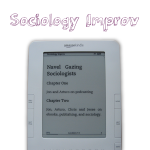 This episode we talk about ourselves.

First, Jon and Arturo gaze at our podcasting navels. We discuss The Society Pages, our plans for Office Hours, and discuss what we’ve learned about producing podcasts and conducting interviews.

Second, at about 42 minutes in, Jesse and Chris join the mix and we navel-gaze as sociologists and academics about e-books, academic publishing, and the state of sociology.

So go grab a fuzzy navel, and listen to improv #9.

Often had the urge to respond to your podcast, but this episode was almost funny in terms of "calling me." So I'll refrain from posting a huge long comment, but I can't not post something.

I like the idea of an ethnographic version of "This American Life." Not that I'd build it myself, but I could probably help in recruiting colleagues to do some of these. In fact, I've been working with a former tv producer who works at Concordia's Centre for Teaching and Learning Services. My guess is that he could help increase the production value.

Speaking of Concordia... Another part of this episode that I found fascinating was the discussion, at the very end, about academic insularity.
As is fairly often the case, my department brings together sociologists and anthropologists. We have a joint specialization and students do cross over rather frequently.
What's a bit more unusual, in my own case, is that I end up teaching in both fields. To be honest, I often feel like it's weird for people to defend their academic turfs so strongly.

Not that I'm special, of course. It's just that once you start crossing boundaries between related fields, you notice that commonalities and differences can be quite fluid, around those boundaries. Wonder what Bourdieu would have said about this.

My background is mostly from the anthro side but it's remarkably easy for me to feel comfortable in some sociological contexts, including "material culture" and "intro to soci." Not that I master the whole disciplinary literature or that sociologists necessarily recognize me as a peer. But it seems to work and students, many of whom take both soci and anthro, make it sound like it's going well.

As for academic publishing and online textuality, there should be a lot more discussion about this, broadly speaking. But maybe it's starting. The American Anthropological Association is in the process of getting feedback from section editors about their publishing model. Through this process, some very interesting things are coming up. This post by Chris Kelty is a useful update on that situation:
http://savageminds.org/2010/08/03/understanding-the-current-future-of-the-aaa/

Anyhoo... Promised myself I wouldn't write too long a comment but it's already getting in dangerous territory, length-wise. So, in the hopes of starting a conversation, at some point...

Finally! We've been trying to goad you into commenting for awhile now and you just now take the hint. :)

I'm sending you an email...

Thanks for the comments Alex!

I'm glad that you liked the idea of the "Ethnographer Life." Maybe we could brainstorm sometime of how we could get such an idea off the ground one day.

Also, I was interested in what you said about working in a mixed Anthro/Soc department and the straddling of disciplines that you do. Implied in your comments is that in such situations the linking of a professional identity with a discipline is less pronounced. That sounds like a nice environment, and one that is probably more conducive to collaborations than what probably occurs in 100% pure-one-disicipline departments (though I am speculating). I'm sure there are some drawbacks as well to having a mixed situation--perhaps some sociological/anthropological perspectives become skewed--but this probably already happens in many departments where faculty interests and methods are quite diverse. Besides I think it's always nice to hear from people who have a slightly different bent on how they view the "social world."

Incidentally, last time I taught social theory I invited this medical anthropologist to give a guest lecture on foucault. At first he was a bit nervous that his expertise might not translate in a sociological context. If anything he cited things that were a little bit over the heads of my students in terms of the lineage of social theory (at least how anthropologists are likely trained in organizing social theory), but the lecture was really great and I think refreshing for the students. He had to adjust his framing a bit to fit the sociological underpinnings of the course, but I think that comes back to that the issue of fluidity that you mentioned. Perhaps teaching in a cross-disciplinary department really hinges on being fluid and being able to deal with fuzzy boundaries?

[...] podcast episode about sociology which included a discussion of the relationships between sociologists and [...]