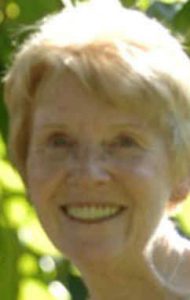 I’m reposting this originally from 6/2/2009, because today is Peggy’s husband John Schmitt’s funeral.

That’s Peggy Schmitt: she’s my boyfriend’s mom. She died at age 68 on April 25, 2009, after a fierce yet sane battle with lung cancer. A remarkable thing happened last Sunday at her memorial service. Friends and family that spanned communities as diverse as an urban homeless (Protestant) ministry and a city Catholic parish outreach program along with teachers from Chestnut Hill independent schools, Philly public schools, and inner city academies, hipsters from the arts and culinary communities, some do-good doctors and one or two do-well lawyers, grieving friends from the very young to the much, much older, just hint at the kind of mind-boggling scope of her life.

Among the many ways in which Peggy was a force for good– for meaningful, substantial, public kinds of good, as well as the more intimate kind– was the discovery that she had been a feminist role model for women who are barely in their 30s, to those nearly in their 60s.

One after another, at our stylized Quaker meeting in Philadelphia, various women spoke at random, interspersed with men, interspersed with teenagers. The stories had thick resonance, as recollections of a life well and intensely lived often do.

The speakers, I started to notice, recalled crashing up against the heartbreak of being young, of wanting something, everything, that-not-this-but-something-else. We delicately avoided too many personal details, but the themes were about how to be kind to ourselves while doing big brave things in a world that wasn’t particularly on our side. We told our stories of Peggy’s compassion and confidence in the face of our pain, just as she had in the face of her own, right up until the until the very end.

Peggy did a lot of “empowering.” But the difference was her solidarity. This woman knew struggle; she recognized it without sentimentality, showed us how to respond without judgment of ourselve–or (and this was very important) others. She told us it was hard, but you can do it. And by telling and showing us what she did, she helped make it so.

Peggy herself had triumphed over hardship while creating a beautiful, beautiful life with four unusually wise, non-conforming, justice-loving children, and a life-long partnership with her soulful husband John. I met Peggy on Memorial Day 23 [now that’s 31!] years ago, and her solidarity from way back then was a lasting resource, and helped me through hard times that inevitably were to come. And here at her memorial were all these other people from different worlds for whom this was also true.

I don’t think that Peggy would embrace the phrase ‘feminist role model’ but I do think she would like the way so many women in her life felt her particular influence. She wouldn’t embrace the phrase because Peggy saw issues of justice as bigger than feminism, and saw people as much more than a reduction to a single or a few attributes. And that is precisely what, for me, makes Peggy one of my feminist heroes.