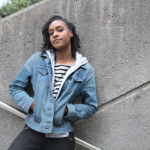 Girl w/ Pen is happy to share the following guest post from Kayla Parker, a senior Sociology major and Entrepreneurship minor at the University of Tennessee, Knoxville. (read more about Kayla at the end of the post)

Being a black woman in America can be absolutely terrifying at times. One of those times was a year ago when I stopped for gas off an unfamiliar exit and left thankful I still had my life. At this gas station, I was both objectified and degraded in a white man’s twisted version of a compliment. When I went inside for gum, one man shouted at me, “Oh you’re a cute little nigglet, aren’t you!” Acknowledging the 15:1 ratio of white men to my black ass, I turned to leave. Only to have one of them follow me. I left the gas station alive, but for a moment, I thought I would not. I remember hitting my lock button five times, like I do every time now. Regularly, I fear that my physical body will be assaulted for being a woman, being queer, or because of the melanin my skin contains.

In my Gender in Society class, we explored the unfortunate realities found at the intersection of race and gender and how those who find themselves there navigate white spaces. In The White Space by Elijah Anderson, Anderson defines white spaces as “overwhelmingly white neighborhoods, restaurants, schools, universities, workplaces, churches and other associations, courthouses, cemeteries, and situations that reinforce normative sensibilities in settings in which black people are typically absent, not expected, or marginalized when present.”

Black spaces, on the other hand, are often depicted as crime filled ghettos and are easily avoidable spaces for weary white people. Growing up black, I quickly learned that it would not be as easy for me to avoid white spaces as it was for white people to avoid black spaces. Finding a way to navigate these spaces is a condition of my existence and historically, navigating these spaces incorrectly has had negative and, sometimes, fatal effects on black women.

For centuries, black women have been persecuted in the United States and reminded that they are outsiders who need to find a way to incorporate themselves within our predominantly white and patriarchal society. Subtle reminders, such as the events that took place on the Napa Valley Wine Train in 2015, are intended to remind black women of how to behave in white spaces. One victim says it best when she explains that their only offense was “laughing while black”. On August 22, 2015, a group of book club members, ten of them black and one of them white, hopped aboard the Napa Valley Wine Train for a fun trip through the Wine Country. Though allegedly laughing no louder than the other inebriated white passengers on the train, they were asked twice by management to lower their voices. Minutes later, they were ordered off the train and turned over to the police.

In The Continuing Significance of Race: Antiblack Discrimination in Public Places Joe Feagin states, “[One problem with] being black in America is that you have to spend so much time thinking about stuff that most white people just don’t even have to think about.” Activities that white men can do without simultaneously thinking of their race, gender, or sexuality are not available to me because I don’t have that privilege. I was born queer, black, and female so activities like buying gum at night put me at a higher risk for assault than most.

To navigate white spaces as a black woman, I am constantly making sure I’m Black but not too Black. To ensure my safety when I navigate these spaces, I stay strapped, but I also make room for white people. When I am walking on the street, I find myself constantly stepping out of the way for white men and I believed I was doing so at a disproportionate rate than my white female friends.

My friend Emma and I decided to obtain some empirical evidence. We sought to discover if white men, whether consciously or subconsciously, make room for white women on the crosswalk more frequently than they do for black women. Whenever the crosswalk had over five people, one of us would stand directly across from a selected white man. When the light would turn red, we’d cross the street and if we had to move out of the way within two feet of chosen white man, we counted it. Emma and I tested this and walked across the crosswalk over 250 times. Emma stepped out of the way for 51 white men. I stepped out of the way for 103.

My overwhelming feeling on this crosswalk was that I did not belong. There were several times when I would move out of the way too slowly and would find myself bumping shoulders with the men I passed. Twice, I found myself stepping out of the way for a gaggle of three to five white men. One time, one man angrily mumbled under his breath when I did not move out of his entitled pathway.

I believe this experiment speaks volumes to the character of our society and negates speculation that we are moving towards a “post-racial” world. For centuries, Blacks were legally banned from white spaces, thus coddling and developing white entitlement to these spaces. Today, Black women face the consequences of the white man’s entitlement.

In this era of Trump, a man who campaigned and won with rhetoric of textbook sexism, misogyny, and xenophobia, we must work to de-normalize the white supremacy that thrives at the expense of other minority groups. Stepping out of the way for a person of color may seem small, but I’m sure we’d see some positive outcomes from us feeling more included on the goddamn street.

After transferring to UTK in 2015, Kayla continued her passioned for business but also discovered that she has a passion for social justice. When seeing the growing wage disparity, racism, and sexism in the world, Kayla began dreaming of ways to make Knoxville more tolerant and more safe for everyone, especially those who are disenfranchised. Combining her love for business and social justice, Kayla worked as a Marketing and Event Planning Intern for Big Brothers Big Sisters of East Tennessee. She helped plan, organize, and host their largest annual fundraiser, Cash 4 Kids Sake which helped pair more positive mentors with impoverished youth in the community. She continues to volunteer for Big Brothers Big Sisters during events. The marketing and event planning skills acquired during this internship with nonprofit, BBBS helped Kayla in organizing and planning events for her on campus organization, Students Who Stand (SWS). SWS is a support group for student sexual assault survivors. Their aim is to provide an inclusive environment to provide support to survivors, increase awareness, and engage in continuous dialogue with the University to encourage policy changes that will make campus safer and more supportive. Recently, Kayla organized, executed, and hosted a Sexual Assault Round Table with University administrators who handle sexual assault cases and activist Kamilah Willingham who was featured in CNN’s The Hunting Ground. She also organized an open mic for sexual assault survivors called Survivor Voices ft. Kamilah Willingham which gave other survivors a safe platform to share their experiences. Kayla has recently discovered her passion for writing and writes on her blog. In her final year of college, Kayla plans to continue to dedicate herself to her studies, grow her organization, and dream of the day she can finally own and love a Great Dane.

You are the best, Kayla. I love you always, and I'm so proud of you. I can't wait to see more of your writing.

Kayla Renee Parker you rock! Loving your passion to write, your compassion for all, your empathy for those in pain, your desire to help the world as well as your dream to rid the world of negativity one ignorant racist at a time! Keep dreaming big and I'll see you on the other side of inequality. Please see what you can do about ridding the world of the Burger King Return of the MAC and cheese commercial!!!!!!!

Kayla you are Awesome! I am so glad to hear students are still standing up for their rights. Keep doing what you are doing. The pay off will come soon.

Ms. Parker this is some of the best reading I have been privileged to in some time. I am a mature woman and an Army veteran. I still experience what you described in this article on a near daily basis; I work at a large Veterans Administration hospital. This past Monday as I was walking outside from one bldg 2 the next a white man of about 65/70 said, "Nice tits." So as i read your "getting gum while Black" incident, and marveled at your "side stepping for white men" experiment, the tears started flowing out of anger, frustration and fear all of my Black female relatives and friends....particularly the younger ones. I am spreading your magical, thought provoking, on-point, same-as-it-ever-was stories and writings like noir pixie dust. Merci ?

Hi Kayla
You already know that you and I are of kindred spirits, from my Linkedin page!
The amount of melanin in dark skinned Humans, and that's what race we are, the Human Race, though we are from different tribes, is about 5mls. or a teaspoon full! I once saw on youtube former KKK member who had a change of heart and put his money where his mouth was and with the use of makeup, walked around as an "African American" sorry, I've never felt comfortable with the definition! Once he experienced first hand the abuse dished out by white Americans, he came to have a better understanding of how it felt to be vilified and bullied for no reason other than your Ancestry, though in his case on this occasion it was a fake Ancestry.
I think you should consider starting up self defence courses because bullies always cower once challenged by a stronger opponent! Keep up the good work.