I’ve long been a fan of Lyn Mikel Brown’s, professor of education and human development, author of six books about gender and girlhood, and cofounder of multiple grassroots organizations and projects, including Powered by Girl, an online media activism campaign for girls by girls. I’ve more recently become a fan of a sophomore in high school named Lilly Bond, whose middle-school activism you may have read about in Time, The Nation, Cosmo, and on feministing. (If not, I urge you to watch this video and learn about it! Lilly rocks.) I put the two of them together to discuss Lyn’s newest book, Powered by Girl: A Field Guide to Supporting Youth Activists. Here’s how their exchange went down. – Deborah 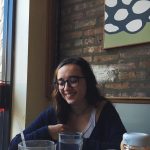 LILLY: My mother used to be a women’s studies professor at Columbia Chicago, as well as Northeastern, so I was raised in a very “girl power” household. I’ve got an older and a younger brother, and my dad’s a high school teacher. In middle school I went through a whole ordeal where the school banned leggings because they were “distracting” to male students. My mother and I did interviews with the news and were written about by several different news outlets including The Chicago Tribune, and Huffington Post. I loved your book. So as I continue my own activism, I’m interested to know: what got you interested in writing it, or even more broadly, what got you into feminism? 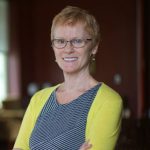 LYN: I remember reading about your activism! My interest in feminism developed in high school. Like so many girls, I was frustrated at the way I was treated because of my gender, both at home (I had two brothers who lived much less protected lives) and at school (I was an athlete and the differences between the support and resources available to boys’ and girls’ teams at that time were startling). As I look back, I see I was also naming injustices that arose at the intersection of gender and social class–the ways my experiences were dismissed relative to other girls or times when I was not seen, heard, or taken seriously because I was a working-class girl.

I read a lot. I asked for a gift subscription to Ms. Magazine in high school. I read Gloria Steinem’s Outrageous Acts and Everyday Rebellions in college. I took Women’s Studies classes, and was introduced to In a Different Voice, This Bridge Called My Back, and Pedagogy of the Oppressed.

Reading Carol Gilligan’s In a Different Voice was an epiphany, an “a-ha” moment. I saw how the field of psychology was not all that different from my high school in the ways it privileged the experiences of boys and men. I applied to Harvard’s Graduate School of Education to work with Carol and could not believe my luck when I was accepted and later asked to join her research team of graduate students and post docs. We became, collectively, the Harvard Project on Women’s Psychology and Girls’ Development. For years we interviewed girls and young women in schools and community organizations–our goal was to learn about girls by listening to girls. We saw girls as experts on their own diverse experiences. Our goal was to insist that psychology as a discipline do the same. 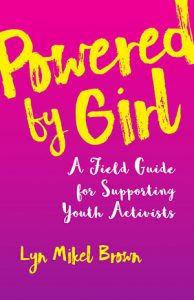 Powered By Girl has its roots in this early work at the Harvard Project. We were developing a way of listening, a way of being in relationship that centered girls. As I moved into my career, I explored more deeply girls’ lives at the intersections of gender, race, and class.

The book also has its roots in community and online activism. For me, it’s never been enough to write about these issues. I really wanted to work with girls to make the world a better, more just place. In 2000, I joined with community activists to create a local feminist nonprofit, Hardy Girls Healthy Women, and then later with colleagues to create SPARK Movement. SPARK, especially, has become a platform for girl-fueled activism. The SPARKteam taught me so much about what girls need to effectively engage in youth organizing and develop social change campaigns.

So I wrote the book as a way to share what I have learned with more people, including my undergraduate students, and in celebration of girls and the power of intergenerational activism.

LILLY: I can definitely relate to the being-treated-differently-than-brothers thing; it’s frustrating to say the least. Your experience sounds a lot like mine. I’ll have to look up some of those books 🙂
I was also wondering, how would you suggest youth activists get involved and active, and be taken seriously? It can sometimes be hard for young girls to be listened to, as I’m sure you know.

LYN: I think it’s so important for youth activists to seek out allies, to find people and groups who share their passion about issues. I also think it’s important to read about the issues they most care about–to move beyond the surface and better understand the root causes of problems. Youth who have researched and explored issues and who can talk with some authority about why a cause matters are much more likely to be taken seriously. They’re also more likely to attract others who share their concerns. And because they see things more complexly, they are more likely to understand how their concerns intersect with others’, which means they recognize opportunities for coalition building.

I also think it’s important to seek out adults who respect youth as change-makers. They can offer perspective, as well as connections with others who have resources and connections. I know this is tricky–it’s an unusual adult who really listens and supports and doesn’t try to take over. So when you find such a person, take full advantage of what they can offer.

LYN: Given the presidential election and the rise in racism, homophobia, sexual harassment, toxic masculinity, and the assault on reproductive rights and the environment, I think we will experience a new era of feminist activism. In recent years we’ve made progress on these fronts, but there’s clear indication that these gains can be taken away if we are not vigilant and prepared to fight.

We are facing wicked problems—problems that are widespread, complex, and interconnected—and finding solutions will require us to work across our differences and in coalition. It will require organization and participation on all fronts. In a recent op-ed for The Guardian, activist Jamia Wilson writes, “history has shown us that power is taken, never given, so resistance is critical if we don’t want our freedom eroded.”

I think we are facing a real challenge to our basic rights as human beings and we will be tested.