Better Journalism is Good for Women

Journalists’ fixation on objectivity resulted in an embarrassment of deceptive comparisons during the election. Reporters’ use of false equivalencies, oversimplifying one shared trait to compare issues, bears a remarkable resemblance to reporting practices that have impeded progress for women. For example, the myth that women abuse their partners at comparable rates as men is partly attributable to false equivalency reporting, distorting what people believe causes domestic violence and how they imagine solving it. 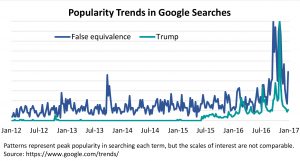 Amid the post-election disappointment that another glass ceiling would not be shattered, there is a silver lining in increased demands for better journalism. New research is asking why people believe lies. The commentary generated by a Teen Vogue article and the cancellation of the television show Good Girls Revolt spotlighted the importance of bringing underrepresented groups to the table. And there is hope that changing how news is reported can alter public opinion. After journalists began reporting climate change denial as misinformation, almost 10 percent more Americans acknowledged the seriousness of global warming than the previous year. Mainstream pleas for quality journalism offer an opportunity to improve reporting important to our democracy, and to women’s equality.

Joanna Rae Pepin (@CoffeeBaseball) is a PhD candidate in the Department of Sociology at the University of Maryland. Her research examines the intersection of the transformation of families and progress towards gender equality. Her current projects investigate the mechanisms behind the way couples share money within their families, and how these in turn shape power dynamics within romantic relationships.