C.J. and her public school teacher female partner have had some version of the following conversation with faculty wives (those married to men) countless times over the past decade:

Wives: “Wow, my husband just works so hard. It’s like I’m a single parent. But academia’s just like that –totally unpredictable. He has to work evenings and weekends to get published and travel all the time to conferences. I have to not work/adjust my schedule/work part time to make sure child care is covered/food is made/house is taken care of.”

C.J.’s public school teacher partner: “Huh. That doesn’t sound like C.J.’s schedule at all. She works 9-5 and we share childcare equally. She does some work after they go to bed and during naptime (and let’s be honest between the 4 am and 6 am wakeups in those early days), but we have a fairly regular schedule and division of labor. 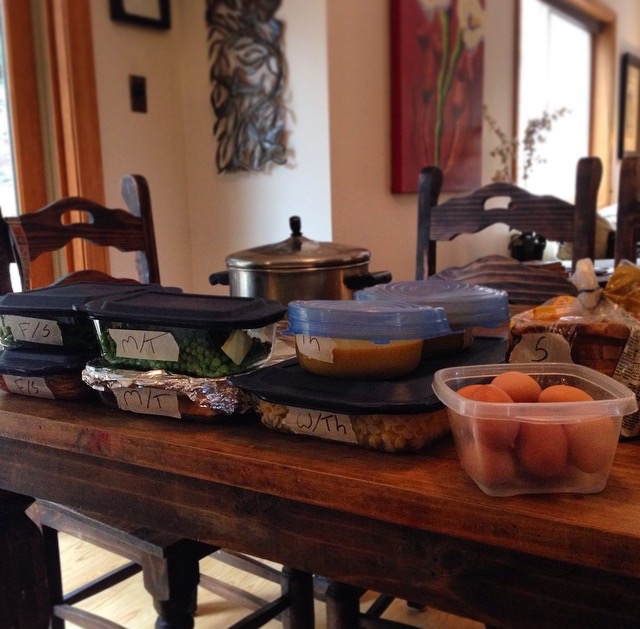 She grocery shops, I take the kids to dance classes while she does so. She puts the kids to bed, I clean the house. Mornings are evenly divided between the two of us (though we do make the kids stay in bed until 6:20 so we can both get in early morning workouts!). Sure there are evening events/conferences/invited talks, but we plan those out in advance to make sure each of our jobs are covered. In fact when C.J. travels the table is covered in Tupperware and prepared meals so she holds up her part of the labor before she leaves (see image). Weird, it’s like our partners work in two totally different industries.”

Over and over and over again. So it was with only a little surprise that I read this headline in the Washington Post: “The Surprising Reason Why Lesbians Get Paid More Than Straight Women.” It turns out Marieka Klawitter, professor of public policy, examined 29 studies “on wages and sexual orientation and found a 9 percent earnings premium for lesbians over heterosexual women.” She suggested that this premium was due to lesbians’ increased levels of education and work experience.

Another another recent study, the article goes on to point out, showed that lesbians who had previously lived with a male partner made 20% less than those who never had lived with a man (though even these lesbians still made more than heterosexual women who lived with a male partner). Indeed, this “male partner penalty” reflects what Philip Cohen points out in this graph about women’s median earnings as a proportion of men’s by education (below). You can see the increase in salary proportionally for those who have not only never had kids, but are also not married.

So what is going on here? We, in consultation with Facebook friends, have a few ideas:

It’s likely a combination of all of these factors and more. But given the difference male partners make in the equation, we can’t shake the notion that domestic division of labor plays a big role here. And while those of us in same-sex couples may be freer to create new scripts for these duties, as Tristan can attest, it’s challenging, but can be done, in heterosexual relationships, too.

In heterosexual relationships, the script is institutionalized such that deviating from it is challenging for many reasons beyond people feeling like “less of a man” or as though they are failing to live up to motherhood ideals. While actually measuring an equitable division of labor is challenging in any relationship, there are social forces working against heterosexual couples attempting for forge egalitarian divisions of labor—perhaps particularly when they have children. Part of this might have to do with actual, authentic collaboration and support. The joys and burdens of relationships need to be balanced, and it’s probably not all that shocking to hear that lesbian couples might be better at this. Heterosexual relationship scripts are institutionalized in ways that make men and women unhappy (though, for very different reasons). Challenging these means forging new scripts—a march that is invariably uphill.

Indeed, we have learned to rely on one another as coauthors in this way as well—passing papers back and forth and trying to assess work/family balance issues, and more. It enriches our work lives. The labor for this blog post itself, in fact, was aided by a queer digital network of people interested in similar issues and ideas and eager to help. In the end, these studies seem to raise as many questions as they answer about sexuality, gender, and the wage gap. And we ought to consider the questions posed as well as those that appear to be answered.

I definitely feel there has been a change in attitude at work since my wife became a SAHM. It hasn't translated to $$$ because there is a published pay grade structure (which I am at the top of) but I feel they treat me more like a male bread winner/head of household now.

As a female academic with a non-academic male spouse, I find it baffling and kind of infuriating that my male colleagues are working late nights and weekends and traveling to tons of conferences (and probably making more money as a result). In my house, my job is treated as the "flexible" one. I'm the one who is expected to drop everything so my partner can go out of town on business trips or work late or go to a work dinner. I'm the one who handles all the late nights and early mornings and sick days with the baby, since I don't *have* to be in the office at 8am and since, even though I don't have tenure, I'm "probably not going to be fired tomorrow if I do a crappy job today."