The Zika Virus: What We’re Really Talking About

As more reports and statements about the Zika virus circulate, the more readers/viewers are reminded of its greatest threat: “malformed babies” or infants with “defects.” Pregnant women are warned against traveling to regions where they could contract Zika as a means to protect their fetuses.

But responses to this disease also reveal a troubling underlying attitude about disabilities and the people who live with them. The message is clear: Disability is something to be prevented at all costs.

Zika is believed to be the cause of a growing number of babies born with “birth defects” like microcephaly (a disorder characterized by a disproportionately small head) and others that affect a child’s vision and hearing. Symptoms of an actual Zika infection are relatively minor, so much so that some mothers who delivered babies with related physical impairments (Zika babies) have trouble remembering even being sick. 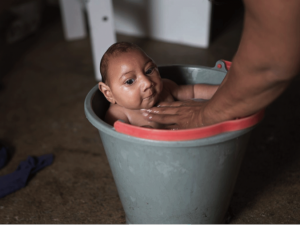 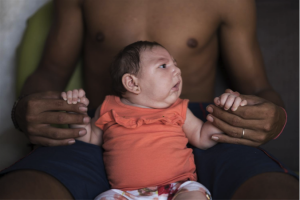 Whereas news stories about Ebola since 2014 have often included images of supine suffering bodies surrounded by white hazmat suits, recent images about Zika feature babies born with small heads on the laps of parents (interestingly, often with their own heads cropped out of the frame). The story of this disease is one of disabled children.

Information about a disease gives rise to fears, which is something the Center for Disease Control and the World Health Organization have to negotiate when a new outbreak of a disease occurs. Remember the H1N1 pandemic in 2009? President Obama declared a national emergency to ensure people took the threat of the disease seriously, yet he played golf the same day to assuage fears that declaration was likely to inspire. People fear the pain, inconvenience, disruption, unknown effects, and expense of a disease as well as the potential loss of life.

As news about the Zika virus in South and Central America spreads, so does its companion anxiety—the anxiety about children being born with disabilities. This is surely a serious concern because these children may require additional care and resources, and in many cases, they are born into relatively poor families.

However, the fears associated with this disease are less about the care that will be needed for the children born with disabilities and more about their existence. Their birth is presented as the devastating outcome of the infection as a death count for Ebola or Cholera might be.

Images of children with microcephaly reinforce this point. We can see the impact of this disease and stare at the “malformed” body with the impunity of a computer screen. On January 27, NPR’s Renee Montagne, who interviewed Monica Roa, reported, “It would be fair to say we’re going to be seeing more of these babies being born with the birth defects of the Zika virus.” And seeing these babies is the real threat of Zika.

People with visible disabilities frequently experience staring and gawking as if they were on display. In the United States, the Americans with Disabilities Act and the Disabilities Discrimination Act are meant to protect against the kind of prejudice that can prevent disabled people from securing work, health care, housing, and the assurance of a quality life. The real disabling aspect of life with a disability is the way able-bodied people perceive, react to, and even ignore disability.

Disease—Ebola, H1N1, Cholera, etc.—expose social inequities like contaminated food or water, restricted access to health care, or a break down in public health. And while disability is not a disease, the Zika virus brings a light to cultural attitudes about disabilities as objectionable.

A life with disabilities has challenges and complexities that vary from one person to the next, but it is a life. We need to stop treating the birth of Zika babies as the outcome, the end point of the narrative of the Zika virus and focus on the lives the children and their families will live.

A simple way to begin focusing on the Zika babies as new lives and not tragedies is to change the language used to discuss them. A simple shift from “malformed” and “birth defect” to impairment or disability changes the story. Rather than a medicalized diseased body with its “defects,” we have a human being with a challenging life ahead.

Sarah Schuetze is a visiting assistant professor of English at St. Norbert College. She specializes in narratives of disease in American Literature, and she’s currently working on a book project called Calamity Howl: Fear of Illness in Early American Literature and Culture.

Not realistic to suggest that birth of a child with disabilities such as those caused by Zika is to be celebrated rather than seen as a tragedy. While it is to be hoped that any parent will love their child whatever it's defects, everyone would wish for child who can fulfil their potential. In this case, it is mainly poor families who can least afford to care for disabled child who are affected. They will have the heartbreak of seeing their child suffer and will worry about its future.

J: Nowhere in the article do I find a suggestion that the disability should be celebrated. The point, if I understand it correctly, is that one possible result of the virus may be a child born with a disability. Changing the wording used in reporting changes the emotional result from a "horrifying tragedy" like Ebola, where we can do nothing to help the victim (so we don't) to "a challenging life" where we can indeed help the victim and their family to lead a full and happy life.

A final point: People with disabilities are not horrors to gawk at, fear and avoid. We are people. We have different challenges than you do. That's all.

Thank you for this. I have a child with microcephaly who is witty, loving, adoring, occasionally a pain in the butt, nosy, and giggly. He makes my world so much better. We all live a happy life. Some of the coverage has been so painful and callous and ignorant.

[…] “deformed,” “terrible,” and “shrunken heads.” As literary scholar Sarah Schuetze points out, “seeing these babies is the real threat of Zika.” Forget accommodating the […]

[…] “strange,” “deformed,” “terrible,” and “shrunken heads.” As literary scholar Sarah Schuetze points out, “seeing these babies is the real threat of Zika.” Forget accommodating the […]

[…] “deformed,” “terrible,” and “shrunken heads.” As literary scholar Sarah Schuetze points out, “seeing these babies is the real threat of Zika.” Forget accommodating the […]