Intersectionality without Women of Color? 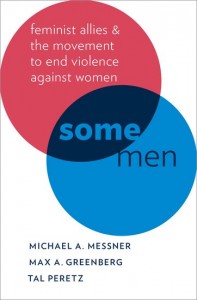 A book should never be treated as a statement of some final Truth. Instead, a book is best put to use as moment of condensed insight that focuses and clarifies ongoing conversations. Still, when you are the author of a book, and engaging in such public conversations, you sometimes learn things in the give-and-take that you wish you had known while writing. This has been so in my recent talks with groups of feminist academics and antiviolence activists about Some men: Feminist allies and the movement to end violence against women, my recent book with Max Greenberg and Tal Peretz.

In my presentations, I outline a central story in Some Men: Inspired by the women’s movement, the field of men’s anti-violence work was constituted in the late-1970s primarily by white men (many of them Jewish), whose work with boys and men was limited by their white and middle class origins. As anti-violence work became increasingly institutionalized in the 1990s and beyond, women activists welcomed men’s growing participation, but the growing visibility of men in the field risked eclipsing feminism, and rendering women less visible. On the other hand, the field was expanding to include more men of color, in part due to a public focus on targeting anti-violence programming to “at-risk youth” (often code for boys of color). The young men of color bring to the field different experiences with race and social class, with man-on-man street violence, and with police and other institutional violence against men of color. As such, they introduce to gender-based violence prevention what we call “organic intersectionality,” an approach that helps to re-infuse social justice values into a field that has become increasingly flat in its politics.

On more than one occasion, African American women have asked questions that challenged the assumptions underlying my genealogy of the field of gender-based violence prevention. Following one talk, an anti-violence worker asked me if my historical outline included African American women who may have felt excluded from the feminist movement, and who defined themselves as Womanists? At another talk, a scholar asked me, “I wonder, how do you define ‘the field’? Women of color have been engaged with anti-violence activism since well before the 1970s.” She mentioned Jim Crow era anti-lynching activism, for instance, as resistance to race/gender-based violence. My mind immediately jumped to mid-Twentieth Century resistance against the forced sterilization of poor and incarcerated women in the U.S. and Puerto Rico as a form of resistance against state violence against the bodies of (primarily) women of color.

This same critic sharpened her point with a reference to a slide in my presentation: “You showed a slide that expressed your concern that men’s movement into anti-violence work might result in ‘feminism without women’. My concern is that your definition of ‘the field’ risks positing an ‘intersectionality without women of color’.”

I believe that my co-authors’ and my efforts to deploy an intersectional analysis in Some Men was successful—possibly even insightful—but only, I see now, within the parameters of how we defined “the field.” When we take into account this womanist critique, we can see how our very definition of “the field” had an unintended consequence. Of course, we duly noted the academic roots of intersectionality, citing foundational works of scholars like bell hooks and Maxine Baca Zinn. We quoted Patricia Hill Collins referring to violence as “a saturated site of intersectionality.” But our definition of “the field” also worked to elide activist work over decades (centuries?) by women of color as the front edge of resistance to interpersonal and institutional gender/race/class-based violence.

Our narrow definition of “the field”—likely grounded in our experiences as three white male feminist academics—is not unusual in feminist scholarship. Sociologist Benita Roth argues in her book Separate Roads to Feminism that the common story about second wave feminism—that white feminism emerged in the 1960s and 1970s, with women of color joining in the 1980s and adding race and class to feminism—is wrong. Roth shows that multiple feminist movements arose “roughly simultaneously,” including Black and Chicana feminisms that, even if not integrated organizationally with mostly-white feminist groups, were in critical dialogue with them. As Roth observes of conventional scholarship on the feminist movements of the 1960s and 1970s, “…looking for feminists of color in white feminist organizations, not finding them, and then explaining their absence makes feminists of color invisible: Not only were they not in white feminist organizations; there is no sense in these explanations that they could have possibly been organizing on their own.” (p. 8).

Defining the parameters of a “field” is an issue in every academic book. However, one must also take pains to think about the implications of those decisions. In the case of Some Men, it would not have changed our book much to have included a short, critical-reflexive discussion of how we were defining “the field” of men’s work to stop sexual assault and domestic violence, and then pointing to what might be left out of this picture and how it might distort the historical story we were telling. The fact that we did not do this is ironic, especially given a central message we learned from many of our interview subjects—Being a man who is a feminist ally means, at base, listening to women. But the devil is often in the details; the question of which women to listen to can never be answered finally, with some set formula. Instead, it requires an ongoing process of reflexivity that includes interrogating the ways that one’s own privileged standpoint, however “progressive” or “intersectional” its intent, will retain some blind spots if it is not in continual dialogue with differently situated people.