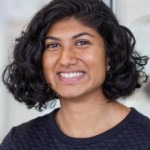 Amrita Singh ’15 is a film studies major and an Athena Scholar. She serves as president of Columbia University Film Productions (CUFP), a Barnard Student Admissions Representative, an IMATS Media Technologist, and she’s also involved with the Athena Digital Design Agency. Additionally, she is an intern with Big Beach Films. She’s never been to Paris, but has always admired French cinema–in particular, Truffaut’s Les 400 Coups– and the city’s art scene both past and present. As an Indian immigrant and francophile, she is eager to better understand multiculturalism within a global context and as it relates to the particular history of Paris, France, and also looks forward to participating in the symposium during Barnard’s historic 125th anniversary.

With Hillary Clinton’s recent announcement regarding her candidacy of presidency and the conversations surrounding the current state of female leadership during a period of revived interest in women’s issues in popular culture as manifested in hashtag campaigns and impassioned speeches by celebrities, I find that the movement pushing for gender equality would greatly benefit in the inclusion of the voices of women that often go unheard. For instance, while the more recent HeforShe campaign importantly advocates that women’s rights affect us all and invites boys and men to the conversation, I wonder what more we could gain in focusing on diversity instead. While it’s incredibly important to highlight that gender equality is not strictly a women’s issue but one that affects us all, when we celebrate men as feminists to gain more traction in advancing the women’s movement what voices do we unintentionally drown out? In a patriarchal society where women still remain largely underrepresented in positions of authority, with their presence in top management positions remaining below 9 percent according to a report by the American Center for Progress despite reflecting the majority of the population, its important to bring these experiences to the forefront of the movement to effectively work towards correcting imbalances of power that permeate nearly all industry sectors. Furthermore when considering how women of color fare far worse in claiming leadership opportunities, the question of solidarity takes on a new form entirely.

That’s why I find programs focused on cultivating a group of diverse girls and young women who see themselves as leaders prove incredibly valuable. Given my quiet personality, I certainly didn’t see myself as a leader until I entered Barnard College, a liberal arts college for women based in New York City. As a student pursuing directing and opportunities in filmmaking, a male-dominated industry that notably lacks diversity with a mere 7% of female directors last year according to the Geena Davis Institute on Gender in Media, I found the space of a women’s college incredibly empowering in demonstrating that leadership takes on many forms and is an ongoing process. I never understood what the big deal was in being a leader, especially since I honestly felt most comfortable on the sidelines. Without having to compromise who I am, in claiming leadership, my voice felt validated. Thus, while many people still question the relevance of women’s colleges today, as an institution, Barnard was founded to challenge systems of inequality and even figures prominently today in the discussion of women’s rights and in addressing pertinent ideas of gender identity. This year marks Barnard’s 7th year in hosting the global symposia series, with Barnard student fellows both interacting with the larger New York community and traveling to Rio, Mumbai and Paris to engage in issues of women and leadership. In exploring feminism within different cultural contexts, the program relies on the diversity of experiences to better understand how identity impacts one’s individual encounter with systems of inequality. By celebrating the importance of including a multiplicity voices, both in theory with inspired discussions relating to relevant social issues, and in practice by way of the vast backgrounds of the leaders participating in the program, the symposium refocuses the conversation on feminism by tackling issues of representation directly. From leading artists including Panmela Castro who engages with activism through her vivid graffiti on the streets of Brazil to Helene Gayle, CEO of CARE USA, an organization fighting poverty, the symposium in New York City draws from the rich experiences of a diverse group of leaders to present a number of perspectives on explicit challenges that women face at a global level. 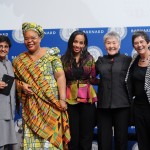 I had the opportunity to collaborate with high school students abroad in the Paris Young Women’s Leadership Workshop and amplify their voices by encouraging them to embrace their identity as a platform for their leadership. Given the different cultural settings a part of each city explored through the Symposium, the exchange between Barnard students and participating high school students provides invaluable learning opportunities on both ends. Using these interactive workshops to inspire participants in developing social action projects empower these young women to see themselves as leaders who can actually take the steps to bring about this change in their respective communities. In cultivating a global network of individuals who embody what it means to be a leader in this day and age, the Barnard Global Symposium connects women of different ages, backgrounds and beliefs across the globe to take part in the discourse of women and leadership as agents of change, impossible to ignore. As Global Symposium Panelist, Ndili Nwunelli said, “As young people we are told we are leaders of tomorrow. Why tomorrow? We can be leaders of today and tomorrow.”