The Duggars and Sexual Conservatives

We imagine most are now aware that the Duggar family of 19 Kids and Counting fame has come under criticism for their handling of their eldest son, Josh’s, behavior. According to police reports, Josh Duggar engaged in nonconsensual sexual contact with several younger female children, at least some of whom were his sisters. You can see the details here, here and here.

The Duggars have a record of anti-gay, anti-birth control, anti-choice and anti-trans stances. Michelle Duggar even recorded robo-calls for a discriminatory statute aimed at denying equal rights to trans citizens of her state. These public stances, along with their encouragement of sexual abstinence until marriage and a prohibition on cross-sex touching until engagement, seem incongruent with their public “forgiveness” of Josh for his sexual transgressions. Jessa Duggar’s father-in-law stated, to much condemnation:

Many times it is simply lack of opportunity or fear of consequences that keep us from falling into grievous sin even though our fallen hearts would love to indulge the flesh. We should not be shocked that this occurred in the Duggar’s home, we should rather be thankful to God if we have been spared such, and pray that he would keep us and our children from falling.

This seemingly quick forgiveness and “there but for the grace of god go I” attitude toward sexual sins appear incompatible with the family’s harsh stance regarding other sexual or gendered behavior they regard as sinful. 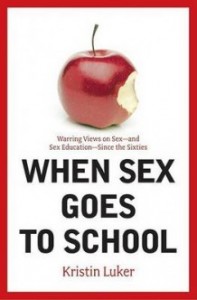 In response to the Duggar’s handling of Josh’s behavior, critics suggested all or some of the following: the family is a sex cult, hypocrisy is endemic to religious zealotry, and abstinence and strict sex practices are forms of sexual deviance just like child molestation. We would like to add to these analyses and provide a slightly different read by suggesting that the Duggars are not outliers—but perhaps illustrate best the argument that Kristin Luker made in her book When Sex Goes to School about sexual conservative and sexual liberals.

In investigating American adults’ views on sex education, Luker documents two camps that emerged after the sexual revolution of the 1960s: the sexual liberals and sexual conservatives. These liberal and conservative positions do not map neatly on to political perspectives, but are rather divided by their views of sex. Luker found that conservatives believe that sex is inherently sacred and meant for marriage. To keep sex within the confines of marriage, conservatives focus on rules and boundaries to control individuals’ out of control sexual natures. The assumption is that people are fallible and without these regulations they will fail. Sexual conservatives are very focused on the danger in “letting pleasure loose”. In the Duggar’s world, this letting loose could be something like holding hands before marriage. Liberals, however, view marriage as just one of many acceptable options for sexual activity. Sexual liberals focus on making good decisions. They believe that humans can make good decisions when they have the information they need to make that decision. In terms of sex, this means knowing about sex, its pleasures and its dangers.

In this sexual conservative perspective, there’s little to distinguish different forms of sexual “fallenness.” For instance, Sarah’s research among evangelical Christian men who were, like the Duggars, invested in sexual abstinence until marriage, indicates that masturbation, lust, pornography, and same-sex desire, are all sins that, to borrow Luker’s language, if “let loose”, can disrupt the goal of abstinence until marriage, thus also disrupting the notion that sexual pleasure is exclusive to heterosexual marriage. When the men in Sarah’s research were tempted by, or engaged in such sinful behavior, they were not met with scorn, hatred, or abandonment, but with understanding and recognition of the struggle they were enduring.

From this perspective, when a distant family member talks about Josh’s fallibility and indicates that without the proper social controls any of us could be in his position, this statement is congruent with the perspective of sexual conservatives. From the sexual conservative camp, the quick forgiveness of his actions is not incongruent or hypocritical when juxtaposed with the Duggar’s views on gay marriage or trans rights, but completely consistent as they are all examples of sexual fallenness. In other words, repentant pornographers, ex-gays, and apologetic adulterers are totally fine. Josh repented. The Duggars and their supporters are not being hypocritical, they are being consistent with views of sexual conservatives.

It is important to see the Duggars not necessarily as a “cult” or as sexual outliers, but as a very provocative example of the logic of sexual conservatism and all that entails. This episode represents a line of thought that is more common than it seems when we pathologize the Duggar’s behavior rather than investigating it.