The Whiplash and Dream of Raising Boy/Girl Twins

Raising pre-school aged boy/girl twins in a rigidly gender-bifurcated universe where attitudes sloooooowly change is one big gender bender, my friends–I swear. Some days, I get whiplash. Let me show you what I mean.

Last month, the Australian-based initiative called No-Gender December made a valiant stand against the gendered marketing of toys to our children, raising both eyebrows and awareness. I loved it. Huzzah and yay!

But with January comes announcement of the arrival of Heartlake City, a “girl” section of Legoland Florida’s hit theme park scheduled to open this summer. Look at the picture (below, right), and read this post about how the introduction of the girl section (which includes a shopping mall, a convertible where girls can take selfies) implies that all the other sections (dinosaur exploration area, fire station, city streets, pilot school, archeology-themed ride, science area, jousting, playground) are for boys. The creepy tune and lyrics of “Girl Land” from the Free to Be You and Me album come to mind (“you go in a girl, and come out a lady!”). Hiss. Boo.

I love Lego, and so do my kids, and I hate that Lego bricks themselves—that once gloriously gender-neutral toy, a Danish toy, for irony’s sake—now have gender.

But the same day I learned about Legoland’s launch of Girl Land, I came across a poster in a coffee shop located on my town’s main drag announcing that come February, About Face Theater is bringing A Kid Like Jake to the Greenhouse Theater Center, along with “weekly post-show discussions around the topics of gender development in children, contemporary parenting and discovering identity for young people.” Huzzah and yay! 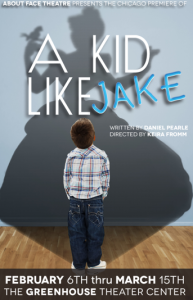 This play by Daniel Pearle, an urban drama about an upscale couple annoyingly obsessed with getting their kid into prestigious private kindergarten (the kind that cost an annual $40K), is simultaneously a modern portrayal of a kid with enthusiasms for gender-variant play. The poster I saw in the coffee shop features a little boy, backed turned to the viewer, gazing longingly at a wall onto which a shadow image in the likeness of Disney’s Cinderella is projected at five times his size. “Why can’t a boy be a princess?” the caption reads. Right there on Main Street. Granted, mine’s a progressive town. But I still find cause to celebrate the fact this play, and with it its sweet and beautiful poster, is going around the nation. So I repeat: huzzah and yay!

This whiplash reminds me of a handmade book made by some kid in my elementary school (hello Greeley!) and housed in the school’s library. The book’s title was Fortunately, Unfortunately. On one page, something good would happen to the pint-sized protagonist. (“Fortunately, when I woke up today, Mom made me my favorite pancakes.”) The next page featured the reverse. (“Unfortunately, we were out of syrup, so I had to eat them plain.”) Something delicious would happen, then something annoying would happen that would take that deliciousness away.

That’s how I feel about our culture’s one-step-forward, two-steps-back slouch toward a world in which a very young boy (like mine, pictured up top) can wear pink and purple legwarmers without bystanders batting an eye. He’s five, and who cares. And fortunately, my two five-year olds go to a remarkable preschool, where messages like this one are plastered on the walls:

Unfortunately, not everyone in our wider community may feel the same way as my preschool community does. Yet.

Fortunately, my daughter does. When my son told his twin sister he was jealous of her new legwarmers, she let him “borrow” them without missing a beat.

Unfortunately, he came home without them on. (Not sure what happened at school – highly likely he just got hot.)

And for one final moment of whiplash, while walking down a main street in town the other day returning to my office, I passed by the new French bakery, with a sign on its door that read “Nous sommes Charlie.”

It broke my heart. And then my spirits rose again.

Because right next door, at an indoor playspace for babies and tots, I saw this:

“Raise courageous people,” the rainbow-colored sign in the window reads. There’s a second sign above the first, with a quote from Matisse: “Creativity takes courage.”

Though I may have whiplash, I, too, have a dream today.

These are beautifully wrought thoughts on many things that struck me this month, too. My two daughters, undisturbed in childhood by what might be for them and what might be for a nonexistent brother they didn't have, played with Legos joyfully. Their favorites were the ones that encouraged them to build towns and cities, and the Lego Friends came out when both were too old to get caught in it. My favorite wisdom on what it meant to be a girl comes from the old Roseanne sitcom, when one daughter gets her period and immediately goes to throw away all her sports equipment, lamenting that she doesn't WANT to start wearing makeup and dresses like her gender-stereotyped older sister. Her mom comes in, discovers the sports purging, and talks her out of it, saying, "These are a girls' things as long as a girl uses them."

So are Legos. So are princess dresses and leg warmers, and so are satirical cartoons and the art of Matisse, and so are all those things boys' things.

Rock on, Deborah. Thanks for keeping your readers and your family at the forefront!

I love this post! Such a great way to show how far things have progressed, all the while regressing and standing still and twisting and turning and on and on!
Thanks, Deborah!

[…] courageous people. Raise courage, people. Though I may have whiplash, I, too, have a dream today. (The Whiplash and Dream of Raising Boy/Girl Twins) Deborah Siegel Dr. Deborah Siegel is an expert on gender and politics, and as she describes […]