The Case of the Cursing Princesses

In the last 24 hours I’ve seen a range of responses break out in reaction to this video: “F-Bombs for Feminism: Potty-Mouted Princesses Use Bad Word for Good Cause.”

Some commenters fall immediately into the “cursing = bad” camp and are offended by the language, but for those not turned off, the other initial reaction seems to be glee.  There’s an “I can’t believe they’re saying that!” kind of catharsis that accompanies watching little girls drop f-bombs all over the place and show some righteous rage over the injustices they are bound to face due to gender inequity.  What seems less present in the general reaction, and concerns me the most, is how these girls — and these causes — are fundamentally being leveraged by a T-shirt company.

For years I’ve written about what I call “fauxpowerment” — the “rah-rah, you go girl,” feel-good phrases and gestures that are meant to pump girls up with confidence or a newly varnished sense of self-esteem (often enough through a makeover) but, in fact, undermine any real confidence building as these messages reinforce that girls’ looks are paramount or that a quick, pink band-aid slapped over a deep wound makes everything better.  For those in the Girls’ Studies community or who work at well-developed programs designed just for girls, these attempts are not only insultingly facile, they are understood to be downright harmful and counterproductive. Worst of all is seeing corporations leverage girls for commercial purposes, a tradition, maddeningly, that seems ongoing.  That’s the category in which I would put the “Potty-Mouthed Princesses” advertisement — what it fundamentally is.

FCKH8, the company behind the ad, initially responded positively to my queries about their intentions, what charities they are donating proceeds of each sale to, and if the girls in the video were tightly scripted or had any input into the video, but I have not heard back again.  I hope to update this post if I do.  On their home page they cite their mission as being a “for-profit T-shirt company with an activist heart and a passionate social change mission: arming thousands of people with pro-LGBT equality, anti-racism and anti-sexism T-shirts that act as ‘mini-billboards’ for change.”

Their T-shirt slogans are meant to be provocative, and in some cases, it seems, also plagiarized, as the Feminist Majority Foundation has had an ongoing “This is What A Feminist Looks Like” campaign since 2003, with President Obama in the shirt on their 2009 cover.  More recently, FCKH8 came under fire for allegedly exploiting the events in Ferguson to sell their antiracism gear. 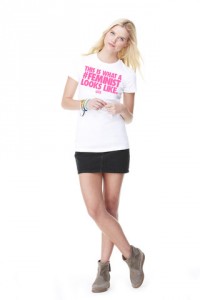 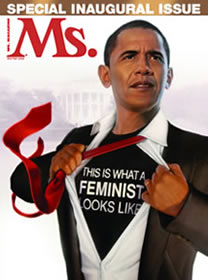 A quick look on the FCKH8 website reveals they barely sell T-shirts in children’s sizes.  So, why use child-models in what is essentially an ad? The answer seems painfully obvious.  Anxiety about girls is pervasive in American society, if manifested through various channels.  The value of seeing girls, in princess costumes no less, letting loose about the gendered inequities they face, never mind parade across the screen asking which one of them will inevitably be raped in her lifetime, is designed to shock.  FCKH8 is tapping into a cultural zeitgeist by putting girls in princess costumes and then breaking with stereotype by having them swear up a storm and shout out their fury, complete with very adult-like, fed-up gestures and the waved middle finger.

The reaction FCKH8 has carefully cultivated is the drama that results from presenting such high contrasts — furious princesses calling out the system in which they are entrapped, flipping off the patriarchy, and angrily speaking out.  The power of seeing this dramatized speaks to how coded and closed these systems are — “little girls” under most circumstances would hardly be allowed to swear with such abandon, if they even wanted to.

Is there something cathartic about hearing these injustices called out and denounced with anger? There is.  For those furious about gender inequality it can be gratifying hearing these issues called out — when the adult women in the ad step forward. This isn’t how most girls under 10 would speak and the girls used, albeit likely paid models or actresses taking on a role, are props.  While many commenters reported that their (usually teenage) daughters expressed delight at seeing girls let loose with things they cannot say — again a moment that reveals how girls are stifled — there is hardly any empowerment when the girls didn’t write these scripts themselves and are, fundamentally, co-opted into a purportedly radical company’s for-profit campaign through their “walking billboards” which work to questionable effect.

I‘ve always loved Peggy Orenstein’s coined phrase “empowertainment” — a moment when companies use a generic sense of “sisterhood” or a cheery pro-girl message to essentially sell products. The criticism of this practice is (necessarily) ongoing and FCKH8, a company that I’m certain will defend its practices as radical and empowering, is doing exactly this.  In Andi Zeisler’s excellent round-up of the history of “femapowerment” or, as she coins it, “empowertising,” she calls out the companies that, beyond girls, are co-opting feminism — or their brand of it — to essentially sell products.

Criticism of the company has been swift, and wide, but the click-bait appeal of this video will probably outnumber its detractors.  A few years back the video “Riley on Marketing” went viral as the outraged Riley decried the limitations imposed upon her by gendered marketing.  There was nary an f-bomb in the mix.  This was a real girl, speaking out unscripted about the injustices she knows.  The authenticity in her voice and in her message garnered almost 5 million YouTube views and carries far more power than FCKH8’s gimmicky, egregious act.

So, what were the answers they initially provided re "their intentions, what charities they are donating proceeds of each sale to, and if the girls in the video were tightly scripted or had any input into the video"?