Joanna Pepin is a sociology graduate student at the University of Maryland. This column is cross-posted with small revisions from Pepin’s blog Representations of Romantic Relationships. She tweets at @coffeebaseball.

The Council on Contemporary Families published a report last week suggesting the gender revolution has rebounded. Using data from the General Social Survey (GSS), sociologists David Cotter, Joan Hermsen, and Reeve Vanneman provided an update on their 2011 American Journal of Sociology article reviewing trends in public attitudes on gender. This seemed like a great opportunity to try my hand at replicating and extending their sociological research by looking at American high school students’ gender attitudes. This is an important population to investigate in order to catch young people before they’ve spent time confronting (and perhaps therefore justifying) resistant social structures and adulthood realities the way older people have.

I used data from Monitoring the Future (MTF), a survey given annually to a nationally representative group of American 12th grade students. Three of the four egalitarian attitude variables in the GSS are also available from MTF and are asked in the same manner but with a five-point agreement (rather than four-point) scale: disagree, mostly disagree, neither, mostly agree, and agree. The fourth variable regarding attitudes about female politicians was worded differently than the GSS on the MTF surveys: Women should be considered as seriously as men for jobs as executives or politicians. I have previously replicated Cotter and colleagues’ original publication, so I feel reasonably confident that methodological differences are not contaminating my results.

What is similar. I charted the averages for the four gender attitude questions below. Noticeably, the item on women in politics is an outlier and remains steadily high over time. Agreement that working moms have warm relationships with kids was consistently higher than average agreement in the GSS by about 10%. Disagreement with the statement that preschoolers suffer when mothers work began at about 30% and has risen to around 65% for both GSS and MTF respondents. 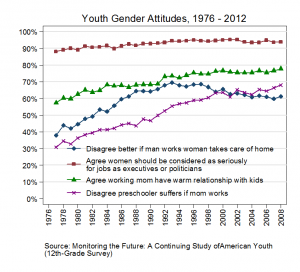 Wait, more tolerance for gender stereotypes? Most interestingly, disagreement with the statement that it’s better if a man works and the woman takes care of the home peaked in the 1990s at about 70% and has declined to 60% disagreement by 2012. The question itself sounds so outdated—after all it was written in the 1970s when the GSS and MTF surveys were first begun. And one would expect it to be fully dismissed in a gender egalitarian world, but my results show that fewer young people dismiss it. The pattern is strikingly different than that of the averages for the adult population in the GSS. Today, high school seniors are less likely to disagree with these stereotypical gender roles than the general population. In 2012, 60% of MTF respondents disagreed with the statement compared to about 70% of GSS takers. 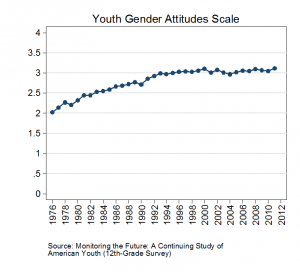 In the updated report by Cotter and colleagues, the scale of the combined averages stalled out through the 1990s and early 2000s, but started to pick up again by 2006. However, the youth scale presented below shows a continued stall. From the graph above, it’s obvious that attitudes on women in leadership positions has remained high over time and therefore is not accounting for any changes. It appears that the increase in agreement that men should work and women should take care of the home is offsetting the rise in egalitarian attitudes measured by the other two items.

The gender gap is the same. Following Cotter and colleagues’ report, I also graphed the scale by sex.  Similar to that of the adult population, young women persistently show more egalitarian attitudes than young men in the MTF data. These differences also are consistent over time, with both stalling in the early 1990s. 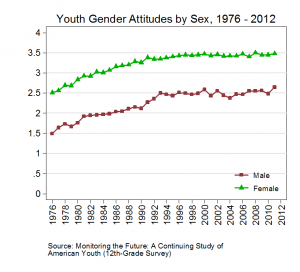 I skipped replicating the gender attitudes scale by political ideology because of the large number of respondents who answered “I don’t know” when identifying their political affiliation. In place of the trends by education (as all of the MTF respondents are currently seniors in high school), I took a look at the scale by their mother’s education. There appear to be no remarkable differences by mothers’ education, and all groups increased their egalitarian ideology over time and showed remarkably similar patterns.

Overall, the high school seniors show some different patterns in gender role attitudes than the greater population. Notably, young people do not show a resurgence in disagreement that it is better for men to work and for women to take care of the home. In fact, they show a reversal. This is especially puzzling given their high agreement that women should be considered for leadership positions. 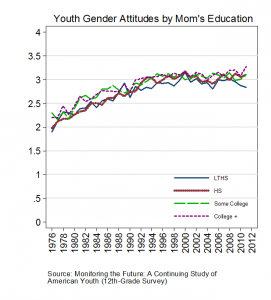 Speculatively, youth express commitment to equality but simultaneously pair these egalitarian attitudes with beliefs about stereotypical gender roles. Women are viewed as peers in entering the work force, but continue to be responsible for labor at home. On the other hand, there does seem to be a persistent increase in youth agreement that working mothers do not harm children.

I will continue to watch the Millennial generation. As noted by Cotter and colleagues, their egalitarianism is high. However, their egalitarian ideology is not consistently increasing over time. I’m not yet convinced that the stall in the gender revolution is over.