Reflections on #BringBackOurGirls and the Missing Discourse of Rights

This month, guest contributor Emily Bent looks at what’s missing in girl power discourse. Emily Bent is Assistant Professor in Women’s and Gender Studies at Pace University in New York City and the Co-Chair of the Working Group on Girls (WGG) at the United Nations, a coalition of over 80 nation and international non-governmental organizations dedicated to advancing the rights of girls around the world. Her work has been published in the Global Studies of Childhood Journal and Sociological Studies of Children and Youth, where her article, “A Different Girl Effect: Producing Political Girlhoods in the ‘Invest in Girls’ Climate” was recently named Outstanding Author Contribution in the 2014 Emerald Literati Network Awards for Excellence. 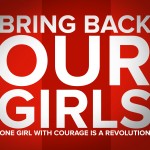 It’s been six weeks since the mid-April abduction of nearly 300 schoolgirls in Northeastern Nigeria. Despite international attention, public outcries, rallies, petitions, social media campaigns, Google chats, and coordinated military efforts, the girls are still missing—and the world (or at least the mainstream media) appears to have lost interest.

According to Hayes Brown at ThinkProgress.org, Google analytics tell us that while the hashtag #BringBackOurGirls reached peak interest around Friday May 9th, it all but dropped off the radar by the following Monday. As of early June 2014, it appears that we might not be any closer to finding these girls than at the start of the #BringBackOurGirls initiative.

So, where do we go from here? What can we learn from the successes and failures of this political project? And perhaps most importantly, how do we ensure the continued educational safety and opportunity for all of our girls?

We should begin by re-thinking the discursive (im)possibilities of #BringBackOurGirls and the call more broadly to “invest in girls.” Too often, this neoliberal, postfeminist, and girl power discourse gets deployed as the only feasible solution to gender-based inequalities in schools. But if we’re serious about the importance of girls’ education across the globe, then we need to start reframing the following discursive threads:

If we look at popular slogans and arguments for the importance of girls’ education, it is rather striking that the discourse of rights is almost entirely absent. From The Girl Effect’s “invest in a girl and she will do the rest” to Girl Rising’s “one girl with courage is a revolution,” we can see similar messages about the capacity of individual girls to overcome all the odds. Moreover, we understand that the possibilities of her transformation stems from her ability to become “responsible for [her] own regulation,” as Valerie Walkerdine puts it. This neoliberal girl power framework removes the role of the family, community, and government. Instead, as I’ve argued elsewhere, it “encourages girls to take personal responsibility for their successes and failures” inside and outside of the classroom.

Because of the limitations of neoliberal girl power, I suggest that we begin using the discourse of human rights to advocate for girls’ education and girls’ human rights more specifically. We have an arsenal of human rights platforms at our disposal. Article 28 of the Convention on the Rights of the Child guarantees the right to primary education and access to secondary education, while Article 2 protects children from violence and discrimination based on sex, race, language, ethnicity, birth status and so forth. The Beijing Platform for Action, Section L addresses the unique needs of the girl child in the areas of education, health, labor, cultural practices, gender-based violence, political life, and the media among others. CEDAW similarly calls for women and girls’ “human rights and fundamental freedoms in the political, economic, social, cultural, [and] civil” life.

It’s time to start leveraging the weight of human rights platforms in the movement for girls’ education. We need to stop telling individual girls to “start a revolution” and “do the rest” and instead, work more collectively to demand that girls’ human rights be respected. Nigeria has signed onto the CRC, CEDAW and Beijing Platform for Action. Why not start holding governments accountable for what they pledge to do for girls in their country? We can’t do this with the slogan of neoliberal girl power.

One of the most troubling aspects of the “invest in girls” narrative is how this discursive move positions girls as objects and economic assets but never subjects in their own right. The justification for educating girls tends to follow a similar pattern; we document all of the good things that happen to a country’s economy and the global marketplace when a girl is educated, but we never speak about the girl as an actual person.

For example, Nicholas Kristof notes in The New York Times that girls’ education “can, in effect, almost double the formal labor force. It boosts the economy, raising living standards and promoting a virtuous cycle of development.” Investing in girls gives us the opportunity to “harness” and “unleash” the potential of girls’ economic productivity. Indeed, Tara Abraham of Girl Rising states, “the benefits have been well researched… and that is the potential we want to harness and unleash on countries like Nigeria.”

I am deeply uncomfortable with the language of investment returns, of harnessing and unleashing. It makes girls out to be something less than human. It denies girls of their subjectivity and human rights and, as Heather Switzer argues, it “empt[ies] girl subjects of agency.” I understand the purpose of this language is to capture investors and convince the international community that we need to pay attention to girls, but there must be a way to do this without reifying girls’ objectification under the auspices of economic development.

In this fast-paced, media-saturated world, I understand the power of a clear, bold message that captures an audience and inspires individuals to take action. But, I think we need to rethink the overreliance on simplistic stories of sociocultural and geopolitical change. It doesn’t happen just because one girl went to school or one person donated a backpack; it happens much more haphazardly than we would like to admit.

Switzer also notes that the neoliberal girl power narrative “reinforces a fundamental (post)feminist development dictum that simply providing school will de facto empower [girls… even when we know] that education is not a gender-neutral public good; schools are not always safe spaces for girls… and female education does not guarantee the fundamental gendered social transformations… required for her to ‘call the shots.’” In other words, girls’ empowerment takes more than a school uniform; it requires buy-in from her family, culture and society, government, and the global community. It is time to get comfortable with a more complicated (and often contradictory) picture of social change and empowerment. Because the solution is a lot less clear than we would like it to be.

#BringOurGirlsBack represents both the tragedy and opportunities created by injustice. I thus see this as a moment to reflect upon what is still needed to achieve girls’ human rights. What do we, as a global community, need to do to ensure that all girls can attend school safely? And what do we need to do to hold perpetrators of violence against girls accountable for their actions, whether in Northeastern Nigeria or Santa Barbara, California?

Readers may also enjoy the scholarship cited in the recent "There's Research on That!" about #BringBackOurGirls: http://thesocietypages.org/trot/2014/05/15/bringbackourgirls-needs-more-than-a-media-boost/

Emily, Thanks so much for this! I've been trying to keep up with developments but it's been hard to follow everything emerging. Your framing of the "hashtag activism" and of the larger ways in which helping girls is "sold" or promoted to the public is wonderful. I'd love to share this piece. My thanks again.

Well said, Emily! The ways in which individual girls are supposedly the agents of economic change flies in the face of feminist insights. That there are no individual solutions and that women and girls have human rights that must be championed and fought for may sound old fashioned to some, but, to paraphrase an old adage, I'm waiting for 'post patriarchy' before I buy into lots of 'post feminist ' rhetoric.