By: Tristan Bridges and C.J. Pascoe

Alice Walker, the Pulitzer Prize winning author of The Color Purple, coined the “colorism” term to define: “prejudicial or preferential treatment of same-race people based solely on the color of their skin” (here: 290). Colorism occurs when groups of people are discriminated against in systematic ways on the basis of skin color alone.  The differential treatment results not simply from being recognized as belonging to a specific racial category, but from the values associated with the actual color of someone’s skin.  And it is one way that social scientists have looked at inequalities within as well as between racial groups.

Some of the social scientific findings that provoked more research on colorism uncovered skin color-based disparities within the criminal justice system. Research has shown, for example, that skin color affects the length of time people are sentenced to serve in prison, the proportion of their sentences that they do serve, and the likelihood of receiving the death penalty.  This research has less often focused explicitly on intersections with gender inequality.

A recent article in Race and Social Problems by Lance Hannon, Robert DeFina, and Sarah Bruch—“The Relationship Between Skin Tone and School Suspension for African Americans”—addresses these intersections centrally. They analyze the relationship between race, skin color, gender, and the school suspension.  Similar to what research on criminal sentencing has shown, Hannon, DeFina, and Bruch found that darker skin tone was significantly related to the likelihood of being suspended in school.  African American students with darker skin had a higher probability of being suspended than those with lighter skin.  But, upon closer investigation, they discovered that that finding was primarily driven by the fact that skin tone has a much larger impact on African American girls than on African American boys. 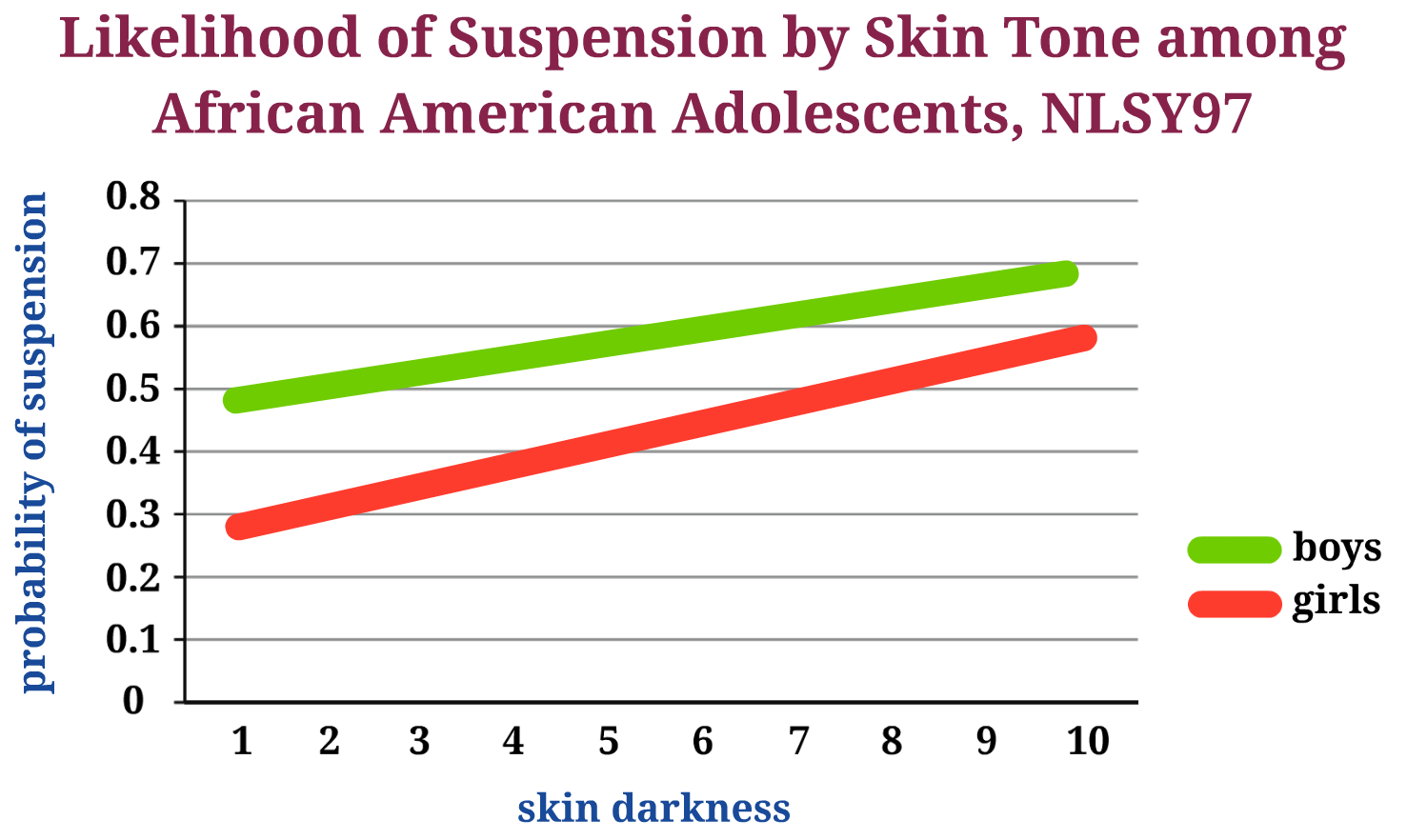 As you can see from the graph (adapted from the article), African American boys are more likely to be suspended at every skin tone than are girls.  But the line associated with African American girls is steeper and the relationship was more statistically significant.  This indicates that darker skin has more of an impact on the likelihood of being suspended for African American girls than for African American boys. This is a finding that can be looked at in more than one way.  One way we could look at it is to suggest that colorism does not seem to be as large of a factor in African American boys’ experiences with school authorities as it is for African American girls.  But, it also might speak to a cultural tendency to criminalize black masculinities in general.  Indeed, the lightest skinned black boys in this sample were only slightly less likely to be suspended when compared with black girls who had the darkest skin tones.  Simply put, questions about skin color are shown here to be a more meaningful question for black girls than boys in making sense of their experiences with school authorities and punishments.  For boys, the mere fact that they are black is related to higher probabilities of punishment.

In some ways, this finding about disproportionate punishment of African American boys reflects supports Ann Arnett Ferguson’s classic research on black boys’ experiences in school—Bad Boys: Public Schools in the Making of Black Masculinity.  Ferguson’s ethnography of a low-income public school demonstrated the ways that black boys were constructed as qualitatively different from white boys by examining gendered and racialized meaning systems structuring interactions in school. Ferguson coined the term “adultification” to describe the ways in which African American boys’ behavior was understood by faculty and administrators (as well as adults outside of the school).  Ferguson explains adultification as the way in which African American boys’ “transgressions are made to take on a sinister, intentional, fully conscious tone that is stripped of any element of childish naïveté” (here: 83).  Ferguson found that young black boys did not benefit from the “boys will be boys” frame often used to casually excuse white boys’ more socially undesirable behavior.

This “adultification” of African American boys’ youthful transgressions has serious consequences in a society that increasingly criminalizes childhood behavior.  Indeed, in Dude, You’re a Fag: Masculinity and Sexuality in High School, C.J. discovered a similar penchant to punish black boys for using the word “fag” at River High in ways their white peers were not. The only boys she ever saw punished for sexually harassing girls or using homophobic epithets were African American boys, in a school that was majority white—and a school in which white boys engaged in those practices on daily basis. Research on school expulsions documents how African American students are significantly overrepresented in so-called “discretionary” expulsions, or expulsions for offenses that are subjectively, rather than objectively judged.

Hannon, DeFina, and Bruch access data that add a new dimension to these findings on gendered and raced disparities in educational and punishment practices.  As they write,

The weaker and less consistent correspondence between skin tone and suspension for male African American students might also reflect significant interactions between race, gender, and skin tone. Unlike black women, the controlling image of black men in the United States is of a dangerous, criminal predator… The less pronounced effect of skin tone for men could reflect the pervasiveness of the ‘Criminal Black Man’ stereotype. That is, the stereotype may be so strong that the effect of categorical racial membership for African American males makes any finer distinctions based on skin tone of secondary importance. Thus, the different meanings of race for black men and women and their intersections with skin darkness might produce alternative outcomes with regard to suspensions (or the same outcome, but for a different reason). (here: 292)

This research underscores the need to think about gender, race and skin tone as co-constitutive categories. Only by understanding them (as well as others) as intersecting forms of inequality can we begin to paint a picture of discriminatory educational practices that result in the targeting of African American young men.

[…] Alice Walker, pertains to the social values and meanings attached to skin color. She, personally, defines it as “prejudicial or preferential treatment of the same-race people based solely on the color of […]