Girl w/ Pen is pleased to announced the addition of a new columnist to its team.  Dara Persis Murray is an expert in the intersections of beauty and feminism as they occur online and in consumer culture.  Her monthly column, “Mediating Beauty,” will delve into this topic. Without further ado, here’s Dara!

Robin Thicke’s “Blurred Lines” has been heralded as the song of summer 2013. Since its release, media discourse has cited the music video for the song, in which models dance suggestively around Thicke, T.I., and Pharrell (the song’s male contributors and writers), as a blatant objectification of women. This criticism has been especially strong for the Not Safe for Work (NSFW) version of the video, in which the women are topless.

When questioned about the controversy, Thicke positioned “Blurred Lines” as “what great art does. It’s supposed to stir conversation, it’s supposed to make us talk about what’s important and what the relationship between men and women is, but if you listen to the lyrics it says ‘That man is not your maker’ — it’s actually a feminist movement within itself.”

Thicke’s perspective challenges me to ponder how meanings of feminism have become so misconstrued in popular culture that a music video depicting women in the way that “Blurred Lines” does can in any way be described as “feminist.” Which is why, when I heard recently that there was a “feminist parody” of “Blurred Lines,” I was curious to check out what themes would be drawn out from the original.

“Defined Lines,” created by a group of law students at the University of Auckland, was described by The Independent as “featur[ing] three fully dressed women responding to the attentions of scantily clad men as they sing about sexism.” After watching the video, it was evident to me that the women took issue with the lyrics in “Blurred Lines” (as new lyrics were provided) as well as with how the female body was objectified in the original (they substituted nearly naked men to make this point). Interestingly, the video offers conventionally attractive men in its effort to “objectify” them (perhaps to parallel the conventionally attractive women in “Blurred Lines”). Like so many contemporary depictions of female empowerment, though, “Defined Lines” reinforces visual codes of “acceptable” bodies in media messages. In so doing, it does not make an obvious statement about the ways in which the appearance of the women in “Blurred Lines” denotes standards of beauty that are so closely linked with the objectification of women.

Clearly, the parody’s creators wanted to “flip the script” by portraying a gender reversal of the “Blurred Lines” video. However, representations of men in (almost) the buff simply do not convey the same cultural meanings as women without clothing, as each gender’s socially, politically, and economically situated role is different. And, since beauty norms play such an important role in how women feel about their bodies and themselves, taking this issue on could have contributed to a larger conversation about the objectification of women and sexism. Instead, female “empowerment” is presented through lyrics that combat sexism in ways that pit women against men, as well as by showing women walking men on leashes or placing their stilettos on the men’s backs as the men do push-ups.

I applaud the creators of “Defined Lines” for taking “Blurred Lines” to task. Since I am writing this piece, perhaps both of these videos can be considered “art,” in that they have worked to generate conversation about media depictions of gender and messages of popular feminism. But, “objectifying” men does not help to unravel the knot between meanings of female beauty, objectification, and sexism in media messages. 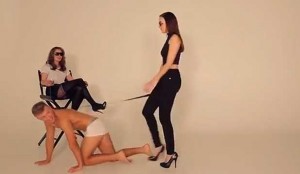 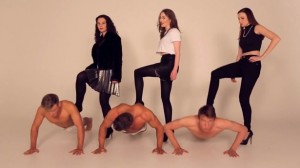 Can you please write a piece considering the differences/similarities between the existence/reception of the videos for "Blurred Lines" and "Wrecking Ball" (Miley Cyrus, released this week)?