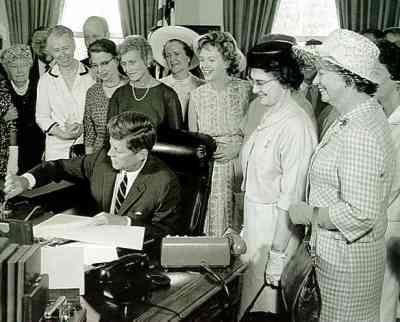 The Equal Pay Act turns 50 on Monday, June 10, 2013 and the Council on Contemporary Families has convened an online symposium representing the latest thinking from pre-eminent work-family scholars, business people, and advocates for low-wage workers and unions.

In one of the ten briefs, CUNY’s Ruth Milkman reports how labor unions—and women in them—spearheaded the campaign for the Equal Pay Act, even though they made up only 18.3 percent of members at the time. If unions had had their way the language would not have been “equal pay for equal work” but “equal wage rates for work of comparable character on jobs the performance of which requires comparable skills.” Milkman explains, this was “wording that would have forced employers to pay women in traditionally sex-segregated jobs as much as men with comparable skills in traditionally male occupations…. Given the pervasiveness of job segregation by gender, this weakened requirement for equity ensured that the law had a far more limited impact.”

How are women in unions doing? Today, women make up 45 percent of all union members, but union membership rates have declined: In 1960 one in four workers was in a union; today, that is down to about one in ten, reports Milkman. The historic decline hit private sector unions, where male unions used to be strong, first and hardest, says Milkman. But “starting in 2011, a wave of state-level legislation weakening collective bargaining rights for public sector workers has directly targeted teachers and other unionized female-dominated occupations.”  This attack is a real problem since women union workers earn an average of more than $5 an hour more than nonunion ones and have more benefits and job security as well—and nonunion workers in unionized fields benefit from this advantage.

As a public sector worker–a professor at a state university–and a proud union member, I say thanks labor movement!

For other NICE WORK posts on women in unions, read unions matter to women, waiting for superwoman, and woman’s nation = workers’ nation.

Nice work indeed. Thanks, labor unions - and thanks Virginia.

And omg I love that photo!

Thanks for a great article. I second your closing sentence! I remember my first introduction to the American Labor movement as a foreign graduate student -- a friend I was visiting in Chicago took me on a whirlwind late-night tour of places where the movement had made history.
I wonder if there's hope for the ERA.