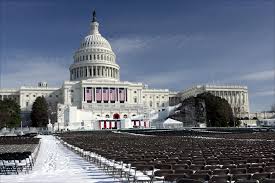 Taking off our inaugural ball gowns (woo-hoo Obama!) and picking up our pens, this weekâ€™s Global Exchange will take a look at religious faith and feminism.

The inauguration is a good place to start for an examination of religion, since we donâ€™t have to tell you that our pal religion â€“ and the controversy surrounding it â€“ was on full display during the festivities. President Obamaâ€™s selection of Pastor Rick Warren to conduct the inaugural invocation set off a firestorm of protest from the left, and particularly gay-rights and womenâ€™s rights organizations, for his recent support of the gay marriage ban in California (as well as previous positions on divorce and abortion, among other issues).

On the progressive side, Bishop Gene Robinson, the “first openly gay, non-celibate priest to be ordained a bishop in a major Christian denomination,â€ and enemy of the religious right, was chosen to give the opening prayer at the We Are One concert held on Sunday at the Lincoln Memorial (the controversy continued when HBO decided not to include Bishop Robinsonâ€™s prayer in their official coverage of the event).Â  Reverend Sharon Watkins was selected by the President to be the first woman to lead the national prayer service on the day after the inauguration.Â  And who can forget the Reverend Joseph E. Loweryâ€™s inaugural benediction?Â  For our purposes, this obsession with, and prevalence of, religion during the inauguration provides a perfect inroad to explore the historically complex relationship between womenâ€™s rights and religion.

Traditionally, womenâ€™s rights and many aspects of organized religions have had a strained relationship.Â  However, women have not been the â€œpassive followersâ€ that some interpretations of religions would have them be, and in fact, women play an important role in many religious traditions (think Virgin Mary, Esther, Aâ€™isha).Â  Today, through actions such as taking a stand against religious fundamentalisms, criticizing Pastor Rick Warrenâ€™s position on domestic violence and divorce, and coming together across faiths to denounce the violence in Israel and Gaza, women continue to ensure that their voices â€“ voices for peace, justice, and equality â€“ are an essential part of religious and political values.

The list of womenâ€™s grievances in terms of inequitable treatment in organized religious practices is long, and varies according to religious tradition, culture, state policy, and community structures, among other factors.Â  But letâ€™s take, for example, the issue of womenâ€™s leadership roles.Â  Of the worldâ€™s leading religions, Catholicism and Islam still hesitate to allow women leaders (although there is discussion among Muslims on the parameters for female imams).Â  Yet, in spite of the lack of space for womenâ€™s leadership in some religions, research has linked economic development to religious belief.Â  For example, recent research has found that a key stimulant to economic growth is the belief in hell.Â  Not as surprisingly (at least to us) womenâ€™s human rights are also key to economic growth.

One has to hope, then, that the incarnation of religion for the majority of people (according to a 2005 Cambridge University survey 88% of people worldwide believe in a God of some type ) around the globe is based on progressive ideals of equality and social justice.Â Â  International Agencies recognize that key faith/religion stakeholders need to be involved in economic development planning. The question is how has the religion/development debate expanded to include womenâ€™s rights and gender equality?

In 1998 the former World Bank head James Wolfenson and the then Archbishop of Canterbury Carey formed the World Faiths Development Dialogue (WFDD).Â  The current head is Katherine Marshall and our findings shows that, while sparse, gender has been addressed in their research and at their conferences.Â  The WFDD marks a growing trend, as more and more faith organizations contribute to international development and peace initiatives.Â  Gender needs to share the spotlight with religion and faith on the international development stage – it is imperative to truly equitable growth.Â  Womenâ€™s organizations globally recognize this, its time for International Organizations to do the same. (We wonder, of course, why the organizations that have the most resources are always a few steps behind? â€¦ but the historical gender bias inherent in these organizations is a story for another day!)

The United Nations Development Fund for Women (UNIFEM) has in many ways â€œmainstreamedâ€ religion, paying attention to how it affects all aspects of womenâ€™s lives.Â  Outside of UNIFEMâ€™s good work, NGOs globally have taken the lead in addressing gender, religion, and development.Â  The international womenâ€™s organization AWID has a key initiative focused on â€œResisting and Challenging Religious Fundamentalisms.â€ Their recent report, titled Ten Myths about Religious Fundamentalisms, is a collaborative effort by activists globally that find many similarities in the (often negative) effects of fundamentalistsâ€™ teachings on women, and encourages readers to hold fundamentalists accountable for their words and actions.

For its own part, the womenâ€™s movement in the United States (which prides itself on a tradition of separation of church and state, however rhetorical) has had a historically strained relationship with organized religions.Â Â  Eleanor Smeal, president of the Feminist Majority Foundation, notes that the disagreement within feminist movements in this country dates as far back as the first suffragist movement in the 1840s. Smeal recounts the fact that

Elizabeth Cady Stanton believed that the feminist movement should take [religion] on forthrightly–that it should be dealt with–that you could not ignore this institution that was teaching woman’s subjugation. In fact, she spent a great deal of her life writing a women’s bible, and Susan B. Anthony felt that this was too much–that feminists had taken on so many opponents that they didn’t need one more opponent.

Stantonâ€™s work to reconcile womenâ€™s rights and faith is reminiscent of todayâ€™s work by organizations such as Helen LaKelly Huntsâ€™ Sister Fund, which aims to â€œchallenge society’s perverted applications of scripture that would exclude or demean women.â€Â  Organizations such as JOFA (the Jewish Orthodox Feminist Alliance) and Women Living Under Muslim Laws work towards similar goals by developing gender-sensitive curriculum for religious schools and reinterpreting religious texts and laws to be more gender equitable.Â  The Sister Fund supports many of these types of initiatives, and also runs a Faith and Feminism website (together with Faith in Public Life and the Women, Faith and Development Alliance) which seeks to open a dialogue between secular feminists and feminists of faith who are working towards social justice goals.

DC-based policy organization IWPR is also committed to opening such a dialogue.Â  IWPRâ€™s Politics, Religion, and Womenâ€™s Public Vision research and outreach program is â€œcommitted to promoting a vision for U.S. policies and practice rooted in womenâ€™s public vision and values.â€ Through research, the program has found that religious women activists are deeply committed to a set of moral values that must be brought into public discussions on religion, morality and politics and, importantly, into the womenâ€™s movement itself.Â  IWPR drafted a Womenâ€™s Vision and Values for Public Life out of the programâ€™s research findings, and the Vision is worth taking a look at in full (they even have a comments section).Â  And because we are such fans of their vision of equality and individual worth, balanced power, family and community (and because there were certainly echoes of all of these values in President Obamaâ€™s inaugural address), we are going to close this monthsâ€™ Global Exchange with the opening of that Vision:

Womenâ€™s full integration into public life is essential to building a truly democratic society, creating a more caring culture, and improving the lives of women, their families, and all communities. We call on leaders in politics, the economy, society, and religion to promote practices that empower women of all backgrounds and advance their equality and well-being in public and family life. We call for policies that embody the values of caring and consideration for humanity and support practices that encourage cooperative models of public life.

[...] the heels of Gwen and Tonni’s awesomely informative post-inaugural post on religion, I’m thrilled to bring you this Q&A by GWP reader-now-contributor Allison McCarthy, a [...]

[...] should also read Gwen and Tonni’s awesome GWP post about feminism and faith from this [...]