Joan Acker and the Shift from Patriarchy to Gender

We’ve read some of the tributes to the feminist sociological genius of Joan Acker.  And much of that work has celebrated one specific application of her work.  For instance, Tristan posted last week on Acker’s most cited article—“Hierarchies, Jobs, Bodies: A Theory of Gendered Organizations” (1990)—which examined the ways that gender is so embedded in the structure of organizations that we often fail to appreciate just how much it shapes our lives, experiences, and opportunities.  But, this specific piece of her scholarship was actually her applied work. It was an application of a theoretical turn she was suggesting all sociologists of gender follow.  And we did.  Acker was involved in an incredibly important theoretical debate that helped shape the feminist sociology we practice today.

“Patriarchy” is a concept that is less used today in feminist social science than it was in the late-1970s and 1980s.  The term has a slippery and imprecise feel, but this wasn’t always the case. There were incredibly nuanced debates about patriarchy as a social structure or as one part of “dual systems” (capitalism + patriarchy) and exactly what this meant and involved theoretically. Today, we examine “gender.”  Indeed, the chief sociological publication is entitled Gender & Society, not Patriarchy & Society.

But in the 1970s and 1980s, patriarchy was employed theoretically much more often.  Feminist scholars identified patriarchy to focus the critique of existing theoretical work that offered problematic explanations of the subordination of women.  As Acker put it in “The Problem with Patriarchy,” a short article published in Sociology in 1989: “Existing theory attributed women’s domination by men either to nature or social necessity rather than to social structural processes, unequal power, or exploitation” (1989a: 235). The concept of patriarchy offered a focus for this critique.

Joan Acker was among a group of scholars concerned about the limitations of this focus; in particular, patriarchy was criticized for being a universal, trans-historical, and trans-cultural phenomenon—“women were everywhere oppressed by men in more or less the same ways” (1989a: 235).  Concluding that patriarchy could not be turned into a generally useful analytical concept, Acker proposed that feminist social science move in a different direction—a route that was eventually largely accepted and taken up.  It’s no exaggeration to suggest that Acker was among a small group of feminist scholars who shifted the conversation in an entire field.  We’ve been relying on their suggestion ever since. 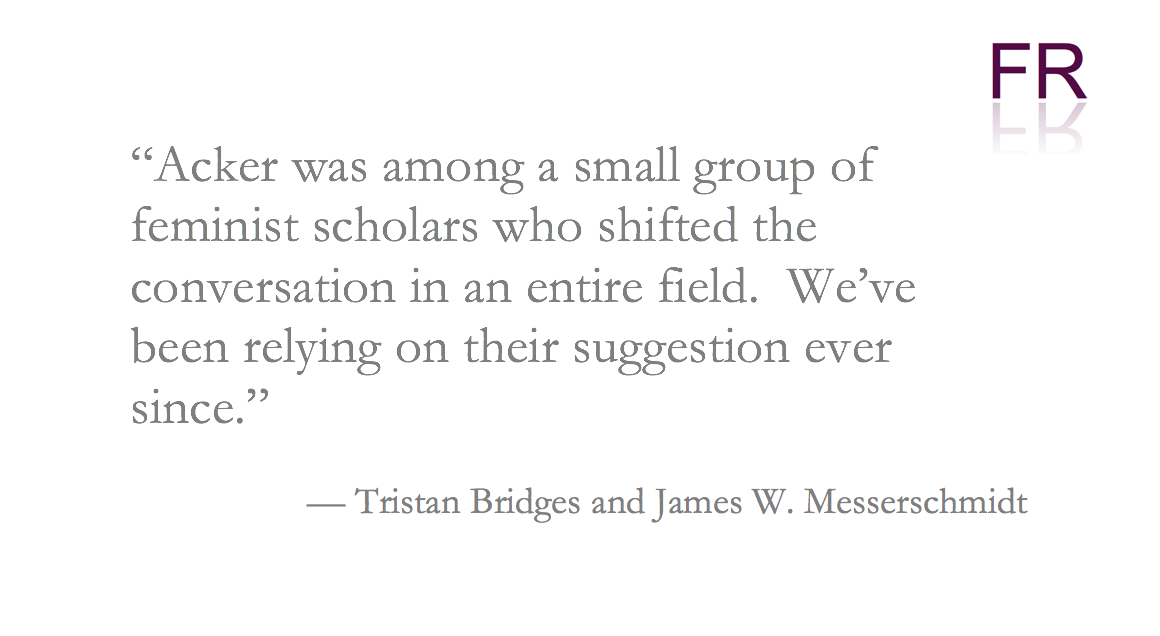 Acker’s short 6-page article was published in the same journal that had published Raewyn Connell’s article, “Theorizing Gender” (1985), which spelled out her initial delineation of the problems with sex role theory and what she labeled “categoricalism.” Connell was also concerned with how feminist theories of patriarchy failed to differentiate among the categories of “women” and “men”—that is, femininities and masculinities. Judith Stacey and Barrie Thorne’s “The Missing Feminist Revolution in Sociology” (in Social Problems) was published that year as well (1985), specifically criticizing sociology for solely including gender as a variable but not as a theoretical construct. Acker (1989a) explained why feminist social scientists ought to follow this trend and shift their focus from patriarchy to gender relations and the construction of gender in social life.  As Acker wrote, “From asking about how the subordination of women is produced, maintained, and changed we move to questions about how gender is involved in processes and structures that previously have been conceived as having nothing to do with gender” (1989a: 238).  And in another piece published in the same year—“Making Gender Visible” (1989b) in the anthology, Feminism and Sociological Theory—Acker argued for a paradigm shift that would place gender more centrally in understanding social relations as a whole. Acker suggested a feminist theoretical framework that was able to conceptualize how all social relations are gendered—how “gender shapes and is implicated in all kinds of social phenomena” (1989b: 77). Today, this might read as a subtle shift.  But it was monumental when Acker proposed it and it helped open the door too much of what we recognize as feminist sociology today.

Acker published what became her most well-known article—“Hierarchies, Jobs, Bodies”—in Gender & Society (1990) as an illustration of what the type of work she was proposing would look like.  She was concerned with attempts that simply tacked patriarchy onto existing theories which had been casually treated as though they were gender-neutral.  She explained in detail how this assumption is problematic and limits our ability to understand “how deeply patriarchal modes are embedded in our theorizing” (1989: 239).  And Acker illustrated this potential in her theorizing about gender in organizations.  But her suggestion went far beyond organizational life.

And by all measures, we took up Acker’s suggestion:  “Gender,” “gender relations,” and “gender inequality” are now the central foci of sociological theory and research on gender.  But Acker also concluded her short 1989 article with a warning.  She wrote,

[T]here is a danger in abandoning the project of patriarchy.  In the move to gender, the connections between urgent political issues and theoretical analysis, which made the development of feminist thought possible, may be weakened.  Gender lacks the critical-political sharpness of patriarchy and may be more easily assimilated and coopted than patriarchy. (1989a: 239-240)

Certainly, Acker’s concern leads us to honestly ask: Will shifting the theoretical conversation from patriarchy to gender eventually result in simply a cursory consideration of gendered structured inequality? Will the shift to gender actually loosen our connections with conceptualizations of gendered power? We don’t think so but one way to commemorate the legacy of Joan Acker is to both celebrate gender diversity while simultaneously visualizing and practicing gender equality.  This means continuing to recognize that inequality is perpetuated by the very organization of society, the structure of social institutions, and the historical contexts which give rise to each.