The Objectivity Myth in Research

When I returned to New Orleans in the wake of Hurricane Katrina, I was acutely aware that I was a woman. Families were slow to return and the influx of military and construction workers rebuilding the city and its infrastructure meant that women were severely outnumbered by men. Street lamps were inoperable and police were over extended. Gendered violence was up (see here, here, and here). When I rang in the New Year down in the French Quarter, camo clad military police in Humvees and carrying open automatics patrolled the street—but they did not make me feel safe.

As a sociologist and gender scholar, these experiences made me think more about women in post-disaster spaces. During the ten years since Hurricane Katrina, I have been immersed in the study of gender in the men’s grooming industry. But my new biography shaped my sociological imagination and spurred my now second vein of research. I have explored why it is gender analysis comes second to race and class analyses in disaster work and traced the movement of women as they evacuated and relocated or returned to New Orleans. I am currently working with colleagues at the Centre for Community Disaster Research on analyzing data of single-mothers during the Southern Alberta Flood. Biography, the lived experience, informs scholars’ research trajectories and data, and this is certainly the case with my disaster work. 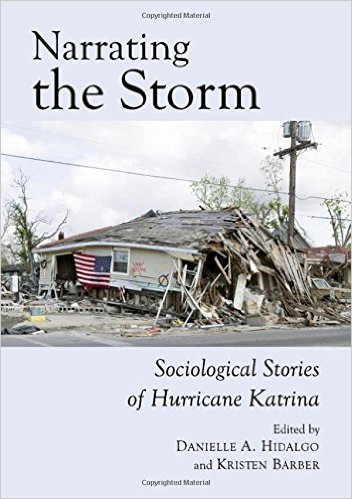 Sociology is a science, as it is a rigorous and methodical empirical process. Perhaps it is in defense of this that sociologists have a history of prioritizing objectivity as the “gold standard” of research. In the 1980s, though, feminist scholars began a critical conversation about the myth of objectivity, or what Donna Haraway refers to as the “god trick.” The notion that researchers are unattached from their work is only smoke and mirrors and has often silenced already marginalized people. By writing themselves out of their work, many researchers help to veil the fact that very few—privileged white men—were and are speaking for many. It is no coincidence that gender studies grew only as women entered academics, and that scholars of color lead the fight for university race and ethnic studies departments. Diversity of voice, that is the diversity of lived experiences, is key to creating a diverse sociology—or any field for that matter. We need to know who is speaking and move past the dangerous idea that white men represent unbiased authorities—those same authorities whose supposedly objective science led to conclusions like women have smaller brains and thus an inferior intellect than men.

In the classroom I constantly tackle the entrenched god trick in the sciences when students express discomfort or confusion around my requests to write themselves into their papers. “Use the ‘I’,” I say. “Don’t pretend that you don’t exist,“ I tell them. “Why is it that you are interested in this topic? How does being you impact your entrée into your field site? The questions you ask? The data you get? The analysis you do?” In other words, don’t continue the androcentric legacy that the scholar-author should be and can be a disembodied authority and that subjectivity hinders “real” science.

In our article, The Experiential Gap in Disaster Research, my co-author, Tim Haney, and I discuss how the god trick continues to shape sociological work. We argue what is now taken for granted by many gender scholars as obvious but has not yet seriously shaped all fields of sociology: standpoint matters. We should acknowledge and have honest discussions about how researchers’ closeness to or distance from a topic, including disaster, shapes what we know about a phenomenon. In terms of environmental disasters, valuable lessons go missing if we define closeness as bias and bias as bad science.

We sampled and compared work in a modest number of qualitative articles written by researchers who were affected by Hurricane Katrina and others that weren’t. Both did great work, asked important questions, and presented important results. There were a couple of key distinctions, though:

Right now, larger discussions on the epistemic importance of experiential based research is ghettoized in already reflexive-friendly subfields, like gender and ethnic studies. And this is a problem because social scientists in all fields have accepted a significant degree of influence over policy and in litigation cases as experts. That is, we may indeed encounter moments when we can influence the material realities of other people; and so we have a responsibility to be honest about how this influence is unequally distributed among scholars and may continue the colonization of marginalized groups struggling against allegations of bias to be considered experts on their own lived experiences and community needs.

[…] The Objectivity Myth in Research from Feminist Reflections […]