In my introduction to Sociology class, I use trends in baby names to introduce students to sociological research and inquiry. It’s a fun way to show students just how much we can learn from what might feel like idiosyncratic details of our lives. I start by showing students the top 10 boy and girl names from the most recent year of data available (along with their relative frequencies). After this, I show them the most popular names and their relative frequencies from 100 years earlier. There are some names on both lists; but for the most part, the names on the latter list sound “old” to students.

When I ask students to characterize the types of names they see on the older list of names, someone usually says the names sound more “traditional.” I tell them that in 100 years, someone will probably say that about the most recent list of names they’re looking at: these future students will have a different idea of what makes a name “traditional.”

If you’re interested, someone produced these two GIF files that depict the most popular names by state between 1960 and 2012. I like to show one of these while I’m talking with students about what what names can help us learn. I ask students to raise their hand when they see their own name or the name of their best friend. As we get into the 80’s and 90’s, lots of hands start going up. But the GIFs are also interesting because they are a powerful visualization of the spread of cultural norms. Popular names move through a population in a way that appears to be similar to infectious diseases.

This is a fun way to show students that deciding what to name a child might feel like a personal decision, it’s actually a decision that is shaped by social forces. Names and name trends are great examples of what sociology can reveal because, as Stanley Lieberson points out so simply, while taste in most elements of culture is not a requirement, everyone has tastes in names. And, as it turns out, we can learn a lot about a society just by looking at patterns in which names we select for our children (and equally important are the types of names different groups tend to avoid).

SIDENOTE: I like to highlight a great finding by Stanley Lieberson, Susan Dumais, and Shyon Baumann from their article on trends in androgynous names (here). Androgynous names are names that are given to both boys and girls–think Taylor, Cameron, or Casey for current examples. Lieberson, Dumais, and Baumann found that androgynous names follow an incredibly common pattern once they achieve a critical level of popularity: they become girl names and become dramatically less common names for boys–a powerful example of the stigma associated with femininity for boys.

When I first started using the exercise, I was fascinated with the relative frequencies much more than the names on each list. But it’s an amazing shift. More than 1 in 20 girls born in 1914 was named Mary (the most popular name that year – and many other years too if you’re interested). By 2014, just over 1 in 100 girls born were given the most popular name that year, “Emma.” This is part of a larger trend in naming practices–popular names just aren’t as popular as they used to be. Stanley Lieberson refers to this as the “modernization theory” of name trends. The theory suggests that as institutional pressures associated with names decline (e.g., extended family rituals, religious rules), we see the proliferation of more diverse names. But there’s a twist. The phenomenon is also gendered: popular boy names have always been more popular (in aggregate) that popular girl names. Below, I’ve charted the proportion of boys and girls born in the U.S. with top 10 names from 1880-2014. Boys given top ten names in 1880, for instance, accounted for more than 40% of all boys born. And the most popular boy names have always accounted for a larger share of all boys born than the most popular girl names for girls born. It’s not a new fact and I’m not the first to notice it. (Though, as you can see below, the lines have just recently met, and they could conceivably cross paths any year now. And that will be something that has never happened.) 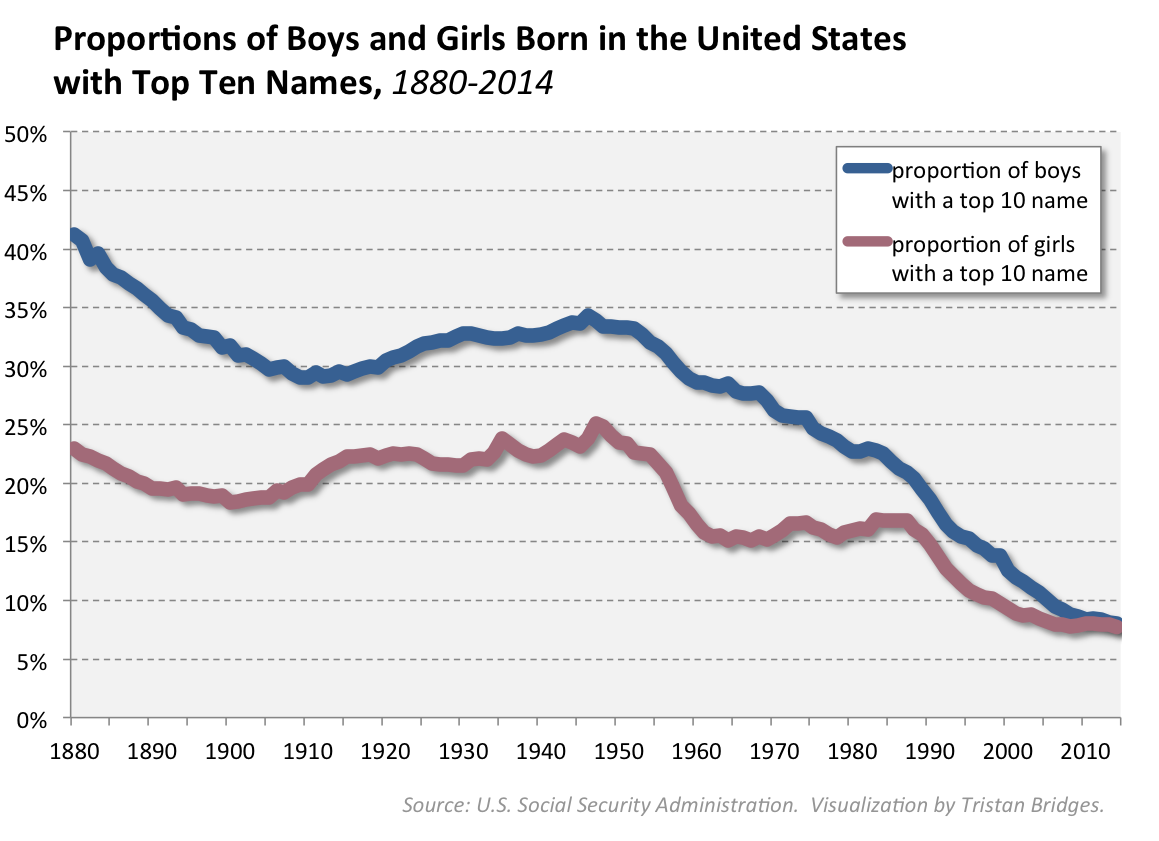 In 1965, Alice Rossi suggested that part of what accounts for the discrepancy is related to gender inequality. As she put it, “Men are the symbolic carriers of the temporal continuity of the family” (here). Lieberson and Eleanor Bell later discovered that girls are more likely to have unique names as well (here). It’s an interesting example of something that many people teach in courses on men and masculinities. While men are, as a group, systematically advantaged, they may be held accountable to a more narrow range of gender performances than are women. And while men’s rights groups might frame this as an illustration of women being the group to benefit from gender inequality, it’s much better understood as what Michael Messner refers to as a “cost of privilege.”

Yet, this appears to be one costs of privilege that has decreased. In 1880, the top 10 boy names accounted for 41.26% of all boys born that year; the top 10 girl names accounted for 22.98%. There was more than an 18% gap. While boys’ popular names are still more popular than girls’ popular names, the gap shrunk to 0.27% by 2014. That’s a monumental shift. And I’m sure the modernization theory of name trends accounts for the lion’s share of the more general shift toward more secular names and a general decrease in name continuity between fathers and sons. But there is more than one way to read this shift. We might also say that this is a really simple illustration of one way that patriarchal family traditions have been chipped away over the past 100 years. Lots of data would support this conclusion.  We might account for it alongside, for instance, data showing the prevalence of women taking men’s surnames after marriage as a percentage of all marriages in a given year or opinions about surname change.  But it’s also an illustration of the ways that this process has meant changes for boys and men as well.

Masculinity has, quite literally, opened up. It’s something that has happened more for some racial and class groups than others. And whether this transformation–this “opening up”–is a sign of gender inequality being successfully challenged or reproduced in new and less easily recognizable ways is the subject of my favorite corner of the field.

This is a great piece, and great ideas for teaching. Thanks! I have always thought that Lieberson piece is such a good example of what I call the devaluation of the feminine.

I am wondering if the relative popularity of names is a good indicator to reflect the trends you mentioned. (I don't mean it isn't good, but there are factors that affect the numbers and need to be considered.)

immigrants:
It leads to diversity in names as immigration is much much more common than it did in the past.

If they take up a large number in the population, then the relative frequency of the popular names should also be lower.

It should also be noted that immigrants do not always increase name diversity. When they try to integrate into the society, they'll take up some local names.

The cultural background of the immigrants should also be considered: whether the two genders are equal.

And based on the modernization theory mentioned, different generations of the immigrants may also name their children differently, depending on how much their cultures deviates from the US culture and how much they accept it.

Disclaimer:I point out immigrants as a point of discussion because and only because immigration was less common/in a much smaller scale in 1880-1960s (I am not sure about the timeline) I am not making linkages between the cultural backgrounds of immigrants and the subtopics of gender under discussion.

[…] Cross-posted with permission from Feminist Reflections. […]