This is my sixth post for Feminist Reflections, and I am starting to settle into my new role as a (more) public sociologist. Since I started blogging, my work has been reposted on other academic blogs, popped-up on Tumblr, and made it to Sociological Images’ top posts of 2015. It is exciting to see my ideas weave their way through the online world. It makes me feel less armchair-y, and it allows me to write in ways that break the academic mold.

But I wasn’t prepared for the backlash of putting sociological analyses of different phenomenon out into the public world. In the classroom, I occupy a status of authority, and I suppose that I figured as an expert in sociology and gender studies, people who read my posts would consider what I had to say. This is, after all, the courtesy I am afforded in the classroom. What I have found, though, is that blogging means making myself vulnerable in new ways; it means deciding to engage or avoid people who vehemently (to put it mildly) reject my online work; and it means thinking more about what exactly can be accomplished by blogging.

By definition, sociologists study and engage public issues. They are trained to analyze the mechanisms by which social ideologies, interactions, and structures shape everything from fashion choices to the global political economy; and so this work is often political in nature and strikes many as judgmental of their own behavior. To some, sociologists seem to make Halloween costumes and the comeback of plaid and beards for men unnecessarily political. From a sociological perspective, though, this work reveals the already existing but often taken-for-granted inequalities of everyday life.

It’s interesting to see what work gets the most public backlash. Of my own blogs, Man Buns as Cultural Appropriation was widely “liked” and much despised. Perhaps I could have been clearer that I was not saying white men who gather their hair behind their ears should feel racial guilt; but I stand by my argument that the bun does not transform all men into hipsters. Some men are negatively targeted because of the racial, ethnic, or religious associations of their buns. And when style sites encourage men attempting the bun to “Think more Indian Sikh than Kardashian at the gym” or to mimic the Samurai top knot, they help us understand that the man bun is about more than just style.

Other scholars who ask us to consider white, male, and/or heterosexual privilege also see a lot of backlash; and some have received hate mail calling them whores and death threats on social media. And some academics are getting into trouble with their universities for making public not only their personal opinions, but their interpretations of phenomenon in ways that are actually congruent with their training; be it political science, sociology, queer studies, or any number of fields. 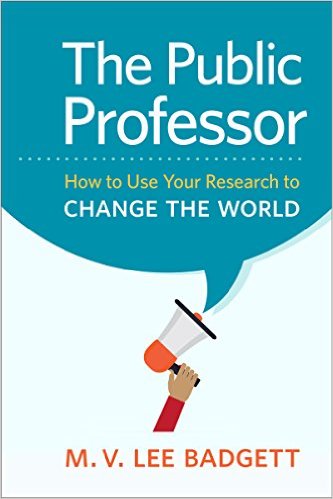 M. V. Lee Badgett’s new book, The Public Professor: How to Use Your Research to Change the World, unpacks strategies for going public with academic research and encourages scholars to consider the practical effects of these different strategies. Citing academic bloggers John Sides and Lisa Wade, for example, she lays out valuable outcomes of blogging, including: providing content for courses, becoming a public expert and generalist in a field, and helping to encourage “appreciative thinking” outside the classroom. They also note that blogging can be fun! The title of the book is thus a bit of a misnomer, as Badgett encourages scholars to go public but keep their expectations in check. You might not change the world with one post or even one hundred posts. Nonetheless, you just might find yourself feeling empowered to engage new audiences outside of your classroom, discovering new communities of colleagues, and learning how to respond to challenges to your work you never received from academic colleagues. I’m still navigating what “going public” means for me, but I’m interested to see where this digital road leads.

I enjoyed reading this.