What Constitutes a Mass Shooting and Why You Should Care

How many mass shootings occurred in the United States in 2015? It seems like a relatively simple question; it sounds like just a matter of counting them. Yet, it is challenging to answer for two separate reasons: one is related to how we define mass shootings and the other to reliable sources of data on mass shootings.  And neither of these challenges have easy solutions. 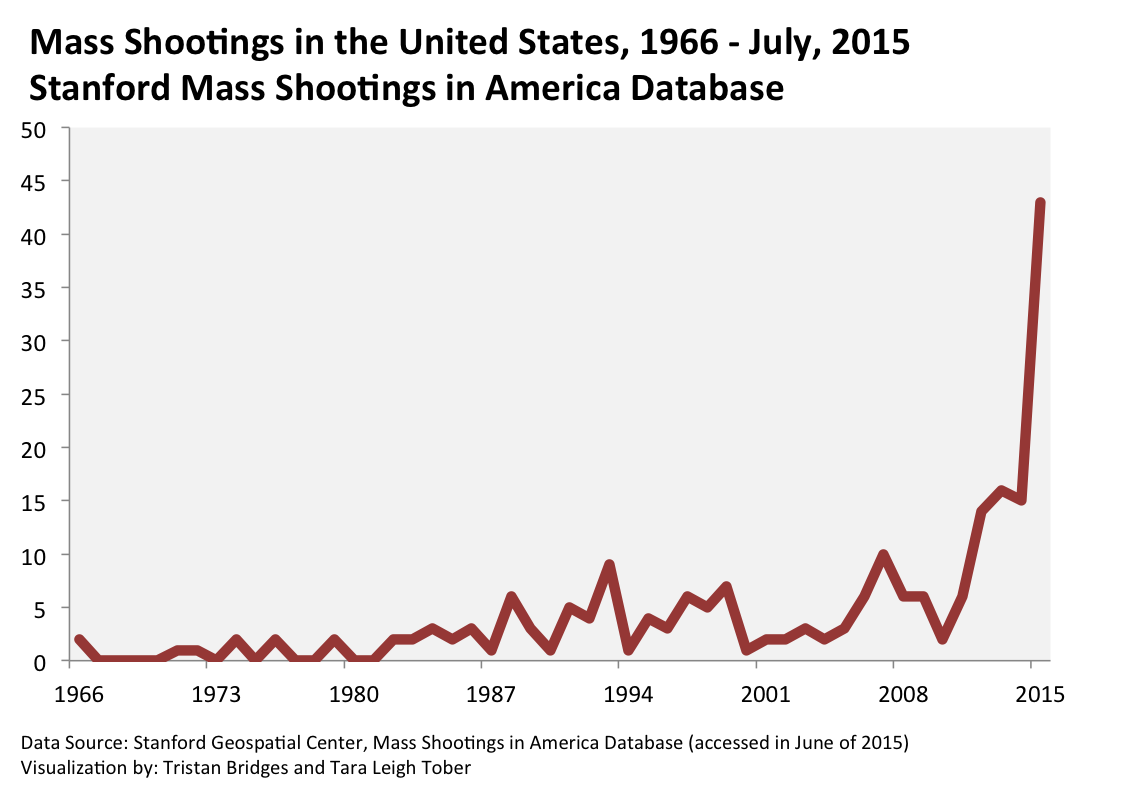 For a detailed day-by-day visualization of the mass shootings collected in the ShootingTracker.com dataset between 2013 and 2015, see below (click each graph to enlarge). 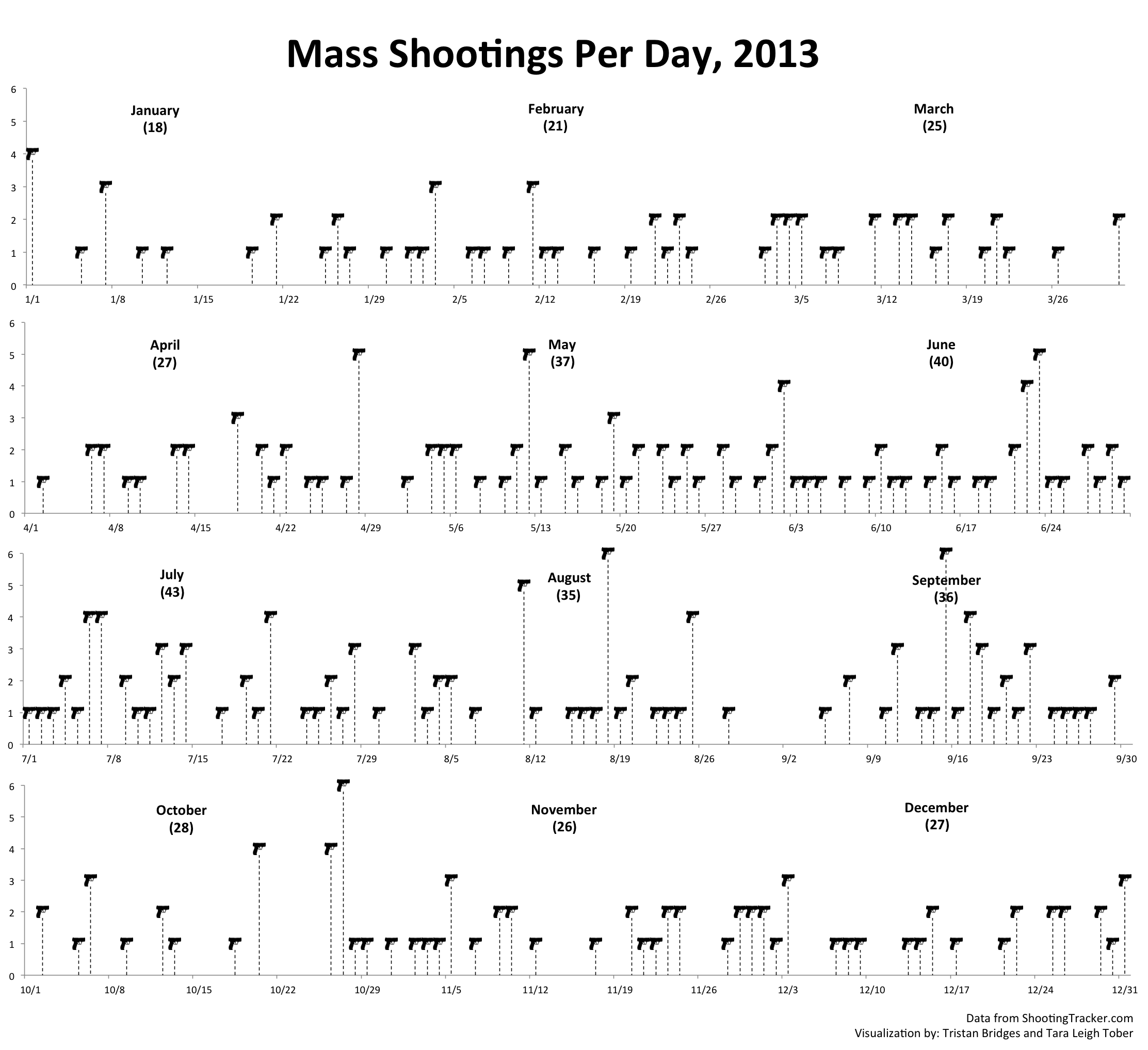 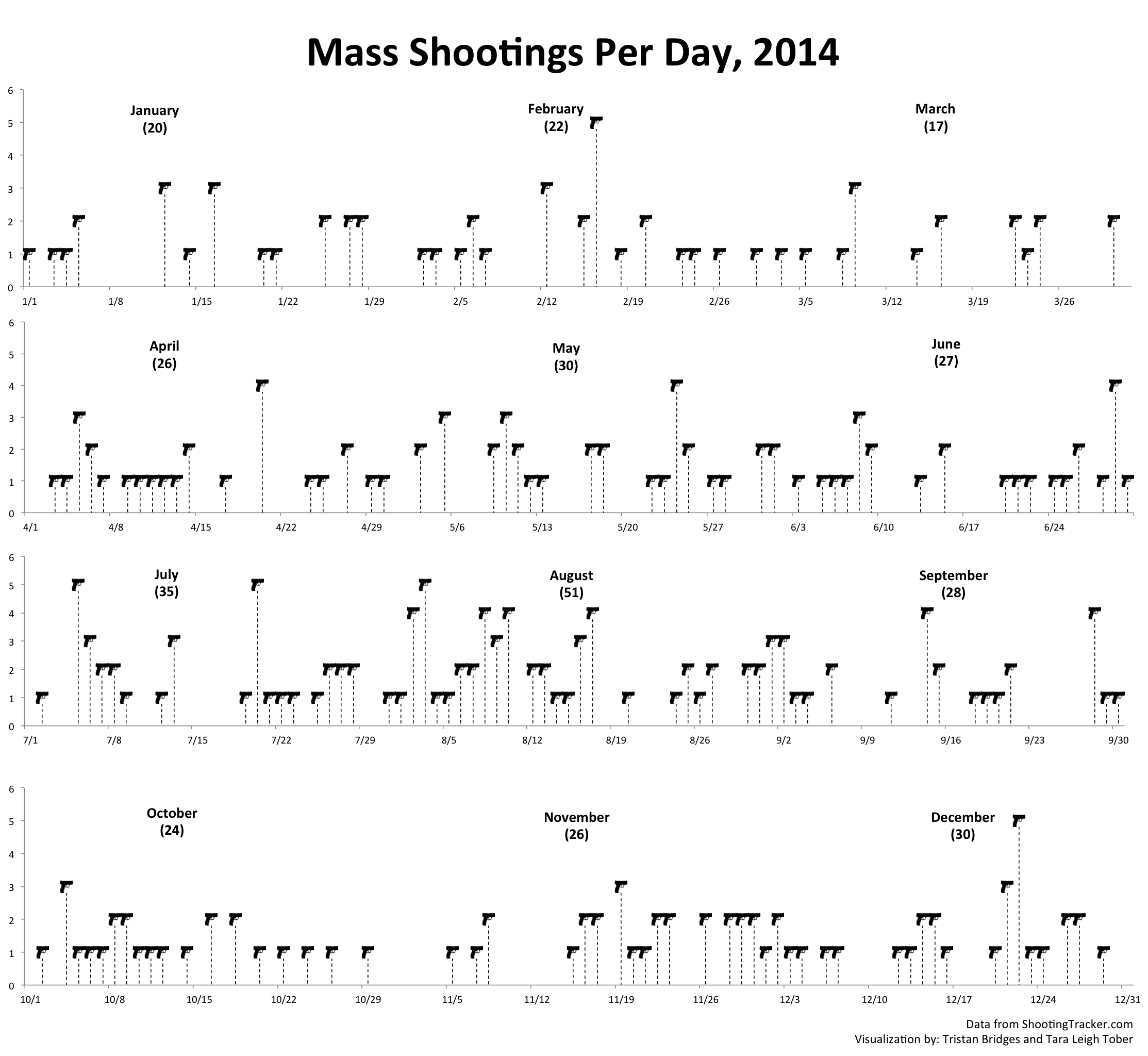 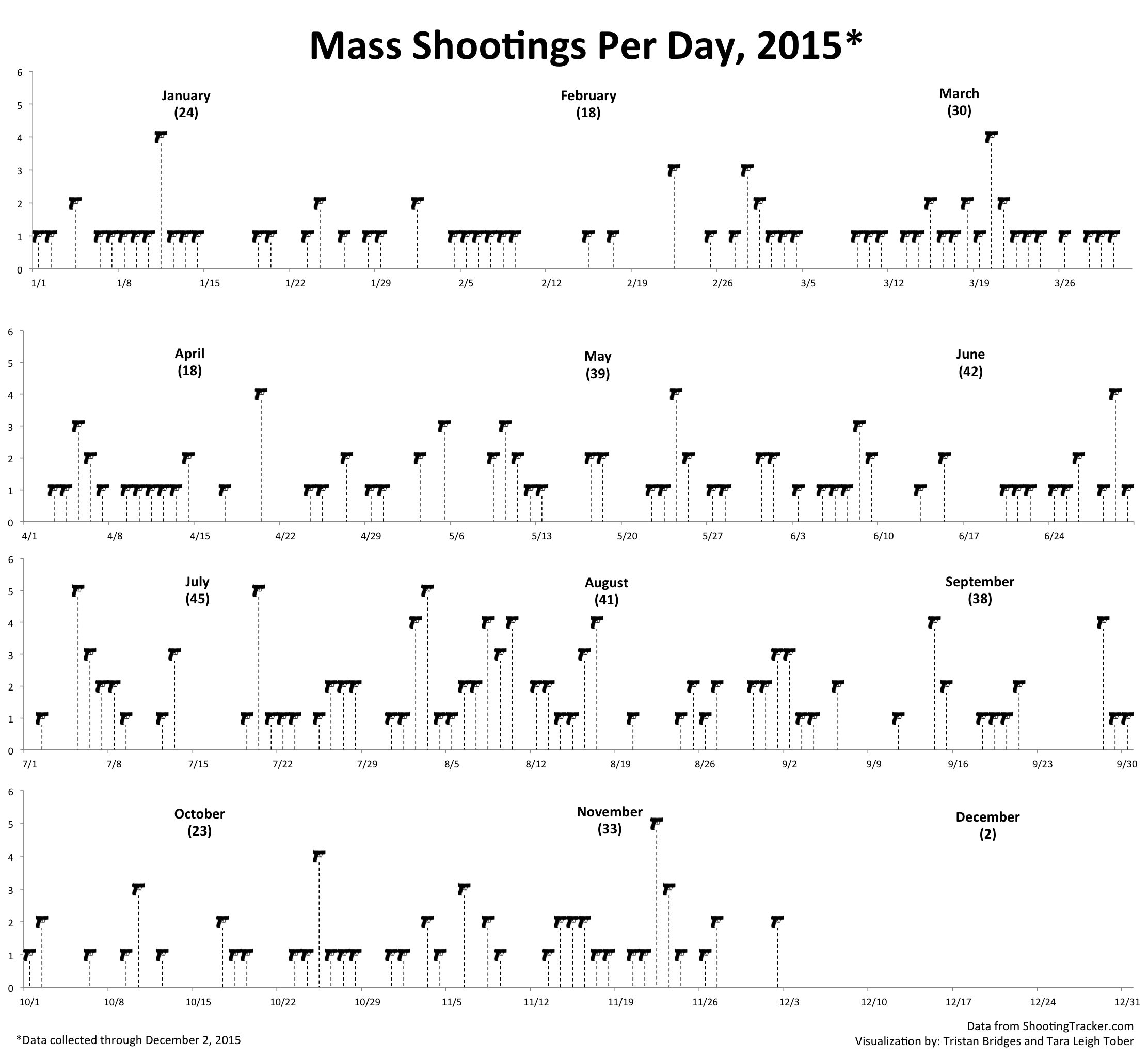 The reason for this discrepancy has to do with definition in addition to data collection.  The dataset produced by the Stanford Geospatial Center is not necessarily exhaustive.  But they also rely on different definitions to decide what qualifies as a “mass shooting” in the first place.

The Stanford Geospatial Center’s Mass Shootings in America database defines mass shootings as shooting incidents that are not identifiably gang- or drug-related with 3 or more shooting victims (not necessarily fatalities) not including the shooter.  The dramatic spike apparent in this dataset in 2015 is likely exaggerated due to online media and increased reporting on mass shootings in recent years.  ShootingTracker.com claims to ensure a more exhaustive sample (if over a shorter period of time).  These data include any incidents in which four or more people are shot and/or killed at the same general time and location.  Thus, some data do not include drug and gang related shootings or cases of domestic violence, while others do.  What is important to note is that neither dataset requires that a certain number of people is actually killed.  And this differs in important ways from how the FBI has counted these events.

Neither ShootingTracker.com nor the Stanford Geospatial Center dataset rely on the definition of mass shootings used by the Federal Bureau of Investigation’s Supplementary Homicide Reporting (SHR) program which tracks the number of mass shooting incidents involving at least four fatalities (not including the shooter). The table below indicates how different types of gun-related homicides are labeled by the FBI.

Often, the media report on events that involve a lot of shooting, but fail to qualify as “mass murders” or “spree killings” by the FBI’s definition.  Some scholarship has suggested that we stick with the objective definition supplied by the Federal Bureau of Investigation.  And when we do that, whether mass shootings are on the rise or not becomes less easy to say.  Some scholars suggest that they are not on the rise, while others suggest that they are.  And both of these perspectives, in addition to others, influence the media.

One way of looking at this issue is asking, “Who’s right?”  Which of these various ways of measuring mass shootings, in other words, is the most accurate?  This is, we think, the wrong question to be asking.  What is more likely true is that we’ll gather different kinds of information with different definitions – and that is an important realization, and one that ought to be taken more seriously.  For instance, does the racial and ethnic breakdown of shooters look similar or different with different definitions?  No matter which definition you use, men between the ages of 20 and 40 are almost the entire dataset.  We also know less than we should about the profiles of the victims (those injured and killed).  And we know even less about how those profiles might change as we adopt different definitions of the problem we’re measuring.

There is some recognition of this fact as, in 2013, President Obama signed the Investigative Assistance for Violent Crimes Act into law, granting the attorney general authority to study mass killings and attempted mass killings.  The result was the production of an FBI study of “active shooting incidents” between 2000 and 2013 in the U.S.  The study defines active shooting incidents as:

“an individual actively engaged in killing or attempting to kill people in a confined and populated area.” Implicit in this definition is that the subject’s criminal actions involve the use of firearms. (here: 5)

The study discovered 160 incidents between 2000 and 2013.  And, unlike mass murders (events shown to be relatively stable over the past 40 years), this study showed active shooter incidents to be on the rise.  This study is important as it helps to illustrate that the ways we have operationalized mass shootings in the past are keeping us from understanding all that we might be able to about them.  The graph below charts the numbers of incidents documented by some of the different datasets used to study mass shootings. 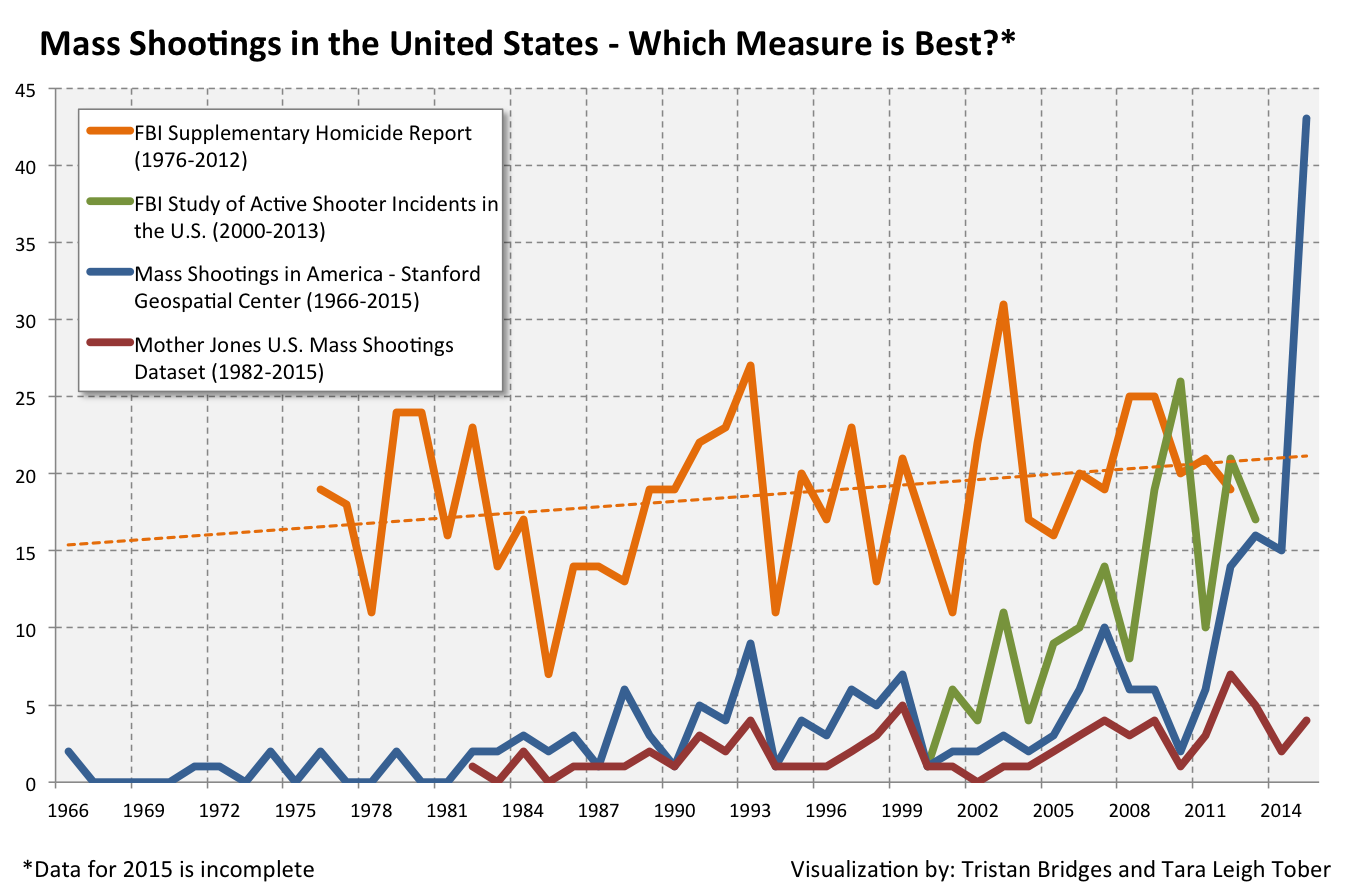 Fox and DeLateur suggested that it is a myth that mass shootings are on the rise using data collected by the FBI Supplementary Homicide Report.  We added a trendline to that particular dataset on the graph to illustrate that even with what is likely the most narrow definition (in terms of deaths), the absolute number of mass shootings appears to be on the rise. We do not include the ShootingTracker.com data here as those rates are so much higher that it renders much of what we can see on this graph invisible.  What is also less known is what kind of overlap there is between these different sources of data.

All of this is to say that when you hear someone say that mass shootings are on the rise, they are probably right.  But just how right they are is a matter of data and definition.  And we need to be more transparent about the limits of both.

*Mother Jones defines mass shootings as single incidents that take place in a public setting focusing on cases in which a lone shooter acted with the apparent goal of committing indiscriminate mass murder and in which at least four people were killed (other than the shooter).  Thus, the Mother Jones dataset does not include gang violence, armed robbery, drug violence or domestic violence cases.  Some have suggested that not all of shootings they include are consistent with their definition (like Columbine or San Bernardino, both of which had more than one shooter).

No matter what, it's pretty obvious that as gun free zone laws become more prevalent in the late 1990s and 2000, the number of mass attacks (not just shootings, which are only about 50%) increases steadily.