Gender Differences in the Experience of Workplace Climate: Findings from Disrupting the Culture of Silence

A couple of weeks ago, Gayle posted a wonderful review of Kris De Welde and Andi Stepnick’s new co-edited book, Disrupting the Culture of Silence: Confronting Gender Inequality and Making 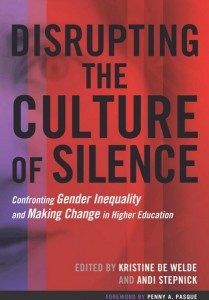 Change in Higher Education. I am delighted to be a contributor to the book, together with my co-author Susan Gardner.

In our piece, entitled “Confronting Faculty Incivility and Mobbing,” Susan and I aim to understand how faculty experience mobbing and, in particular, to understand how mobbing manifests in a public institution with striving aspirations. Mobbing, defined as “a ganging up on someone using rumor, innuendo, discrediting, humiliation, isolation, and intimidation in a concentrated and direct manner,” affects as much as 15% of the working population in the United States.

In addition to mobbing, we were interested to know how differently gendered faculty may experience organizational culture differently. In recent years, the institution where we collected data has worked hard to improve its US News and World Report rankings and to increase research and grant activity. The consequence of these efforts has been a shift in culture that seeks a faculty more focused on research and less focused on teaching. At the same time, state support of higher education has dwindled. The result is an environment in flux, where expectations of faculty seem to be increasing while resources dwindle. We wondered how this organizational culture might shape faculty experiences.

Our findings are based on our analysis of data collected at one institution where we conducted two faculty satisfaction surveys and interviews with 30 women faculty. We examined faculty members’ experiences with a set of questions focused on mobbing (e.g., “I am treated with respect by colleagues” and “I feel excluded from an informal network in my department”) and another set focused on organizational culture more generally (e.g., “The department is supportive of family leave” and “I am satisfied with the promotion and tenure process”).

Our survey results reveal significant differences between men and women in their experiences of mobbing. In particular, women were far more likely than men to report being excluded from their department’s informal network and to feel that their work is not formally recognized by their department. Women were also more likely than men to report feeling isolated in their department. These experiences include two of the most common mobbing tactics: isolating colleagues and discrediting their work by not formally recognizing it.

We also discovered gender differences in how faculty experience the organization’s culture, though these differences were less pronounced than those in our mobbing items. Significantly more men than women reported feeling that their department is supportive of family leave and that there is a strong fit between the way that they approach their research, teaching, and service and the way that their department evaluates these items. As noted, however, these differences were far less pronounced than differences on the mobbing questions.

Our interviews with women faculty suggest that the striving culture may create a campus climate where mobbing is not only common but too often overlooked. With the institution so diligently focused on raising its status, “housekeeping” matters such as nurturing a positive workplace climate may inadvertently shift out of focus.

To combat mobbing on campus, we recommend clear and unambiguous policies that delineate mobbing behaviors from sexual harassment, which is regulated under federal law. This and other recommendations, along with complete details about our data and findings can be found in our chapter, “Confronting Faculty Incivility and Mobbing,” in Disrupting the Culture of Silence: Confronting Gender Inequality and Making Change in Higher Education.