Where Have All the “Marriageable” Men Gone?

Both Apple and Facebook recently announced that they will cover egg freezing for their employees. The policies at both companies provoked a series of smart analyses of why they are simultaneously something to celebrate and challenge. For instance, Joya Misra writes, “In an environment in which many women face motherhood and pregnancy discrimination, policies that encourage women to freeze their eggs supposedly to delay parenthood, may actually discourage women from becoming mothers altogether. Access to paid leave and high quality, subsidized childcare would better support women’s decisions about having children” (here). Dr. Misra and others are absolutely correct that egg-freezing policies fail to do anything about the family-friendliness of workplaces and organizations.1 The existing data on people who take advantage of the specific technology Apple and Facebook are offering to cover for female employees, however, suggests that the lack of family-friendly policies is only one issue worth considering here. Among these issues are: cost of infertility treatment, same-sex families, and explorations of the other reasons reproductively healthy heterosexual women might pursue these options.

There are four obvious groups of women who might pursue this technology. The first are queer or lesbian women (see here, here, and here). The second are women with known or anticipated fertility issues (such as cancer treatment). The third group (and those who have received most media attention surrounding this issue) are professional heterosexual women who may be in a relationship, but don’t want to have children until they’ve reached a place in their career where they feel it will be least professionally damaging. The fourth group are single heterosexual women who might pursue freezing their eggs in the hopes of eventually meeting someone. The data suggest that the majority of heterosexual women pursuing this technology are single. As one maternal fetal medicine specialist and Assistant Professor of Obstetrics and Gynecology—Dr. Chavi Eve Karkowsky—writes,

“[I]f these women were partnered, but still wanted to delay child-bearing, they would probably pursue IVF with their eggs and their partner’s sperm, and freeze the resulting embryos. IVF and embryo cryopreservation is an older, more refined, and arguably more successful technology… What they want is a baby, yes, but with a willing partner for child rearing and a present father for their child” (here).

What Dr. Karkowsky suggests is that women’s decisions to freeze their eggs might have more to do with not feeling like they’ve found a “Mr. Right” (if they’re even looking for Mr.’s in the first place) than with a desire to focus on their careers. In one study of the reasons women pursue egg freezing as an option, women were asked to select any and all reasons to account for why they had not pursued childbearing earlier in their lives. 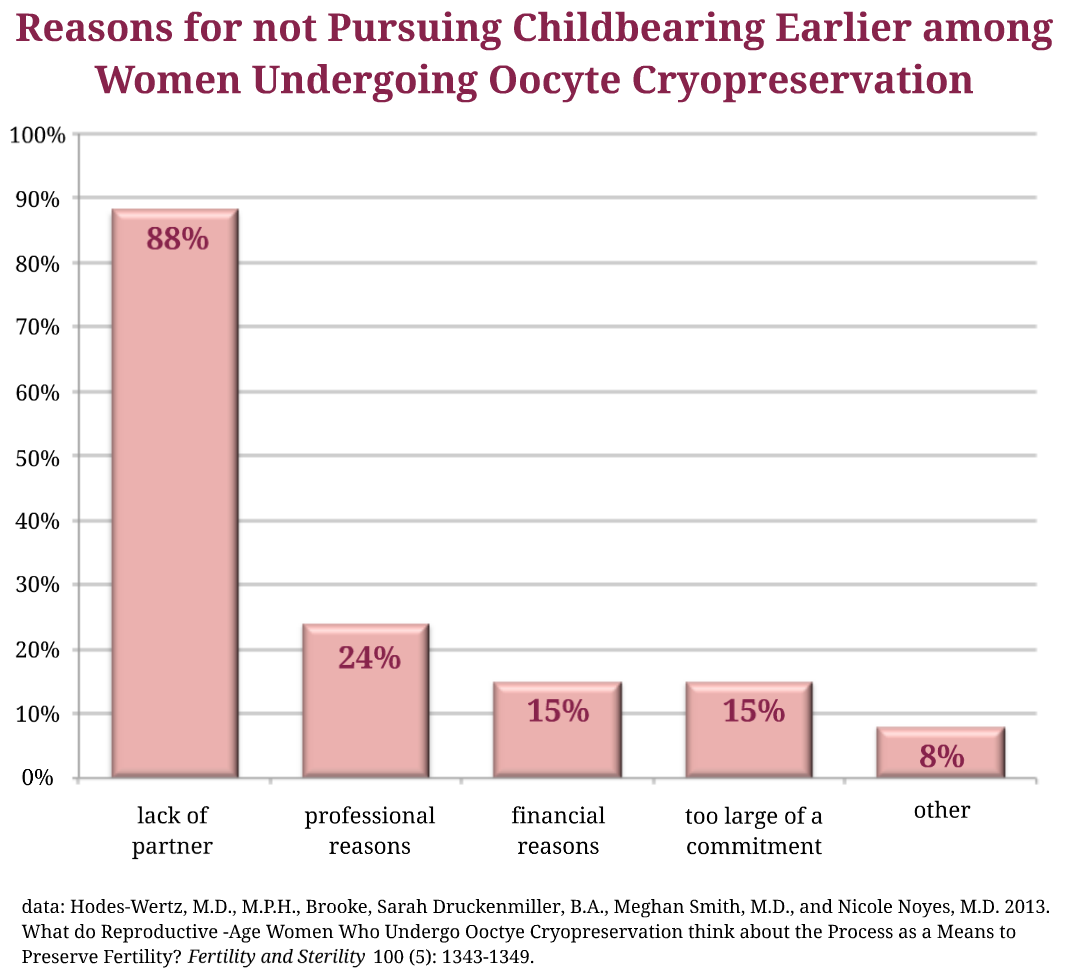 While they were allowed to select all of the possible reasons that might apply, only about a quarter of the sample cited “professional reasons” for not having children earlier. The overwhelming majority of women (88%) claimed that “lack of partner” was the primary reason (see our adapted graph).2

This is related to an issue sociologists refer to as the “marriageability” of men. In the context of rising joblessness in low-income urban communities, William Julius Wilson suggested one consequence of shifts in our economy was that poor, non-white, urban men were disproportionately affected by the shift to a service economy. They’re not out of work because they don’t want jobs; Wilson found that they are out of work because the jobs simply don’t exist. And this has reverberations throughout their communities. One consequence was shrinking “pools of marriageable men” for poor black women (here). “Marriageability” has, thus far, largely been discussed as an issue of economic stability (having a job). And, as Kathryn Edin and Maria Kefalas more recently documented in Promises I Can Keep, poor women remain hesitant to bet their futures on men on whom they may not be able to count to provide economically for their families over the long haul.

Yet, when middle and upper-class women (the groups most likely to pursue cryopreservation fertility options) are asked why they are pursuing egg freezing, “lack of partner” is highest on the list. But many of these women must live in “partner rich” areas with favorable “pools of marriageable men” as traditionally defined. Surely some of this is the result of women finding men who might qualify as “marriageable” by Wilson’s standard, unmarriageable by their own.  As Stephanie Coontz has shown, women and men are asking a lot more out of their marriages today than their parents and grandparents might have.  As such, it might not be all that surprising that a more diverse group are delaying and forgoing marriage. 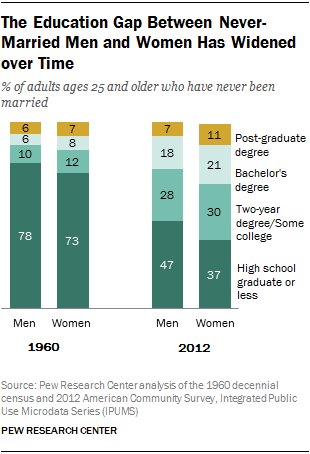 Indeed, as a recent Pew Report investigating the rise in unmarried Americans attests, the population of young adults who have not entered marriage is both growing and changing. For instance, the education gap between never married men and women has widened (see graph). Never married women and men are more educated today than previous generations. More than 53% of never married men today have more than a high school education; 25% have at least a bachelor’s degree. And while it’s a tough economy, Cohen’s analysis suggests that many of these men are finding jobs (often in larger numbers than women in many cities).

We suggest that middle- and upper-class women are delaying and foregoing marriage for many reasons, among them that the employed men they encounter are “unmarriageable” for other reasons.

We are currently working on an article collecting research across the class divide dealing with the “marriageability of men” hypothesis.  Research shows that the “lack of marriageable men” trend is best analyzed as twin trends occurring among different groups for different reasons. For instance, Wilson suggested that “marriageability” primarily had to do with obtaining a job—a task more difficult from some groups of men than others. But, middle- and upper-class women, by this standard, should be marrying in droves—employed men are not always the issue. Men who might be capable of financially providing are not necessarily all women want out of a relationship today.

For instance, in The Unfinished Revolution, Kathleen Gerson found that men and women across a range of class backgrounds said that they desired gender egalitarian relationships. Men were just as likely as women to say that having a partner able to find personally fulfilling work and to co-provide financially was an important part of what they hoped to achieve in current and future relationships.   Things get more complicated, however, when women and men are asked about their backup plans. What happens when those plans for dual-earning, emotionally fulfilling, egalitarian partnerships don’t work out? Women state that they are willing to confront a range of options in terms of fulfilling their family and career goals. Men, on the other hand, are most likely to say that their fallback option does not include the possibility of staying home themselves. Rather, men’s “plan B” appears to put women right back at “plan A” 50 years ago (see Lisa Wade’s analysis here). Indeed, in her interviews with women about their heterosexual experiences in Hard to Get, Leslie Bell finds profound dissatisfaction among 20-something women with their romantic and sexual relationships with men.

While only a small number of women currently choose to pursue oocyte cryopreservation, this issue represents a larger concern with which many women are dealing more generally. Freezing their eggs is one of many strategies heterosexual women might pursue as men are navigating new meanings of what it means to qualify as “marriageable” today.

Thanks to D’Lane Compton and C.J. Pascoe for advanced reading and comments on this post.

1 Whether or not assisted reproductive technologies (ART) are covered by insurance also varies by state in the U.S.  Some states mandate IVF coverage, for instance, while other states do not. In states that do not mandate coverage, it is a more expensive for employers to include coverage in their employee health benefits packages. So, this is not only an issue of “good” and “bad” companies, but one of state legislation that influences organizational policies as well. See here for state-specific policies.

2 It’s important to note that some social desirability bias is likely to rear its head here. For instance, some respondents may have felt that claiming “professional reasons” for not pursuing childbearing earlier may be perceived unfavorably by others.