I just read and reviewed Shannon Wooden and Ken Gillam’s Pixar’s Boy Stories: Masculinity in a Postmodern Age. And I thought I’d build on some of a piece of their critique of a pattern in the Pixar canon to do with portrayals of masculine embodiment. In Black Feminist Thought, Patricia Hill Collins coined the term “controlling images” to analyze how cultural stereotypes surrounding specific groups ossify in the form of cultural images and symbols that work to (re)situate those groups within social hierarchies. Controlling images work in ways that produce a “truth” about that group (regardless of its actual veracity). Collins was particularly interested in the controlling images of Black women and argues that those images play a fundamental role in Black women’s continued oppression. While the concept of “controlling images” is largely applied to popular portrayals of disadvantaged groups, in this post, I’m considering how the concept applies to a consideration of the controlling images of a historically privileged group. How do controlling images of dominant groups work in ways that shore up existing relations of power and inequality when we consider portrayals of dominant groups?

Pixar films have been popularly hailed as pushing back against some of the heteronormative gender conformity that is widely understood as characterizing the Disney collection. While a woman didn’t occupy the lead protagonist role until Brave(2012), the girls and women in Pixar movies seem more complex, self-possessed, and even tough.  [Side note: Disney’s Frozen is obviously an important exception among Disney movies. See Afshan Jafar’s nuanced feminist analysis of the film here.]  In fact, Pixar’s movies are often hailed as pushing back against some of the narratological tyranny of some of the key plot and characterological devices that research has shown to characterize the majority of children’s animated movies. But, what can we learn from their depictions of boys and men?

Philip Cohen has posted before on the imagery of gender dimorphism in children’s animated films. Despite some ostensibly (if superficially) feminist features in films like Tangled (2010), Gnomeo and Juliet (2011), and Frozen (2013), Cohen points to the work done by the images of men’s and women’s bodies—paying particular attention to their relative size (see Cohen’s posts here, here, and here). Cohen’s point about exaggerated gendered imagery of bodies might initially strike some as trivial (e.g., “Disney favors compositions in which women’s hands are tiny compared to men’s, especially when they are in romantic relationships” [here]), but it is one small way that relations of power and dominance are symbolically upheld, even in films that might seem to challenge this relationship.  How are masculine bodies depicted in Pixar films? And what kind of work do these depictions do? Is this work at odds with their popular portrayal as feminist (or at least feminist-friendly) films?

Large, heavily muscled bodies are both relied on and used as comic relief in Pixar’s collection. It’s also true that some of the primary characters are men with traditionally stigmatized embodiments of masculinity: overly thin (Woody in Toy Story, Flic in A Bug’s Life), physically awkward (Linguini in Ratatouille), deformed (Nemo in Finding Nemo), fat (Russell in Up), etc. Yet, these characters often end up accomplishing some mission or saving the day not because of their bodies, but rather, in spite of them. When their bodies are put on display at all, it’s typically as they are held up against a cast of characters whose bodies are presented as more naturally exuding “masculine” qualities we’ve learned to recognize as characteristic of “real” heroes. As Wooden and Gillam write:

Amidst ostensibly ironic inversions of power in the Monsters films and The Incredibles, male bodies are still ranked according to a tragically familiar social paradigm, whereby bigger, stronger, and more athletic men and boys are invariably understood as superior to smaller, more delicate, or intellectual ones. (here: 34)

Wooden and Gillam use Buzz Lightyear from Toy Story as, perhaps, the most glaring example . When we first meet Buzz in the Andy’s room, Buzz does not recognize himself as a toy. He is foolish, laughably arrogant, imprudent, and, quite frankly, a bit reckless. Yet, the audience is supposed to interpret Buzz as the other toys in Andy’s room do—we’re in awe of him. Buzz embodies a recognizable high status masculinity. Sulley in Monsters Inc. occupies a similar body and, like Buzz, he is instantly situated as occupying a recognizably masculine heroic role (a role that is bolstered by the comically embodied Mike Wazowksi, whose body works to shore up Sulley’s masculinity). While Buzz and Sulley—and similarly embodied men in other Pixar movies—are sometimes teased for conforming to some of the “dumb jock” stereotypes that characterize male action heroes of the 1980s, their bodies retain their status and still work as controlling images that reiterate social hierarchies.

In C.J. Pascoe’s research on masculinity in American high schools, she coined the term “jock insurance” to address a very specific phenomenon. Boys occupying high status masculinities were afforded a form of symbolic “insurance” that enabled them to transgress masculinity without affecting their status. In fact, their transgressions often worked in ways that actually shored up their masculinities. This kind of “jock insurance” is relied upon as a patterned narratological device in Pixar movies. Barrel-chested, brawny, male characters are allowed to be buffoons; they’re allowed to participate in potentially feminizing or emasculating behaviors without having those behaviors challenge the masculinities their bodies situate them as occupying or their status (in anything other than a superficial sort of way).  For instance, Sulley, Mr. Incredible, Lightning McQueen, and Buzz Lightyear perform domestic masculinities in ways that don’t actually challenge their symbolic position of dominance. Indeed, the awkwardness with which they participate in these roles implicitly suggests that these men naturally belong elsewhere. 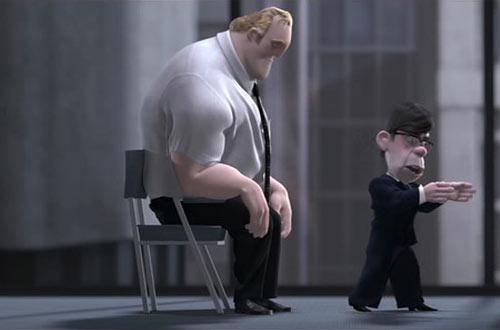 In The Incredibles, Bob Parr’s incredible strength and monstrous body look silly accomplishing domestic tasks or even occupying a traditionally domestic masculinity. His small car helps is body appear laughable in this role as he drives to work. At work, Bob’s desk plays a similar role. His body is depicted as not belonging there—domesticity is symbolically holding him back. This sort of “crisis of masculinity” narrative plays out in the stories of many of these characters. So, when they occupy the role they are initially depicted as denying, the narrative creates a frame for the audience to collectively experience relief as they take on the heroic roles for which their bodies symbolically situate them as more naturally suited. The scene in The Incredibles in which Bob Parr (Mr. Incredible) quits his job by punching his boss (whose physically inferior body is regularly situated alongside Bob’s for comic relief) through a wall is perhaps the most exaggerated example of this. The pleasures these films invite us to share at these moments when gendered hierarchies of embodiment are symbolically put on display play a role in reproducing inequality.

Similar to Nicola Rehling’s analysis of white, heterosexual masculinity in popular movies in Extra-Ordinary Men, portrayals of masculinity in Pixar films work in ways that simultaneously decenter and recenter dominant embodiments of masculinity – and in the process, obscure relations of power and inequality. 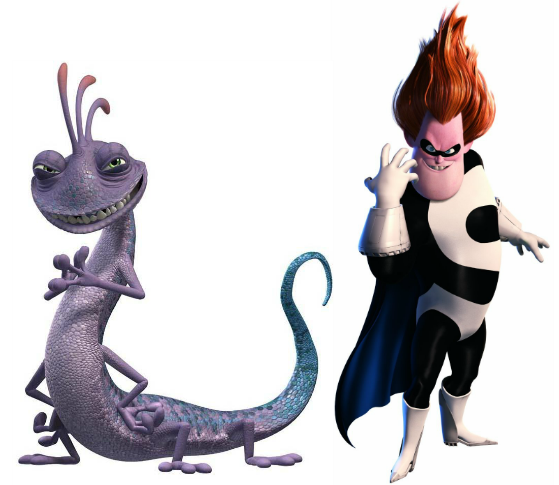 Indeed, side-kicks and villains are most often depicted as occupying masculine bodies less worthy of status. These masculine counter-types (like Randall in Monsters Inc., Sid Phillips in Toy Story, or Buddy Pine/Syndrome in The Incredibles) embody masculinities portrayed as “deserving” the “justice” they are served.

The films in Pixar’s collection show a patterned reliance on controlling images associated with the embodiment of masculinity that shores up the very systems of gender inequality the films are often lauded as challenging. To be clear, I like these films – and clearly, many of them are a significant step in a new direction. Yet, we continue to implicitly exalt controlling images of masculine embodiment that reiterate gender relations between men and exaggerate gender dimorphism between men and women.

Sometimes, when you point out how patterns reproduce inequality, people expect you to provide a solution. But, what would challenging these images actually look like? That is, I think, a more difficult question than it might at first appear. A former Dreamworks animator, Jason Porath, might help us think about this in a new way. Porath’s blog—Rejected Princesses—was recently featured on NPR’s All Things Considered. On the site, Porath plays with “princessizing” unsung heroines unlikely to hit the big screen.  His tagline reads: “Women too awesome, awful, or offbeat for kids’ movies.” 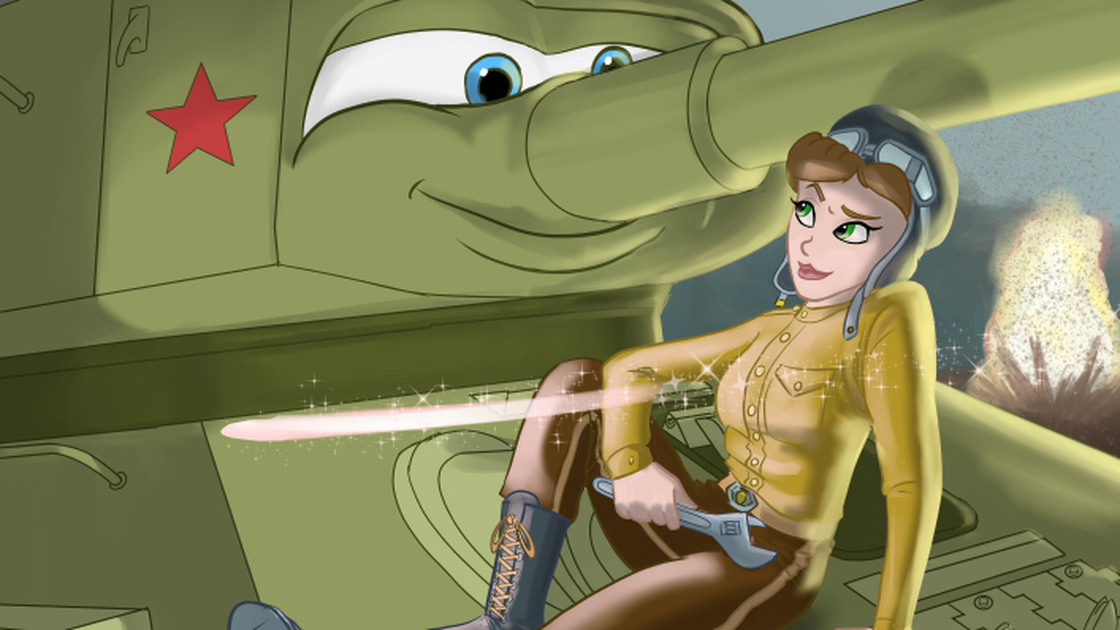 Yet, even here, Porath relies on recognizable embodiments of “the princess” to depict these women—like his portrayal of Mariya Oktyabrskaya, the first woman tanker to be awarded the “Hero of the Soviet Union” award. Similarly, cartoonist David Trumble produced a series of images that “over-feminize” real-life heroines like Anne Frank, Susan B. Anthony, Marie Curie, Sojourner Truth and Ruth Bader Ginsberg. While both of these projects make powerful statements, we need more cartoon imagery that challenge these gendered embodiments alongside narratives and characters that support this project. What that might actually look like is currently unclear. What is clear, I think, is that we can do better.