The “Lucky-Rich,” Emergence of a New Social Class 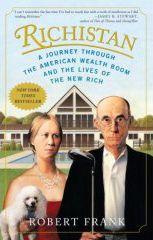 Imagine 12 million super-lottery winners with nothing to do but torment each other and feel superior to the rest of the world. That is pretty much what Robert Frank, Richistan’s author, discovered as a pop sociologist conducting interviews of America’s newly super-rich.

Frank writes a column for the Wall Street Journal on wealth. Not being a sociologist, he was surprised that the super-rich seemed like a separate society with its own culture, and so he called them “Richistan.” I prefer to call them a new social class and give them the label “lucky-rich”, because they got their wealth by being market-lucky.

True some of the wealthy got rich by working hard, but the majority of new wealth under our current financial system arises from short-term speculation such as hedge funds. It can even be argued that the entire American financial system, which has borrowed “to the brim” from other countries, is like a reckless, addicted gambler sliding on a streak of luck. Hedge-funds, securitizing, and other forms of questionable, largely-speculative financing have made millions lucky-rich.

It just so happens that the lucky-rich piled up so much money in the past 20 years of free-market bliss that they also own the media and control much of the global economy. The lucky-rich own 73% of the wealth in America, according to Frank.

David Rothkofp’s in a new book, Superclass: The Global Power Elite and the World they are Making, confirms that luck propels people into the ranks of the super wealthy and super powerful. He argues that a group of about 6,000 global power elite, analogous to C. Wright Mills’ American power elite, literally rule the world. In the absence of a strong world government, a global superclass is building institutions and making decisions about the global economy. Most of this powerful community not only have great influence but great wealth.

Rothkofp estimates that only 6% of the superclass are women. Women, compared to men, have a history of being more peace-loving, more caring about humanitarian issues, and more able to function in partnerships. Our best hope for the future of the world is to get more women into the ranks of the globally powerful. (That’s just a hint of the topic of a forthcoming blog post.)

The lucky-rich are not about old wealth; almost all are infants at being wealthy. Back in the old days when there were only a few of them, society called them the new rich or Nouveau Riche.

In the old days the new rich used to aspire to be old rich, but times have changed. According to Frank, they are quite content with their current wealth, their middle class values, and spending money lavishly on themselves without thought of charities, except those who attends charity balls.

Already America’s rapidly growing lucky-rich constitute a society bigger than many European nations. Since 1980 the number of billionaires in the US rose from 13 to over 500; the millionaire count spiked from a half million to 10 million; and CEO pay skyrocketed from 40 to 300 times that of the average worker.

In their latest annual report, World Wealth Report 2007, Capgemini estimated that a third of the world’s millionaires reside in the United States. They also found that 40% of the “ultra-high-net-worth” (those with a net worth of $30 million plus) live in the United States. Furthermore, they found that despite the economic slowdown in 2006, the number of lucky-rich increased by 10% that year. So, while the lucky-rich can be found around the globe, they are most likely to be American now and in the foreseeable future.

One might expect the lucky-rich to put their power and wealth behind campaigns to reduce poverty and improve social well-being. No such luck. Poverty is on the rise and the median income in the United States is falling. 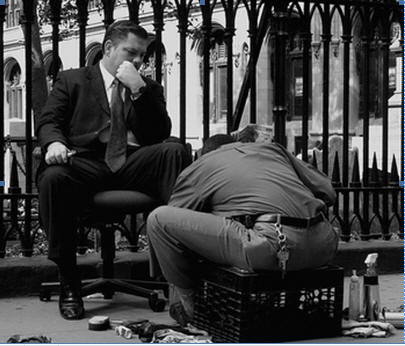 The lucky-rich are too new to appear in sociology textbooks, but their power and influence, as well as their financial portfolios, are incredible. The lucky-rich have popularized America McMansions, SUVs, personal jets, 500-foot yachts, Vail, and many other avenues of conspicuous consumption.

Frank tried to be objective and serious in his investigation, but his tale of travails of the wealthy, led me to take up their cause, tongue-in-cheek, to build sympathy for the stressful lives of the super-rich. Forgive me while I indulge in a few paragraphs of satire.

Pity the lucky-rich for they suffer from “luxury fever,” a malady that can only be fixed by hiding from their friends. Many get weekly psychiatry treatment for either money mania or dot.com dread, mental afflictions that get exponentially worse the higher their net worth spikes. And on top of that suffering, they pay out $50,000 per year for a private school to teach their unhappy children to walk like Paris Hilton.

Pity the lucky-rich because they keep seeing their friends, the Joneses, enjoying things they don’t yet have. Unless they keep buying bigger houses, cars, airplanes, and yachts, they may hear an insinuating remark about not keeping up.

This “little house on the prairie” hints of the loneliness afflicting the new super-rich who build their huge dream house, in this case on the South Dakota prairie, with a wonderful view only to discover that they have no neighbors and no village. Technology replaces their contacts with other people and face-to-face contact requires long commutes in oil-burning carriages. 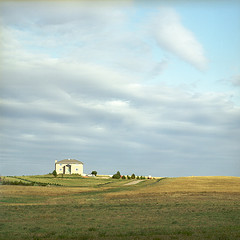 “Little” house on the prairie”     Photo by Peter Baker:

Pity the lucky-rich for their McMansions with dozens of rooms keeping family members apart. Each child has an apartment-like bedroom equipped with TV, video games, and computer, making it needless to get near other family members for days at a time. The undocumented cleaning lady interrupts their lonely computer-game-playing all too often.

Pity the lucky-rich because no one will build a luxury yacht over 500 feet long. Paul Allen of Microsoft fortune solved this problem buying a second giant yacht to follow along behind just to carry the toys, the pets, and the helicopters. It’s called the shadow yacht. Some in this ultra-rich class always fly with a shadow jet to carry the pets and the servants.

Pity the lucky-rich because good help is truly hard to find now that the population of lucky-rich has mushroomed. New schools now churn out “household management” staff. Still, there are so few butlers, that an experienced one can easily command $100,000 per year. Private jet pilots and yacht crew make even more. Paying the high salaries is not the problem; it is losing them to your friends even after offering to double their salaries.

Pity the lucky-rich because of their elusive problem of identity. If you identify with the rich and know that many are jerks, your self-esteem will suffer. Acting like jerks is related to the need to get rid of people always asking for money. While it’s easy to become an authentic rich person, it’s very hard to be a rich authentic person. Having to pretend to be non-rich is difficult, but the biggest challenge is keeping life meaningful, once you’ve achieved your main goals.

My favorite Richistan sob story is the one about the little 11 year old girl who had always gone on trips in the family jet. When asked what she wanted for her birthday, she said “I want to go on a regular jet like all my friends, and I want to see inside an airport.” Life just isn’t fair when a rich kid that has to pretend to be poor.

Switching back from satire to sociology, I want to argue for sociology of the lucky-rich, which would include both a research agenda and courses on the subject. The lucky-rich, or super-wealthy if you prefer, will continue to grow exponentially during the next few years, even if the Democratic Party takes control of Congress and the White House in 2008.

Although Richistan is the only work showing the extremely rapid growth of a new class of the ultra-rich, there are other sociological studies of the affluent. Most notable is Corey Dolgon’s The End of the Hamptons: Scenes from the Class Struggle in American’s Paradise (New York University Press, 2005). Rather than attempt to understand the new rich, Dolgon analyzed the Long Island wealthy and their conflicts with immigrants and other low-wage workers. Of course the life-style of the wealthy depends upon the low-wage worker class. It is an impressive study of social change in the wealth Hampton communities.

While the new American super-wealthy may be a new phenomenon, sociological focus on the wealthy is not. It has always been a component of social class, but in recent years a number of books have emphasized the addictive nature of wealth. Sociologist Philip Slater wrote Wealth Addiction way back in 1980. Other sociologists’ books on this topic include The Rich Get Richer by Denny Braun and Wealth in America by Lisa Keister.

Psychologists writing on this topic generally have examined the influence of wealth on culture. They include Tim Kasser, The High Price of Materialism; Madeline Levine, The Price of Privilege; and DeGraaf, Wall and Naylor, Affluenza (1st and 2nd editions). Jessie O’Neill’s book The Golden Ghetto: The Psychology of Affluence is parallel to Richistan in that it describes a clinical psychology practice in a very wealthy Michigan community.

Of course economists have long been interested on this subject. A decade ago economists Brian Goff and Arthur Fleisher wrote Spoiled Rotten: Affluence Anxiety, and Social Decay in America. Of greater interest to sociologists would be Avner Offer’s recent The Challenge of Affluence: Self-Control and Well-Being in the United States and Britain Since 1950. A 2007 book that I found to be an intriguing explanation of inequality is Falling Behind: How Rising Inequality Harms the Middle Class by Robert H. Frank. (This is Frank the economist not Frank the author of Richistan.) Another recent economic view can be found in the recent The Age of Abundance by Brink Lindsey.

In my opinion, the most important of all these books is The Real Wealth of Nations – Creating a Caring Economics by Riane Eisler (SF: Berrett-Koehler Publishers, Inc., 2007). Eisler offers many suggestions on how caring and caregiving can be integrated more thoroughly into economics, e.g., gift economies. She proposes cultural and structural changes that would render the accumulation of wealth less important, the emergence of extravagance less likely, and inequality less of a problem.

Finally, if you are teaching a sociology class, I recommend that you assign both Richistan and The End of the Hamptons as required reading. Your students will quickly learn the difference between journalism and sociology. You will have very stimulating class discussions, especially if you require that they read Eisler’s book as well.