Elijah Anderson and the Cosmopolitan Canopy on Vox 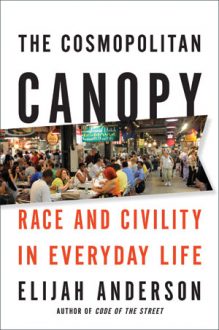 Getting sociological research into public circulation is an ongoing challenge, especially when we are talking about sociologists writing in their own voice about their own original research. Obviously, we here at TSP see that as one of our primary missions, as does our fabulous partner, ASA’s Contexts magazine. But our resources and media penetration are extremely limited. Over the past few weeks, in fact, I’ve had several conversations with colleagues and students about how few venues exist wherein sociologists can reach a public audience in their own, original voice. Even our colleagues that contribute regularly to national media outlets are often explicitly and unceremoniously instructed not to write about their own research and findings.

Against this backdrop, it seemed almost magical when Elijah Anderson’s piece analyzing Donald Trump’s rhetoric about African Americans and inner-city neighborhoods popped into my feed a week or two back. The piece appeared on Vox under the title “The Sociological Theory that Explains Trump’s Assumption that All Black Citizens Live in the ‘Inner City’.” It is, of course, Anderson’s theories that we are talking about — or, rather, that he himself is sharing with a larger public audience.

Anderson’s jumping off point is the exchange that took place during the second presidential debate when Donald Trump responded to a question from a well-dressed African American man by launching into a riff on how terrible inner-cities are, assuming and implying that this man had come from a St. Louis ghetto. Essentially Anderson analyzes that moment as a way to explain how and why African Americans are so often profiled by other Americans and he does so through a larger discussion of his own theories and research on white spaces, black spaces, and the cosmopolitan canopy.

If you already know Anderson’s work, this will be a bit of a refresher course. If you don’t, it will be a nice introduction and primer to his ideas, which have been fairly widely discussed within the field (especially the notion of the cosmopolitan canopy). And either way, I think it is a rare and important treat to see a leading sociologist writing in their own voice and showing how their research and theories can be used for a broad, mainstream public audience.

Kudos to Professor Anderson, and kudos to Vox for providing such a format and opportunity.