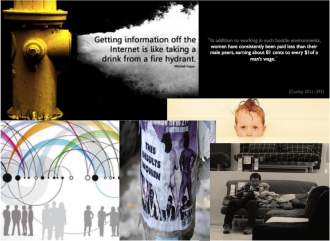 This week, on The Editors’ Desk*, Doug Hartmann enumerated and tried to define** six elements of the sociological worldview. Elsewhere on The Society Pages, our many contributors worked to demonstrate that worldview—enjoy!

*That’s right: we all share one desk. It’s adorable. Possibly even adorkable.

**See what I did there? The man never met a conjunction he didn’t like.

“Representing the Field: What—and Where—is ‘Sociology’?” by Doug Hartmann. A call to arms and lenses, a reorientation and focusing of the sociological imagination, and a sort of manifesto from our co-editor. Also: an adorable photo and a kerfuffle over the spelling of (w)holistic.

“Marketing Men at the Superbowl,” by Stephen Suh. Watching ads to spot changes in the construction of masculinity over time. From manly men to happy losers to men in crisis… what will this Sunday bring?

“Can Bill Gates Close the Condom Gap?” by Molly Goin and Jacqui Frost. The public health effort that’s spawned a million jokes, Bill Gates’ race for the next-best-condom is both serious business and surprisingly sociological.

“An Unlikely Rap Sheet,” by Kat Albrecht. NPR explores the use of rap lyrics in courtrooms. Poetry and self-expression or incriminating confession?

“Brian Southwell on Social Networks and Popular Understanding of Science and Health,” with Sarah Lageson. Who you know and how you feel: a short interview about public health (it’s not clinical, it’s social) and the public’s view of health (some sociology would help).

“Learning to See the Spectrum,” by Evan Stewart. New research from Gil Eyal on the social and cultural changes that have helped shift autism from a specific, and rare, diagnosis to a spectrum of symptoms that now comprise a largely family-diagnosed American epidemic. Just the latest example of the social construction of health and illness.

“The Future of America’s ‘No Child Left Behind’ Reforms,” by Linda Forman Naval.

“Stars, Strife, and Education,” by Hollie Nyseth Brehm. A short look at research on the ties between low educational attainment and depression.