Sketch #3: Dare to Engage in Dialogue

I’ve been thinking a lot lately about what sociologists have to gain from doing “public sociology,” from engaging broader, non-ivory tower audiences more self-consciously and systematically.  In my last post, “Ears to the Ground,” in fact, I gave the example of how, in my own experience with journalists and reporters, I often learn a great deal about current events, institutional dynamics, and emerging social trends that I wouldn’t otherwise be privy to. These are concrete facts, the kind of empircal social realities I talk a lot about but often don’t have the time or access to collect. But there is so much more to be gained from going public as a sociologist.

One of those potential benefits is the understanding and perspective that comes from actually conversing with regular, ordinary folks out there in the real world about our big ideas, social findings, and critical interpretations of social life. These conversations are not always the easiest to have–in fact, non-specialists not only often misunderstand our findings and claims, but adamantly disagree with them. But engaging these disagreements and addressing these misunderstandings–engaging in real, genuine public dialogue and debate–can really help sharpen and shape our own understandings of things as well as make us much more effective participants in public dialogue and public policy debates.

The scholarly benefit of dialogue between social scientists and our publics was illustrated and reinforced for me when re-reading, just last week with students in my senior projects course, a little, two-page column written by the renowned family scholar Stephanie Coontz for Contexts some years back. (It was published well before Chris and I took our turn editing). In that piece, called “Putting on a Public Face,” Coontz recounts her experience in the late 1980s national debate about out-of-wedlock parenting. That debate was ignited when then-Vice President Dan Quayle made a disparaging speech about the TV sitcom character Murphy Brown’s decision to have and raise a child on her own. For Quayle, Brown was a symbol of the bad parenting choices and family arrangements at the root of America’s social ills. He advocated a return to traditional, 1950s family values. Coontz, whose now-classic book The Way We Never Were: American Families and the Nostalgia Trap was just about to be released, seized the opportunity to enter into the public debate.  She spent several weeks on radio talk shows around the country refuting Quayle and the idea American should–or even could–go back to “traditional” family values. 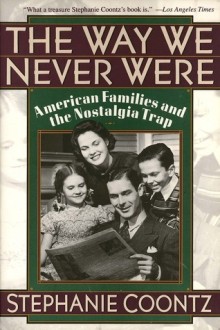 The core of Coontz’s message, based on the research in her book, was to remind folks that 1950s families life wasn’t actually all that great:  50% of black, married couple families lived in poverty in the period; parents were three times more likely to lose children to death; women much less likely to work outside the home, not even allowed to take credit cards in their name. And, perhaps most chillingly, “Incest, rape, child abuse, and wife battering were covered up, leaving victims no place to turn.”

But the reception our family scholar received as not what she expected.  It was not so much that callers sided with the Vice President rather than Coontz about Murphy Brown. It was that they refused to accept her characterization and critique of the 1950s. In spite of all of her research and evidence, “The callers,” as Coontz put it, “were convinced that I was dead wrong, maybe even a liar.”

Rather than digging in her heals and proclaiming herself the expert, Coontz decided to listen more carefully to what they had to say and figure out why she was making people so mad. And once she went back and listened to the tapes of the exchanges, she began to get a better sense of what was going on. On the one hand, she realized that many of the callers were involved in “family rearrangements” that were “highly traumatic,” and there were many things that made their current family lives extraordinarily difficult– long hours of work, failing marriages, relationships of violence, disfunction, and abuse. And on the other hand, they had been raised on a very real nostalgia for an earlier, simpler era of family life, the very mythical notions that Coontz was criticizing.  The result was therefore not only understandable but predictable. “When I insisted on the dark side of the 1950s, they heard me say that their anxiety about contemporary family was stupid, their memory of a more stable time was delusional, and that they were too ignorant to be allowed opinions.”

Armed with this better understanding of the very real travails of contemporary family life and the mythological ideals that were being aspired to instead, Coontz began to devise better ways to make her points and engage the public–she acknowledged their struggles and aspirations first, and then helped them to realize that 1950s had their limitations and drawbacks for families as well (women stuck at home, African American families mired in poverty, violence, abuse and neglect pathologically taboo topics of conversation, etc.)

The result was a much better mode of communication and exchange for all parties involved. But what I want to highlight here is that Coontz not only learned how to better package her own research and findings; she actually learned a lot about contemporary families and family life itself, both the struggles families now face and the ideals and goals to which they, rightly or wrongly, aspire.

“Any time we can add nuance to the conversation about family life or other hot-button issues,” Coontz wrote, “we are performing a public service.” “But often,” she concluded, “when we succeed in reaching out beyond the academy, we also enrich our own research. Sometimes we can even make our work more sophisticated by trying to explain it in simple terms [and] …by connect[ing] our research to emotional and practical realities that the academy may ignore.”

[...] exciting that the question was even asked. As Doug Hartmann shared in his recent sketch, “Dare to Engage in Dialogue,” much good can come from our abilities to translate our findings to the broader public, [...]

[…] work illustrates the utility of ethnographic research as a means of public sociology. In addition to observing the social world around him, Helmreich engaged people he encountered on […]