Dying in Class (and with it)

Our colleague, Monte Bute at Metro State University in St. Paul, is many things to us: respected sociologist, friend and supporter, blogger (https://thesocietypages.org/monte/), former Contexts’ board member, and valued opinion. He’s also a true class act, and it looks like a lot of people agree.

Today we’re delighted to point you all to Minnesota Public Radio’s wonderful piece about Monte’s approach to life, death, and bringing both into the classroom. Please do check it out at http://minnesota.publicradio.org/display/web/2011/02/23/dying-professor-death/

And, for a little more backstage knowledge on the backstage sociologist, here’s the text of Monte’s “about” page on TheSocietyPages.org: 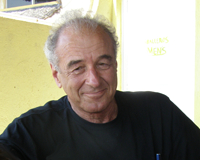 Monte Bute is an associate professor of sociology at Metropolitan State University in the Twin Cities of Minnesota, where he has taught for the past 25 years. He is also a guest columnist on the opinion page of the St. Paul Pioneer Press.

The title of this blog comes from a 2004 essay, “The Making of a Backstage Sociologist.” For the “Full Monte,” read that narrative and “New Tricks from an Old Dog.”

He began teaching at Metropolitan State as an avocation in 1984, and reluctantly began graduate school rather late in life. Bute has published over 60 articles in academic journals and the popular press, and has made over 70 presentations at academic conferences and community events.

Sociologists of Minnesota (SOM) gave Monte the Distinguished Sociologist award in 2004. Bute has received Metropolitan State University’s Outstanding Teacher and Excellence in Teaching awards. He is also the recipient of awards from Minneapolis Community and Technical College, the Jobs Now Coalition, and the Job Training Partnership Association.

Bute is past president of both Sociologists of Minnesota and the National Council of State Sociological Associations (NCSSA). He has also served as editor of Sociograph, associate editor of the Sociological Imagination, and is currently on the editorial board of Contexts, a journal of the American Sociological Association. Monte has been a fellow of the National Endowment for the Humanities (NEH) and the Humphrey Institute of Public Affairs, University of Minnesota.

Bute comes to both sociology and academic life by a rather circuitous route. Majoring in American studies and European humanities, he dropped out of college in 1967 and landed in Berkeley and the Haight-Ashbury district of San Francisco.

Monte then spent the next two decades on the ramparts of social change, working as a grassroots organizer and independent scholar for organizations representing the unemployed, tenants, welfare recipients, union members, and students. He served on the Governor’s Poverty Commission in 1986-87 and was the lead author of A Poverty of Opportunity: Restoring the Minnesota Dream.

Edited on March 6, 2011 to add that the Star Tribune is joining in on the Monte-love with a photo gallery in today’s edition: http://www.startribune.com/galleries/117466018.html.