A Social Psychology of Zoom (Fatigue) 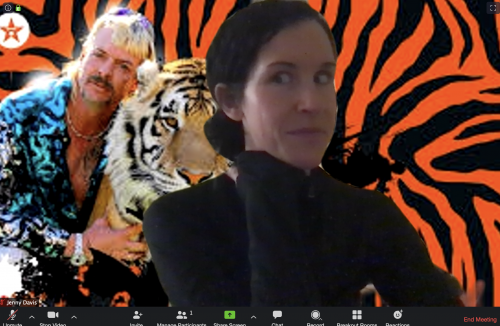 The following is an edited transcript of a brief talk I gave as part of the ANU School of Sociology Pandemic Society Panel Series on May 25, 2020.

The rapid shift online due to physical distancing measures has resulted in significant changes to the way we work and interact. One highly salient change is the use of Zoom and other video conferencing programs to facilitate face-to-face communications that would have otherwise taken place in a shared physical venue.

A surprising side effect that’s emerging from this move online has been the seemingly ubiquitous, or at least widespread, experience of physical exhaustion. Many of us know this exhaustion first-hand and more than likely, have commiserated with friends and colleagues who are struggling with the same. This “Zoom fatigue,” as it’s been called, presents something of a puzzle.

Interacting via video should ostensibly require lower energy outputs than an in-person engagement. Take teaching as an example. Teaching a class online means sitting or standing in front of a computer, in the same spot, in your own home. In contrast, teaching in a physical classroom means getting yourself to campus, traipsing up and down stairs, pacing around a lecture hall, and racing to get coffee in the moments between class ending and an appointment that begins 2 minutes sooner than the amount of time it takes you to get back to your office. The latter should be more tiring. The former, apparently, is. What’s going on here? Why are we so tired?

I’ll suggest two reasons rooted in the social psychology of interaction that help explain this strange and sleepy phenomenon. The first has to do with social cues and the specific features, or affordances, of the Zoom platform. The second is far more basic.

Affordances refer to how the design features of a technology enable and constrain the use of that technology with ripple effects onto broader social dynamics. The features of Zoom are such that we have a lot of social cues, but in slightly degraded form to those which we express in traditional, shared space settings. We can look each other in the eye and hear each other’s voices, but our faces aren’t as clear, the details blurrier. Our wrinkles fade away but so too do the subtleties they communicate. We thus have almost enough interactive resources to succeed and don’t bother supplementing in the way we might on a telephone call, nor do we get extra time to pause and process in the way we might in a text-based exchange. Communication is more effortful in this context and siphons energy we may not realize we’re expending.

So the first reason is techno-social. The features of this platform require extra interactive effort and thus bring forth that sense of fatigue that so many of us feel. We don’t have the luxury of time, as provided by text-based exchanges, or the benefit of extra performative effort, like we give each other on the phone, nor do we have the full social cues provided by traditional, face-to-face interaction.

However, I can think of plenty of video calls I’ve had outside of COVID-19 that haven’t felt so draining. Living in a country that is not my home country means I often talk with friends, family, and colleagues via video. I’ve been doing this for years. I didn’t dread the calls nor did I need a nap afterwards. I enjoyed them and often, got an energy jolt. So why then, and not now? Or perhaps why now, and not then? Why were those calls experientially sustaining and these calls demanding?  This leads me to a second proposal in which I suggest a more basic, less technical interactive circumstance that compounds the energy-sapping effects of video conferencing and its slightly degraded social cues.

The second, low-tech reason we may be so tired is because of a basic social psychological process, enacted during a time of a crisis. The process I’m talking about is role-taking, or putting the self in the position of the other, perceiving the world from the other’s perspective. This is a classic tenet of social psychology and integral to all forms of social interaction. All of us, all the time, are entering each other’s perspectives and sharing in each other’s affective states. When we do this now, during our Zoom encounters—because these are the primary encounters we are able to have—we are engaging with people whose moods are, on balance, in various states of disrepair. I would venture that interacting in person at the moment would also contain an element of heightened anxiety and malaise because in the midst of social upheaval, that’s the current state of emotional affairs.

Ultimately what we’re left with is a set of interactive conditions in which we have to strain to see each other and when we do, we’re hit with ambient distress. This is why Zoom meetings seem to have a natural, hard attention limit, and why sitting at a computer has left so many of us physically fatigued.

Nice essay, totally resonates w my own experience w multiple daily professional zoom meetings. I think another factor is that in regular in person interaction, you can only look at one person's face at a time. On Zoom, in gallery view you can see up to 48 faces at a time. I have a sense that simultaneous parallel processing of that many individual social cues is exhausting!