The Future Must Be Made Accessible 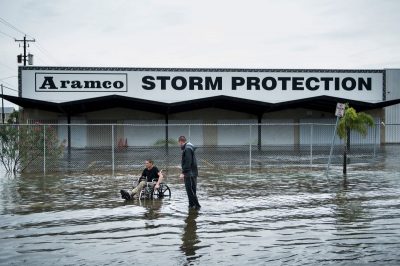 This past weekend I attended Crafting the Long Tomorrow, a conference ostensibly about climate change, though approached through the varied perspectives of scholars working in both the sciences and the humanities. The setting was Biosphere 2, the site of two 1990s experiments to recreate the Earth’s biosphere in a completely sealed environment, under the assumption that humanity would need to evacuate our current planet some time in the future. Throughout the densely packed three days of panels and keynotes, we heard about efforts to measure, curb, combat, and educate on the anthropocentric nature of our impending planetary disaster.

From the outset, there was a relatively awkward divide in the room, though not the disciplinary sort that I would have predicted. Rather, there seemed to be two parallel conferences going on in the same room at the same time: one was being attended and contributed to by individuals who wanted to center identity politics and socio-economic considerations and another by those who did not (or, to be fair, perhaps did not even consider it a possibility). What I found the most striking, however, was that when the former would call out the latter, the critique would be met with an absurd defensiveness. When a respondent to a talk about the first Biosphere 2 experiment pointed out that there was a complete lack of diversity in the all-White participants (the “Biospherians”), another audience member took it upon himself to explain that the experiment was not about diversity among humans, but diversity among plants within the structure. The next morning, when two presenters spoke out about the dearth of people of color within the room, one of the organizers declared that she was made sad by the call-out and didn’t find it fair.

This is not to say that the conference was, in itself, not fruitful. Those talks that did engage with questions of diversity and marginalized communities did so eloquently and with an openness that resulted in compelling discourse. Still, even throughout those talks, not one speaker engaged with questions of physical access, disability studies, or disability rights.

That climate change will affect the most marginalized first and with the most force has been well argued. It is important to recognize the at-risk nature of those for whom the deterioration of our natural world and the systems of infrastructure within means life-or-death situations on an order of magnitude greater than for an abled body. In 2017, for PS Mag, David M. Perry described four different types of ways that disabled individuals might be at-risk during a climate crisis:

health maintenance (medicine, electricity, medical care), ability to move in and through physical areas, effective communication access, and what the experts call “program access.” Some of these needs are obvious: People who depend on dialysis or oxygen need power. Diabetics need insulin. Chemotherapy patients need hospitals that work, and so forth. A wheelchair user might well not be able to cross flooded areas, climb stairs to escape rising water, or access a shelter. Shelter space might also be inaccessible because messages about locations aren’t communicated in sign language or Braille. Such spaces might be too loud or chaotic for people with sensory integration needs

Perry’s piece provides an excellent overview of the problem and I suggest you read it.

But I also suggest/implore scholars, artists, researchers, and scientists to start centering disability studies within their work on climate change. You might approach it from an infrastructural perspective, extending work of scholars like Cassandra Hartblay, who has argued that “When accessible design elements are installed to meet minimum standards, they are “just for the check mark” and often do not “work.”” This might relate well to research on, for instance, ADA standards and how well they would hold up to the various climate disaster scenarios. Or you might take a more theoretical approach and build on Rosemarie Garland-Thomson’s work on fitting versus misfitting—something we’ve talk about a lot at Theorizing the Web. What happens when the environment shifts so drastically that the fits become the misfits—what do the misfits become?

There is a rich trove of research to be done here and it’s not being addressed on the necessary scale. Let’s do better.

Gabi Schaffzin is a PhD candidate in Art History, Theory, and Criticism, with a concentration in Art Practice, at UC San Diego. The headline of this piece is a shout-out to Annie Elainey’s awesome t-shirt project.