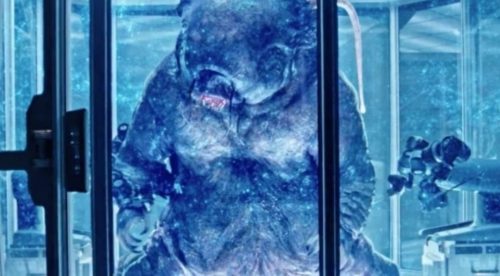 I’ve written about Star Trek a few times (here and here). I think I still agree with most of what’s written there. PJ Patella-Rey also wrote about Star Trek on the blog here. My favorite commentary on Discovery, which I’ll do my best not to simply repeat is by Lyta Gold which you can read at Current Affairs. What follows are some vaguely connected thoughts I’ve had about Discovery‘s relationship to the rest of the canon after having just gotten caught up with the series.

While watching Discovery I’m haunted by the idea that I am incapable of liking any new Star Trek offering because my love of Trek is fueled by nostalgia and not a reverence for its politics or innovative storytelling. Or, more accurately, nostalgia and reverence work together so that the moments of pre-9/11 Trek (is there really any other more distinctive delineation? More on that soon.) that are just too corny or clumsy to enjoy on their own merits can be ignored and the good parts can really shine. With the nostalgia missing I can’t enjoy any of it. I think this is what the writers worry about and try to invoke a nostalgia for the present with completely unnecessary Spock-centric plot points. When media producers make us feel like there are childhood memories out there we haven’t seen yet —that is all fan service really is— it either works through, paradoxically, original storytelling or it just falls flat. Much of Discovery‘s references to the original series falls flat, I think.

For a few years Britney Gil and I would host weekly Star Trek watch parties at our house and I would curate three or four shows into social themes, most of which are preserved on my web site. As I watch Discovery I try to place each episode within themes I’ve already identified but usually come up empty-handed. Only part of this is because these episodes have more of an arch and are less serialized but that’s only part of it. While each individual episode of pre-9/11 trek were Mondrian-esque depictions of a single moral theme —this week Odo deals with the longing for a people, please see Arendt’s The Human Condition for more details— Discovery paints de Kooning-style season archs. Still a limited pallet but the themes are allowed to mix more, overlap, and emerge. I went to trek for the Mondrian rationalism but perhaps de Kooning is more appropriate for the times. More stylistically contemporary and better equipped to deal with the issues we want to see portrayed in TV.

It is not enough to say today’s Star Trek is just different without saying what is gained and lost. Trek changed completely after 9/11. Pre-9/11 Trek started in the braggadocio of mid-century American ascendancy and, after negotiating the malaise of the 70s and early 80s with a series of movies about aging wherein the Kirk-Spock-McCoy triumvirate is simultaneously American hegemony and the aging audience, leaned heavily into a liberal end-of-history optimism. Picard was the standard bearer for the optimism of a perfected humanity and Sisko and Janeway were left to stress-test that vision amidst threats to (Deep Space Nine) or total separation from (Voyager) all of the institutions and cultural practices that make the perfection possible. In so doing we found that Earth-as-socialist-paradise isn’t something you arrive at but something you’re constantly making. In that way it is very de Kooning but we only ever got glimpses of it at Sisko’s restaurant or stories from the Voyager crew who had to constantly articulate what the hell humanity even was to people who’d never heard of us before.

Post 9/11 however, utopia feels naive at best and low key fascist at its worst. So much order and safety has to come from a wide-spread and slow abandonment of personal freedoms. And so, instead of dwelling in all of the minute problems of utopia and all of the beautiful contradictions we can discover about ourselves when everything basic to survival is taken care of, Trek becomes about the seemingly inevitable moments when it all comes crashing down. It is defending, through the thin blue (red, and gold) line that we every get to keep a peace that is now revealed to be fragile. Enterprise, having been the closest to 9/11 was so painfully on-the-nose about it all that it not only had a literally Earth-shattering problem to deal with, but that it spent its four short seasons in a “temporal cold war” which was nothing less than competing factions trying to rewrite history. Discovery, let alone J.J. Abrams’ three movies and Enterprise feels less like Trek not because they lack optimism, but because these post-9/11 shows require optimism at all. Good Trek, pre-9/11 Trek was, at base, all about not even needing optimism because of course everything would work out: humanity was part of a galactic federation of peace and exploration.

One big thing that the nostalgic veil of pre-9/11 Trek obscures from our vision is just how much of Reagan America creeped into each episode. Remember that the very first episode is literally humanity on trial for being savage. Picard’s defense is not that humanity is not inherently savage (a point that would be scientifically true and would not accept the Hobbesian frame that holds together most reactionary politics) but that it learned and became better through struggle and learning from mistakes and atrocities alike. All the way up to Voyager, in the episode Death Wish Janeway is literally adjudicating between individuality and the state’s prerogative to maintain order, finding in favor of the former. In both of these examples humanity is dealing with Q which, always show up when the writers want to get to questions of human nature as quickly and effortlessly as possible.

Discovery has yet to have a Q episode, both literally and in the sense that it is not willing to comment on humanity as such, opting instead to make references to the moral obligations of Starfleet. I cringe each time the Discovery crew say something to the tune of “We are Starfleet and that’s why we won’t abandon you / want to know what that thing is / are ready to sacrifice ourselves for everyone else.” At first I thought it was because those monologues just sound corny but while that’s true I think the real reason is this: in previous series the characters would invoke humanity not Starfleet. Perhaps removing the Earth-centric chauvinism implied by humanity is a good idea stylistically —prefiguring a truly universally inclusive language— but in that case they should be invoking the Federation and the civilian governmental form, not Starfleet. When Starfleet is mentioned in pre-9/11 Trek it’s usually derisively, talking about how hard the academy is, how useless they are in protecting the colonies that gave rise to the Maquis, or how disconnected they are from the rest of Federation life.

Aesthetically, Discovery has its moments, mostly for the better. Costume and set design are beautiful. I find the ship, and I recognize that this is purely subjective, absolutely hideous. It is disproportionate in every way, which also makes it look different from every angle in a way that makes it difficult to fall in love with. I would, however, say more or less the same thing for the Enterprise-D and Deep Space Nine. Starfleet ship design, in my opinion, peaked in the 2370s with the Intrepid, Sovereign, and Akira-class ships. Don’t @ me about this.