Power Online: The internet as a discourse 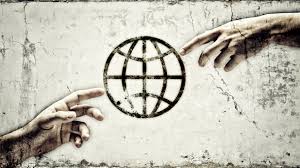 I’ll start by stating the obvious: power manifests in myriad forms. In this piece I’ll be focusing on the normalizing power of discourse. Normalizing discourse refers to the way language – talk, text, and body – reinforces the status quo and crystalizes social structures, including our own place within those structures. I will draw on my own research about religion online to make the case that the internet fosters normalizing discourse, while at the same time, leaving room for subversion.

I suggest conceptualizing digital media as a Foucauldian Discourse, or, for a lack of a better analog: the street, the marketplace. What I mean by Foucauldian discourse is the systematic ways in which communication shapes our social norms. This happens online because, while we use digital media individually, we are taking part in a social space. Online media includes the multiplicity of opinions experienced through an individual’s lenses. We use digital media in personalized ways: to create a ‘personal’ profile, to do your own banking, travel, shopping, etc. There are shopify business websites, a direct product of ecommerce, which again is by extension is born out of digital media. But the experience in not fully individualized: the ‘street’ or ‘tribe’ is always at the background of online activities. Friends and family (‘the tribe’) react to personal profiles in social media; reviewers and commenters (‘the street’) “shout” their opinions about the latest gadget you just purchased, or the news you are reading; and always, the watchful eye of a big company – Google, Microsoft, Apple – is present. Therefore, online communication is never done in a vacuum. Even if I am watching cat videos by myself at 3 AM, I am surrounded by society. Online, the individual user is communicating with ‘the masses.’ They are out in the street, or at the marketplace, or at school, or at church, even if they are physically alone in bed. Online, you converse with “everyone.” And these online ‘conversations,’ I argue, are the essence of conceptualizing online media as Foucauldian discourse.

Understanding digital media as discourse means theorizing digital communication as a set of systematic statements and online practices that create, construct, and negotiate social norms: as spaces of power and resistance. And, while the internet allows for multiple voices and counter-spheres, there are policing and regulating processes that make online media a normalizing force. I’d like to share two example from my own work on religion online that reflect how digital media can be conceptualized as a site for power and resistance.

But then, a lone commenter contests the point:

No way?? [מה פתאום]. I’ve discovered this by accident at a young age and for years my conscience was killing me. I tormented myself long and hard to stop and I almost succeeded. I thought to myself, when I get married this will stop by itself. Today I am married and I am so not sorry for my experience with this because this is how I’ve learned what feels good for me and could reach pleasure also with my partner. I hear about married women that do not enjoy [intercourse] and don’t know how to have fun with their husbands. And both sides are then frustrated. I’m not saying you must but if you have this experience it is for sure not bad.

This spark of resistance is short lived, as other commenters collaboratively dissent: “Are you not ashamed?” “Who do you think you are?”, etc. This is just a small example of how the democratic features of the internet can and are being used to reinforce traditional, patriarchal and even fundamental, worldviews. However, the inkling of resistance shines through.

In other cases, the resistance shines brighter. Indeed, the internet is multiple and complex. Thus, not all internet-based discourses will look the same. As such, I find discourses in my research that subvert conservative religio-political positions.

In a current project, I am examining religious resistance online via Twitter. Specifically, I’m looking at the hashtag #EmptyThePews which is part of a movement of Ex or liberal Evangelicals, using social media to resist Trumpist churches. Here, twitter and Facebook are used to openly share traumatic church experience, and to slowly form a different conception of what a church can and should be – free of racism, sexism, and hate. The leaders of this movement are calling people to empty the pews of churches that support Trump or hurt their members in other ways. For example, “If your church supports @realDonaldTrump, ask your pastor to name one quality Christ and Trump have in common. Then walk out. #EmptyThePews” Or: “If your pastor doesn’t condemn racism tomorrow…walk out. #EmptyThePews”. This hashtag is used to shed light on these experiences, and perhaps, to slowly change the discourse around racism and its deep ties to religion.

To think of power as discourse and of online communication as a space for normalizing discourse does not mean we are doomed to be controlled by religious authorities and alt-right internet trolls. Discourse is created and maintained by us – and so we can and must participate in it. True, some have more power to influence the discourse then others, but we can try and contribute to the discourses we are part of online and offline.

The internet has emerged as a technology with the potential to level the playing field in a number of discursive domains, but it is not the fated savior of liberal values it has been extolled to be. It is more appropriately recognized as a variant of other democratic institutions, the agora, the voting booth, spaces that can only be utilized to their full intended potential when we all engage and participate in them. In the same way that democracy is threatened when we don’t cast our ballots, so too the internet can serve as an echo-chamber for only the most fanatical and extreme of voices. While the internet does offer a greater sense of accessibility and allows for different voices to be heard, this ‘participatory culture’ does not always lead to change, or to an open and respectful dialogue. We should not be deceived by the seemingly democratic capabilities of the internet. The street can also be democratic, and many lynches happened at the market place. The fleeting feeling of online media, along with its blurring of private and public, create a confusing space. One way to think about this confusing space is to consider it a discourse, in which ‘they’ or ‘everybody’ – the common-sense, the norm – take the front stage. In this space, it is the work of normalizing social beliefs and behaviors that is taking place, unless counter-publics insist on alternatives.  Digital media are about defining and negotiating definitions, about power and resistance. And just like in a democracy, change won’t happen if we don’t demand it.

Ruth Tsuria, Assistant Professor at Seton Hall University College of Communication and the Arts, has earned her Ph.D. from Texas A&M University Department of Communication.  Her research investigates the intersection of digital media, religion, and feminism. Awarded Emerging Scholar in Religion in Society, Her work has been supported by various bodies, including Women and Gender Studies Program at Texas A&M University. She is currently working on her first book Holy Women, Pious Sex, Sanctified Internet: Exploring Jewish Online Discourse on Gender and Sexuality.

A version of this work was presented at ASA Media Sociology Preconference, 2018