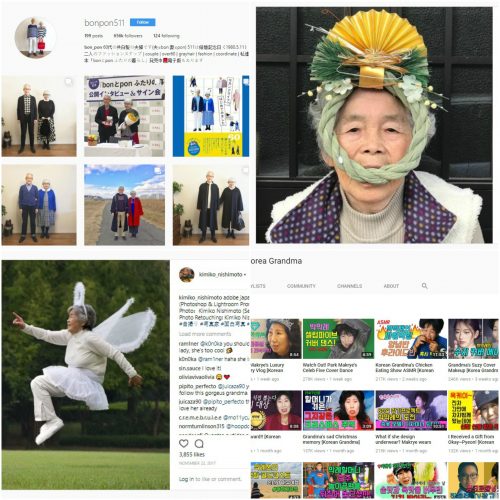 These days, Influencers are starting off younger and older.

As the earliest cohorts of Influencers progress in their life course and begin families, it is no surprise that many of them are starting to write about their young children, grooming them into micro-microcelebrities. Many Influencer mothers have also been known to debut dedicated digital estates for their incoming babies straight from the womb via sonograms. Influencer culture that has predominantly been youth- and self-centric is growing to accommodate different social units, such as young couples and families. In fact, entire families are now beginning to debut as family Influencers, documenting and publicizing the domestic happenings of their daily lives for a watchful audience, although not without controversy. But now it seems grandparents are joining in too.

Fashion Instagrammers @bonpon511 from Japan are a couple who have been married for 37 years and are in their 60s. Since debuting in December 2016, the couple has amassed over 656,000 international followers on Instagram who enjoy the matching outfits they dress up in. Their daughter takes these photographs at their request, having shared more outings with her parents as they are approaching retirement. They regularly collaborate with fashion brands by featuring their latest apparel in sponsored posts, attend fashion events as special guests, and have even been ambassadors for brands. In their photos, the woman usually postures herself to appear smaller than her husband by standing two steps behind him, and convey dependence on him by holding on to this arm. Interestingly, such poses are a common trope among young Influencer couples, utilised to solicit care and likeability from audiences through the notion of agentic cuteness. Most recently, the couple launched a photography book that describes their sense of style and the labour behind mixing and matching pieces.

Popular media reports on the couple tend to express surprise that they are still having “fun” despite their long marriage, that they are “adorable” for being fashionable at their age, that they have a “keener eye” for fashion than young people, and that their sustained practice of matching requires “devotion“.

Japanese photographer Kimiko Nishimoto is 90-years-old this year and has gone viral via several popular media outlets for her quirky self-portraits. After having been a housewife for several decades, she took up photography through a beginners’ class taught by her son and has been experimenting with the medium ever since. Although she has honed a keen eye for taking beautiful photography of nature and close-up objects on her blog, and has even published a photography book based on her works, Nishimoto is still best known for her staged self-portraits in which she exhibits artful photoshop skills to depict adventurous lives of the elderly. Last year, she launched a photography exhibition in Tokyo based on the theme of the elderly and play.

Popular media reports on Nishimoto have emphasised her “comical” subject matter, the “bizarre” nature of the scenes in which she photographs herself, her sense of “adventure” well into old age, and for being a “cool” icon for dealing with the weird and the wonderful in her art. 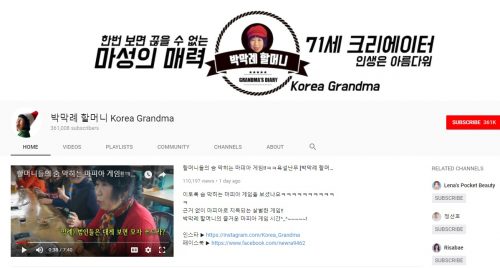 Park Mak-rye, also known as Korea Grandma, is a 70-year-old vlogger from South Korea. Her granddaughter initiated the channel (planning, shooting, and editing the content) as a way to keep Park active and to combat dementia, which runs in the family. In her videos, Park’s content resembles that of the average lifestyle Influencer on Instagram, as she produces makeup tutorials, travelogues her holidays, shares cooking recipes, and documents behind-the-scenes footage from her media appearances. Her popularity has culminated in appearances in mainstream print magazines in South Korea’s highly competitive entertainment industry, and she recently received the Silver Play button from YouTube. However, she continues to run her diner as her primary business. 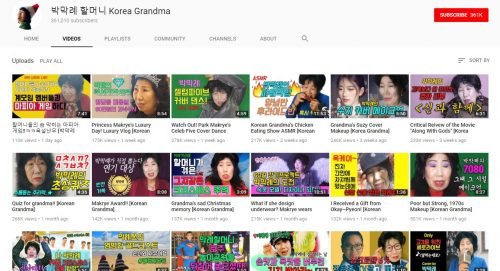 Popular media reports on Park have praised her for showing off her wrinkles and living elder life in the “raw“, commended her for expressing herself despite not being formally educated and writing “illegible” captions, and described her fame as “unique” given the high poverty rate among the elderly in South Korea.

As I prepare to craft a research project around elderly Influencers, news reports on this small sample of users culminate in three themes:

Firstly, reports backstory the pre-internet celebrity lives of these elderly Influencers, asserting that their prior occupations did not command the skills that corroborate with that of content production for the internet; this emphasises that while digital literacies in the Influencer industry are relatively new and usually practised by the young, they can also be learned.

Secondly, reports trace the trajectory of technology proficiency acquired by elderly users on the internet; these variously toy with the (false) idea of the ‘digital native’, but ultimately pinpoint a younger person (usually a child or grandchild) who is more aware of the internet landscape, and who has facilitated the elderly Influencer’s creative skills required for content production and technical skills required for managing a public social media presence.

At this stage, I am still exploring various forms of internet celebrity among elderly people across different platforms in East Asia, while scoping out concepts and relevant theory that I will have to sink my teeth into later. So far, I am curious to discover whether elderly Influencers have different motivations and strategies for producing content for followers, how they may relate to followers across age and cultural differences, and whether/why the ways we talk about elderly people who are proficient on the internet are clouded in exoticism and Orientalism. If you have any recommendations, please send them my way.

Some other elderly Influencers I have recently discovered and enjoy include 106-year-old Indian cook Mastanamma who is reportedly the oldest content creator on YouTube with her channel Country Foods, 89-year-old American fashion Instagrammer @baddiewinkle, and Facebook-famous American sisters Gramma and Ginga who are 104 and 99-years-old respectively. Do you know of any other elderly Influencers on the internet? Who do you follow and what do you think of them? I’d love to hear from you.