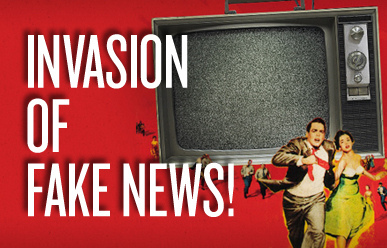 The Daily Beast ran a story last week with this lede: “Roseanne Barr and Michael McFaul argued with her on Twitter. BuzzFeed and The New York Times cited her tweets. But Jenna Abrams was the fictional creation of a Russian troll farm.” Abrams, the story goes, was a concoction of The Internet Research Agency, the Russian government’s troll farm that was first profiled in New York Times Magazine by Adrian Chen in June 2015. During its three-year life span the Abrams account was able to amass close to 70,000 followers on Twitter and was quoted in nearly every major news outlet in America and Europe including The New York Times, The BBC, and France 24.

The Abrams Twitter account was a well of viral content that over-worked listicle writers couldn’t help but return to. Once the account had amassed a following the content shifted away from innocuous virality to offensive trolling: saying the civil war wasn’t about slavery, mocking Black Lives Matter activists, and jumping on hashtags that were critical of Clinton. “When Abrams joined in with an anti-Clinton hashtag,” The Daily Beast reports, “The Washington Post included her tweet in its own coverage. One outlet used an image of a terrorist attack sourced from Abrams’ Twitter feed.”

The Abrams account, they write, “illustrates how Russian talking points can seep into American mainstream media without even a single dollar spent on advertising.” This framing portrays journalists as passive filters that automatically parrot whatever popular Twitter users say. Journalists are supposed to be critical fact-checkers and the last defense against misinformation entering the public sphere. The rate at which false information keeps “seeping” in seems to be growing, and so it is worth asking: are there structural reasons that fake news keeps making its way into reputable news sources?

Jay Rosen is the obvious person to answer this question, and to some degree he did answer it last March when he announced a partnership with the Dutch news site De Correspondent: “if you’re doing public service journalism” he wrote, “and trying to optimize for trust, it helps immensely to be free from the business of buying and selling people’s attention.” Not having commercial sponsors also means, “not straining to find a unique angle into a story that the entire press pack is chewing on, it’s easier to avoid clickbait headlines, which undo trust. Not chasing today’s splashy story can hurt your traffic, but when you’re not selling traffic (because you don’t have advertisers) the pain is minimized.”

It is frustrating that prominent public radio personalities like Ira Glass are running in the opposite direction. Glass, talking to an AdAge reporter in 2015 confidently stated, “Public radio is ready for capitalism.” This is dangerous because much of Russia’s disinformation campaign and Trump’s home-grown trolling relied on the capitalist attention economy that governs every major media outlet. Breitbart and InfoWars republished Abrams’ tweets, but so did The Washington Post and The Times of India. The only thing these news organizations have in common is their advertiser-centered business model.

It’s no secret that most staff writers are underpaid and over-worked, and they are the lucky ones. There are thousands of wildly talented freelance writers that spend half their time writing and reporting and the other half chasing down their overdue paychecks. Reporters with no research budget and a huge publishing quota are understandably going to do a bit of Googling, pull a quote from Twitter, and call it a day. Over-worked and under-paid journalists are the weakened immune system that lets viral fake news take over the body politic.

Herman and Chomsky, in their famous book Manufacturing Consent, pointed to the high cost and time-consuming nature of good journalism as one of the five “filters” that discourage critical reporting. Instead of going to the source of the story, journalists go to police departments and corporate PR offices to grab quotes. This is not because they are lazy, but because they lack the time or money to report the story from scratch. PR offices and police departments’ spokespeople offer one-stop-shops for an official account of what happened in any given story.

The Yes Men—two artists who, for example, will pose as the spokesperson for Dow Chemical and tell a BBC reporter that they take full responsibility for the Bhopal Disaster— know that news agencies are more likely to report on something if they are handed a media package or are offered access to a talking head from a well-known organization. Their hoaxes have real consequences: sending corporate stocks temporarily tumbling and attracting mainstream attention to ignored environmental disasters.

Twitter affords a similar shortcut to newsworthiness. Putting someone with a high follower count (to say nothing of a blue checkmark) in your story increases the possibility of reciprocal attention: you click my content and I’ll click yours. When someone with 70,000 followers says something controversial to their substantial audience, that’s worth a shout out in your news story, especially when that story is little more than a survey of what people are talking about. That Twitter user, after seeing a spike in followers and  mentions related to the article, will share it themselves sending off a quick, “was included in this thing, haha.” This is the mundane, reciprocal manufacturing of attention that feeds micro celebrity and now, apparently, geopolitics. Anything with a decent follower account is low-hanging fruit for finishing a reporter’s daily content quota.

What is absolutely maddening is that the demands and responses to the fake news phenomenon have centered on social media and the algorithms that govern their behavior. Some of the solutions out there —cough Verrit cough— are either so absurd that they can only be explained as either the product of cynical opportunists looking to make fact-flavored content, or the result of too many well-connected people not understanding the nature of the problem they are facing. Both seem equally likely. The intent barely matters though, because the result is the same: a more elaborate apparatus to churn out attention-grabbing media for its own sake.

Social media has exacerbated and monetized fake news but the source of the problem is advertising-subsidized journalism. Any proposed solution that does not confront the working conditions of reporters is a band aid on a bullet wound. The problem is systematic, which means any one actor —whether it is Mark Zukerberg or Facebook itself— is neither the culprit nor the possible savior. So long as our attention is up for sale, people with all sorts of motives will pay top dollar.