Sex Work and the Value of Fantasy in Blade Runner 2049 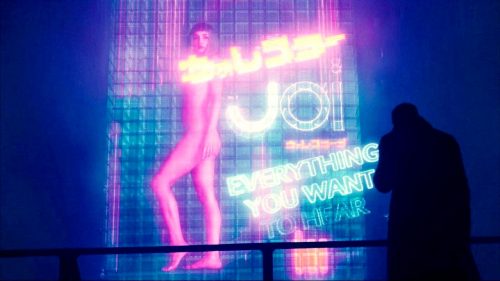 I have a confession to make. I am an outsider. I never saw the original Blade Runner, and I don’t particularly even like sci-fi. Going in, I also didn’t have a clear idea about what the movie was going to be about, though my partner did give me an excruciatingly long history of the movie’s relationship to noir/sci-fi/western films on the way to the theater. (I literally had to check to see if my ears were bleeding).

Perhaps this makes me unqualified to speak about the merits or faults of the film. On the other hand, for this reason—and reasons of my own personal history—I may have related to this movie differently than other reviewers.

I write this reflecting as an online sex worker—someone who professionally plays the role of virtual girlfriend. Someone who, despite the fact that I am a living breathing human being with my own life and agency, takes on a role in my work that looks strikingly similar to Joi—the holographic AI girlfriend of K, the protagonist.

The majority of my work takes the form of phone sex (which, yes, is still a thriving industry). Part of this job is relating to my regulars as though we know each other IRL, even if we don’t. I ask them about their day as if it has consequences for my own life, I talk to them about their work stress, I pretend to share a drink or a meal with them, I rehearse conversations and negotiations that they want to have with their “real life” lovers as a proxy fill-in, and I sometimes even fight with them to urge them to express feelings that they otherwise resist acknowledging.

For this reason, I felt an odd and surprising kinship with Joi. We meet her when K comes home and is out of sorts after a difficult assignment to kill a fellow replicant. She first appears as a post-war housewife who prepared a meal for him, and when that doesn’t do the trick she moves to a sportier version of herself, and then to a more glamorous one—all in an attempt to give him the girlfriend experience that he needs. While I don’t typically do this within the same interaction with a client, I have often felt this sort of whiplash from call to call. My job, like Joi’s, is to create for my clients the sort of relational experience that they desire or need at a given moment, which often means selectively revealing dimensions of myself (MILF, sexpot, intellectual companion, caring partner). In other words, Joi, the AI “pleasure model,” serves a function that is deeply resonant with my own.

It is no surprise, then, that I feel somewhat implicated in the two dominant critiques of her. Let me look at both of these in turn.

It is a common trope in sci-fi and speculative fiction to view AI as a threat to our humanity. I will refer to this as the technophobic critique. Those who hold this seem afraid that this technology is so seductive that we will be unable to transition from AI back to human interactions. Or in other words, we will be so enamored by AI’s ability to give us exactly what we want without asking for anything in return that we will reject the reciprocity required of human relationships. For example, when speculating about a future where AI can spontaneously interact with us, Daniel H. Wilson suggests that it will cloud our judgment. He says, we will be “completely unable… to defend ourselves, at least for a little while, and that may involve people buying a lot of products because they’re in love – because they are literally in love – and that scares the shit out of me.”

Who is Wilson afraid of us being in love with? Well, with the machines. The fear runs something like this: because machines have no agency of their own and can instead be programed to meet our every need, we will be unwilling or unable to recognize the fruitfulness of less immediately gratifying human interaction (I do not choose the term “fruitful” accidentally, given that reproduction is an ongoing theme of the movie).

Related to this is what I will call the feminist critique (of the second wave variety), which is leveled against sex workers at large, and not just AI ones. In this critique, sex workers who participate in fantasy production bow to the desires of cis men within hetero-patriarchy, ultimately alienating both men and women from themselves and each other. In this conception Joi offers no “real” connection. More pointedly, this critique pictures men as lonely, sad, and incapable of connection, and sex workers as those who are either forced into meeting men’s needs in an exploitative system, or as capitalizing on their loneliness. Pornography is often brought up in this conversation, and not surprisingly, it also features in Blade Runner reviews. For GQ, Scott Meslow asks: “Isn’t this a plausible evolution of pornography? That a company might develop an artificial intelligence that is explicitly designed to treat a sad, lonely man as the tragically misunderstood hero in his own life?”

This reading always poses the question: what agency do sex workers have in their work? If they train themselves to explicitly cater to male desire as a mode of livelihood, do they not both give men unrealistic expectations of romantic and/or sexual relationships, and lose a sense of self in the process, forging a double alienation. Is their work, in other words, not directly antithetical to healthy and flourishing human relationships?

This is a large question, which the movie is incapable of answering. However, real intimacy in relationships comes up again and again, so perhaps we should explore what the movie may be trying to suggest, even if it doesn’t neatly wrap this all up for us. In K and Joi’s relationship there is a constant tension between real and artificial intimacy. Though K has a lot of affection for Joi, he questions hers, particularly when she tells him that being with him makes her happy. He responds, “You don’t have to say that.” The viewer is left feeling his distrust and his wonder as to how to take compliments from someone whose job it is to make them. More pointedly, we can ask what we are to make of a relationship that is built on the production of fantasy.

While they only hint at this problem in the movie and do nothing to resolve it, they do give us an analogue with which to understand it: that of the memory producer. 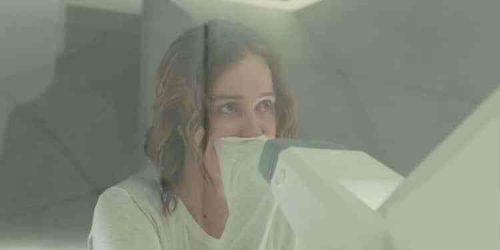 As a replicant, K knows that he did not have a childhood hence he is confused by a reoccurring memory of childhood that seems very real. At one point, he has an interaction with Dr. Ana Stelline, the  most cherished “memory maker” who produces a large number of the memories that are then implanted into the replicants. Out of concern for reality, he asks the Ana if his specific memory is real. She emotionally responds that it is in fact a memory that happened to a real person, while tears run down her eyes. The astute viewer can infer that these are in fact her memories, particularly when she tells K that “there is always a bit of the artist in all of their creations.”

They proceed to have a meta conversation about how she feels about her work producing memories and she displays a rather sophisticated ethic. Indeed, she says that giving people memories ties them to other people in a way that makes them more empathetic and hopeful. That is to say, she understands the service that she provides to be one that allows for humanity to flourish within those who carry her memories. What this implies it that the ontological status of the memory—it’s realness or authenticity—is less important than their very real consequences in the lives who hold them.

What then, does this tell us about K’s relationship to Joi? While Ana produces memories, Joi produces fantasies. If there is an ethic that can be attached to the production of memories, why not the production of fantasies? Do not fantasies also have the ability to be real in their consequences? And, even if they are not a sui generis manifestation of a particular relationship, does this mean that they don’t have a real referent or experiential meaning?

While Joi is a robot who is programmed to respond in a particularly way to K, she is obviously a stand in for a human sex worker, or in other words for a transactional romantic or sexual relationship. I cannot help to think of my own work. Is there an ethic to pretending to be someone’s girlfriend? Does this set up an unrealistic expectation of what a girlfriend is or how one should respond? I ask myself this question in particular when I know that I am standing in for a IRL wife or girlfriend and rehearsing conversations a client hopes to one day have. So often I have thought of my clients’ wives and wondered how they would respond to certain situations, and wondered if I was helping or hurting their relationship. (The fact that outside of sex work I am also a wife makes this all the more pointed to me.)

Emotional labor is morally complicated and there are not simple, universal principles. One positive aspect of this movie is that is doesn’t sugar coat or try to offer easy answers. By writing-off Joi and the relationship that K has with her as artificial, technophobic or feminist critics miss the film’s nuanced eschewal of real/artificial as meaningful or morally significant categories. These boundaries never hold up in practice. Replicants consistently transcend their purpose and go off “baseline.” Similarly, memory makers, fantasy producers, and sex workers all do work that is real in their consequences, even if it is different than the intimacy experienced in non-transactional relationships.

I am able to do this job because, while I do not have established or deep relationships with my clients, I do have them in my personal life. I create fantasies out of the reality of my lived experience, in the way that Ana creates memories out of her history. My clients do the same. Far from being alienating, it is a playspace that allows for new possibilities in our personal lives, once the call is over. While the movie isn’t perfect, many interpretations have failed to appreciate the value of the production of fantasy, or the agency that Joi eventually exerts as a fantasy producer. The movie pushes us to toil with this ambiguity between reality and fantasy, lived and created memory. It invites us, in other words, into an imaginative playscape in which intimacy of different kinds can open new possibilities.

Jessie Sage (@sapiotextual) is an online sex worker, writer, and former academic. Her interests include embodiment, intimacy, the politics of sex and sex work, and reproductive justice. She is co-host of The Peepshow Podcast.