Ron Jeremy, Exxxotica, and Twitter as a Form of Resistance 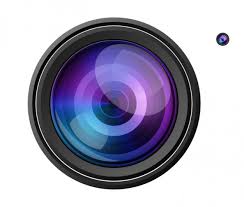 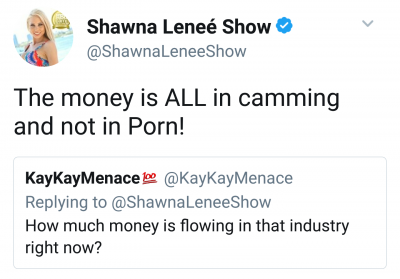 The three day event began Friday. Hundreds of models representing all of the major platforms were there both live broadcasting and interfacing with fans. One of the most visible models, Vera Sky (XBIZ 2017 Cam Girl of the Year) kicked off a heated Twitter discussion on Friday (6/23/17) when she said that she would not return for the second day of the event because fans had assaulted her. In a tweet that was later deleted, she said that she had been groped and that someone pulled her top down and licked her breast. I, too, was at the event and saw that Vera was not alone. I saw numerous models groped by fans seeking pictures without interference from security. Frustrated by the behavior of fans, some models began to discuss whether enough was being done by the event managers, pointed out a lack of clear signage about consent and harassment, then uncovered shocking statements by the Exxxotica owner that seemed to implicitly encourage such behavior. 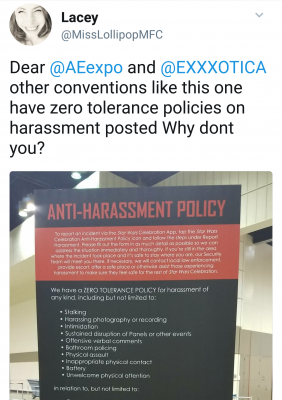 Another important conversation that developed on this Twitter conversation was the presence of Ron Jeremy at the event. Ginger Banks, a cam model, began a thread of women speaking publicly about Jeremy’s assaults against them at Exxxotica events and other events. For example: 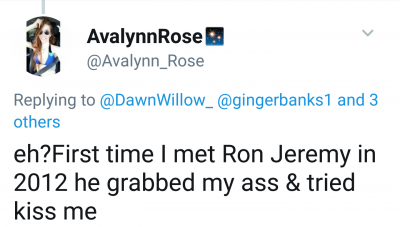 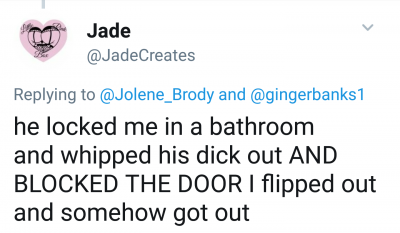 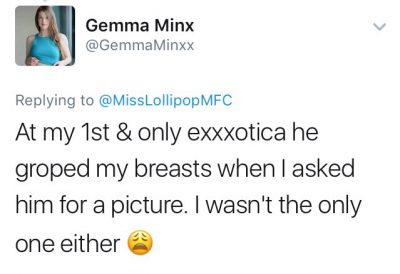 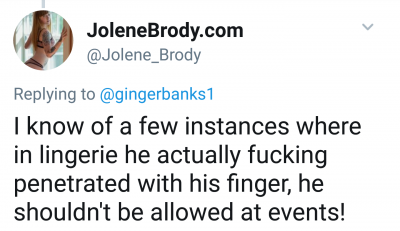 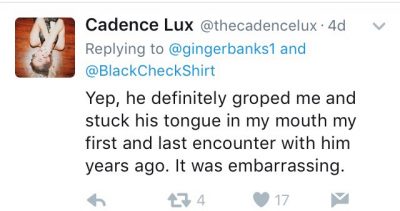 As these stories piled up, a spirit of collective action and solidarity emerged. This particular thread was retweeted 198 times (as of this morning), pushing both the owner of Exxxotica and the industry as a whole to account for its treatment of the women who create content. In fact, many performers, including mainstream performers such as Jessica Drake, demanded a response to the concerns that models were expressing online: 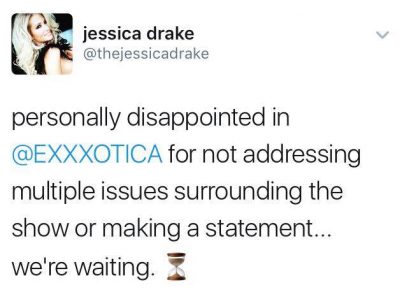 J. Handy did, eventually, issue a lengthy statement in response. However,  myself and others found it to be weak. He claims to not be responsible for the actions of Ron Jeremy or anyone else. He says, “We are not the judge and jury. We are an impartial forum for conversation and discussion about love and sex.” (found on @gingerbanks1, 27 June 2017). 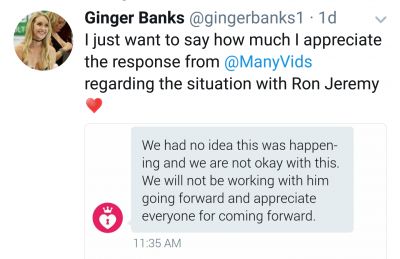 In other words, while the owner of Exxxotica failed to take the webcam models seriously, their protests motivated action by other leaders in the industry. Moreover, it is probably more than coincidence that platforms depending on contributions from independent models are more responsible than figures accustomed to a small group of men deciding what gets produced and distributed.

Jessie Sage @sapiotextual  is a current cam model and former academic. Her interests include female embodiment, intimacy, the politics of sex and sex work, and reproductive justice.