Stop Reinventing Bats: On The State of Electronic Art 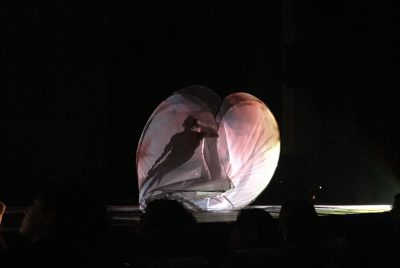 The 23rd International Symposium on Electronic Art was held in collaboration with the 16th Festival Internacional De La Imagen in Manizales, Colombia in mid-June 2017. The opening ceremony for the conference kicked off with a performance by the artist Jaime Del Val, entitled METATOPIA 4.0 – Algoricene (2017), described by the artist as “a nomadic, interactive and performative environment for outdoors and indoors spaces.” The artist statement goes on (and on) to explain that the piece “merges dynamic physical and digital architectures” in an effort to “def[y] prediction and control in the Big Data Era.” In actuality, Del Val stripped down to his naked body, put himself in a clear mesh tent, projected abstract shapes onto the tent, and danced to what might best be called abstract electronica (think dubstep’s “wubwubwub” without the pop).

What piece of what Del Val presented qualifies as “electronic art”? Was it the music? The projector? The use of the term “Big Data Era”, capitalized (in lieu, perhaps, of scare-quotes) in his entirely glib artist statement? I was similarly confused by Alejandro Brianza’s artist talk, “Underground Soundscapes”, in which he showed a few photos of subway systems around the world, accompanied by sound recordings from each visit. About Brianza’s work and Del Val’s, I wondered: why is this electronic art? In fact, throughout the duration of my visit to the ISEA conference and festival, I found myself asking “why” quite often.

To be sure, there were plenty of projects that were quite obviously “electronic”. Bat-bots (2015), for instance, by Daniel Miller, features a pair of bat-like sculptures, complete with echolocation measurement devices and speakers to emit what might be inaudible if you were to walk by an actual bat. Self-proclaimed “sound explorer” Franck Vigroux performed a 45-minute DJ set in front of a Malevitch-inspired white cross, made of “thousands of individual pixels, which explode in space according to the levels of energy of the audio”; the track sounded much the same as Del Val’s musical accompaniment. ISEA, then, was in no shortage of art that is obviously “electronic” in the sense that it had to be plugged in or it used computation as a medium. Still, I could not help but wonder “why” again: why was this even made? Why subject your audience to 45 minutes of the same set of particle physics acting on a simple shape? Why reinvent bats?

ISEA is by no means unique in its ability to attract a congregation of technophilic artists or those intrigued by a mix of science and art. For the past three decades and beyond, organizations like Transmediale, Ars Electronica, and Science Gallery have grown to be major curators of “sciency art” the world over. They operate on mission statements that boast about the interactivity and broad cultural appeal of the work. They throw costly events in major cities around the world and smaller gatherings in satellite venues. Some, like Ars, give out coveted prizes for work deemed superior by a panel of (mostly male) jurors. What they lack, however, is an overt acknowledgement of the political nature of what they are doing. Yes, there is the occasional surveillance detector or VR poverty simulator, but the general excitement that these festivals and the artists showing in them are taking advantage of is a facile equation of “art + science = innovation/truth/the future”.

It seems almost anachronistic to argue for art and politics to be considered necessary partners today. In 1984, artist and critic Lucy Lippard wrote that

It is understood by now that all art is ideological and all art is used politically by the right or the left, with the conscious and unconscious assent of the artist. There is no neutral zone. Artists who remain stubbornly uninformed about the social and emotional effects of their images and their connections to other images outside the art context are most easily manipulated by the prevailing systems of distribution, interpretation, and marketing.

The conservative art critic Hilton Kramer was not so sure, arguing that statements such as “There is no neutral zone” would lead to Lionel Trilling’s “‘eventual acquiescence in tyranny’.” Fifteen years earlier, Kramer, a staunch formalist, watched in horror as Lippard and her Concpetualist peers filled galleries from MoMA to LA’s MOCA with politically charged works of art that often implicated viewers as collaborators in the art. MoMA’s 1970 show, Information, featured Vito Acconci’s Service Area in which the artist had his postal mail forwarded to the museum. “The piece is performed (unawares),” he writes in the show catalogue, “by the postal service…and by the senders of the mail.” The museum guard becomes a “mail guard” and the artist performs the piece by going to pick up his letters. In Hans Haacke’s Poll of MoMA Visitors, the artist asked exhibition visitors to place a ballot in one of two boxes, each answering “yes” or “no” to the question, “Would the fact that Governor Rockefeller has not denounced President Nixon’s Indochina policy be a reason for you not to vote for him in November?”. Haacke didn’t reveal the question until the night before the show opened. This was considered one of the artist’s first “institutional critiques”—works that sought to bring to light the questionable practices of the venue in which they were exhibited (Governor Rockefeller was brother to Nelson, member of the MoMA board, and son to Abigail, founder of the museum).

Kramer was unamused. In a particularly scathing review for the New York Times, he called the show “overweeningly intellectual”, making sure to question the artistic value of the work entirely (“There are more than 150 artists—or ‘artists’—from 15 countries”) before declaring the entire show “egregiously boring.” The critic, it seems, was not willing to consider the conceptual and political meaning behind the work, instead taking jabs at its—gasp!—interactive nature: “I am not sure I can give a very accurate or coherent account of what the visitor to this exhibition is invited to look at, listen to, sit down on, clamber over, go to sleep in, write on, stand in front of, read, and otherwise connect with.”

If, nearly fifty years ago, Kramer was bored because he refused to see the depth of the ideological implications in the art, I am bored because I simply cannot find it. Encontros (2017) features two iPhones, screen-to-screen, one showing a video of the brown waters of the Amazon, the other showing the black waters of the Amazon’s Rio Negra tributary. The site at which the two meet—a place of indigeonous persecution and slavery since the early 1700s—is a marvel of nature, a limnological metaphor of the clash between cultures, one overpowering the other. The artist statement—signed by fifteen individuals—makes no mention of any sort of geopolitical consideration, instead opting to highlight that “the system searches for real-time information in such a way as to reflect changes in the tides and the phases of the moon.” Projects like Encontros not only could be political, they feel like they should be. This begs the question then: do the artists (who, presumably, also write the text to accompany the piece) leave it to me to find the culturally critical element? Is the political in the eye of the beholder?

I would be more inclined to consider this possibility if not for the dearth of ideology-inviting rhetoric in the majority of the programming and literature surrounding each organization’s events. With the notable exception of Transmediale, the mission statements of the festivals in question sprinkle words like “society” and “culture” among pronouncements of the juxtaposition of “Biotechnology and genetic engineering, neurology, robotics, prosthetics and media art” (Ars Electronica) and the ignition of “creativity and discovery where science and art collide” (Science Gallery). Science Gallery, in particular, boasts of turning STEM to STEAM—a dubious cheapening of art in the name of STEM’s focus on education qua employment. In the program’s video appealing to possible funders of “the world’s first university-linked network dedicated to public engagement with science and art”, Luke O’Neill, Director of the Trinity Biomedical Science Institute, declares, “there’s no difference in my mind between an artist and a scientist—we’re all after the truth!” I beg to differ.