Fake News and the Aesthetic of Objectivity 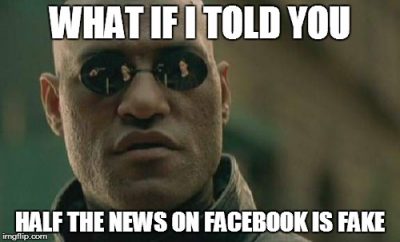 FAKE NEWS. In the aftermath of Trump, we’re finding the term used everywhere. Most recently, the Washington Post suggested that it was time to retire the term, having become so capricious that it hardly meant anything. While typically a fault, this lack of definition has made fake news incredibly compelling to rally against. We don’t need a rigorous definition to understand it sounds Bad. And since the election, “Fake News” has become something of a meme, buzzword and common concern set in our collective subconscious. Two history academic listservs to which I’m subscribed have taken their own turns interrogating fake news, especially interested in separating lazy, bad, or ignorant reporting from news that is deliberately intended to mislead the public.

Regardless of the definition, it’s hardly novel to this election. Papers like the National Enquirer have been around since the early twentieth century. Most arguments for why fake news matters instead typically rely on its digital circulation. So BuzzFeed’s investigative report on fake news concluded that it had more political influence as measured by clicks, shares and comments on Facebook: 8.7 million compared to news outlet’s 7.3 million. The subsequent conclusion has led to dramatic drives for everything from a more educated electorate to direct censorship by our Silicon Valley Lords.

Even if we can’t come to consensus about a definition, we have some sense of where fake news is not found: BuzzFeed’s investigation, for example, listed twenty news sites who are categorized as mainstream with wide circulation. Similarly, New York Times publisher Arthur Sulzberger Jr. reminded us about the mission of his New York Times: “to report America and the world honestly, without fear or favor, striving always to understand and reflect all political perspectives and life experiences in the stories that we bring to you.” Since the election of Trump, MSNBC has been running similar TV spots, in which their claims to comprehensive analysis are paired with close-ups of Trump’s face. Combining intimate access to political celebrities with performances of technical expertise, many of these outlets depict themselves as objective forms of journalistic knowledge. Underlying this objectivity is some platitude about the potential of the truth and good ideas to successfully triumph over all other forms.

Claims towards objective analysis should always be treated with caution. After all, presenting “objective” analysis in a fair manner is what historian Peter Novick termed The Noble Dream. For the most part, media outlets in 2017 offer not an idealized objectivity, but the pragmatic reality of for-profit news coverage. What papers like the New York Times, and The Washington Post, or cable networks like CNN and MSNBC offer might be better termed the aesthetic of objectivity. Such an aesthetic consists often consists of a series of practices designed to cover news objectively, rather than betray a partisan (or moral) perspective. So when white nationalism entered mainstream discourse with Richard Spencer, many networks and papers found space on their panels or pages to discuss white supremacy as an abstract position, rather than invoke a particularly strong refutation.

But because the aesthetic of objectivity is, at heart, a marketing decision, they are beholden to market logic. Attempting to consciously create what media theorists Henry Jenkins, Sam Ford, and Joshua Green termed “spreadable” media means that attempting objectivity can be set aside for the need of clicks and the revenue they generate. Donald Trump–who, if nothing else, is an extraordinary showman–thus became a free pass for quick media commoditization. His tweets are full of typos and unprofessional behavior, which stimulate immense numbers of shares, comments, and likes that simply are not present for substantive analysis of his policies where they exist. His tweets about Hamilton or Meryl Streep often compete successfully for coverage of policy or political actions happening at the same time. Even where attention is successfully kept on a certain specific political concern–for example, Republican efforts to gut the Office of Congressional Ethics–a tweet by Trump receives the credit for what activists organized and people implemented: a massive phone campaign to demand the GOP back down.

If only a couple of journalists came to this conclusion, I would be inclined to view it as accidental; as it is, CNN, The Washington Post, Politico, Bloomberg, Business Insider, NBC, and the New York Times all ran similar coverage on the connection between Trump’s tweet and the GOP retreat. Instead, it seems more likely that coverage that can incorporate Trump’s Twitter presence can rely on more clicks, shares and comments. By safely critiquing the “unprofessional elements” of Trump, this type of coverage can offer some semblance of being against Trump, without offering concrete political responses. The spectacle thus displaces the politics.

While journalism is typically portrayed as always holding power accountable, this is actually a relatively novel perspective on print media. Jurgen Habermas pointed to the rise of periodicals in the seventeenth century primarily as a vehicle for the aristocracy and more affluent merchants and professionals to communicate. The production of the first “public” sphere was not a radical sense of inclusivity, but a development that allowed the literate populations to exploit political and economic changes to their own benefits (Even today in the United Kingdom, some of their most affluent private schools are considered “public” under this definition.) A truly “free” media—the world of pamphlets and printed visuals—often clashed directly with what the prince or religious official of any particular region allowed in circulation. As a result, official or formal vehicles of communication could often–and sometimes were treated by historians–hide as objective analysis of their places and times, despite needing formal approval for circulation.

Politicizing the circulation of fake news has allowed the mainstream media to similarly refute any periodicals or journals that are not household names. So The Washington Post’s investigation of Russia spreading fake news could happily incorporate a source whose method for finding pro-Russian sites was vague to the point that even the Washington Post could be found guilty. In practice, such a definition enabled the grouping of labor and ethnonationalist parties, as though both operated for the purpose of advancing Putin. Despite the shoddy work and the Post’s own retractions atop the page, the article currently sits on 10k shares through Facebook, and certainly has held influence over the DNC’s priorities.

In a year of solid rejection of establishment politics, we might also ask whether the aesthetic of objectivity has been kicked to the curb by consumers of media. From this framework, one immediate conclusion is that people who consume media in their “echo chambers,” on Twitter or Facebook do so intentionally, rather than accidentally. In fact, sources that profess political allegiance often emphasize some rejection of this mainstream aesthetic, whether it is justified in the anti-Semitic conspiracy theories of liberal bias purported by the Right, or rising class solidarity and social organization found on the Left. Given the realization that many political pundits continue to spread their own media despite eighteen months of being wrong about Trump, it may be time to re-evaluate not only how we consume media, but how the mainstream produces it.

Marley-Vincent Lindsey is a doctoral student in history at Brown. He tweets on occasion

[…] via Fake News and the Aesthetic of Objectivity — The Society Pages […]