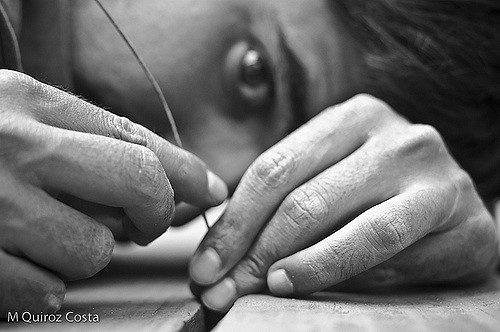 In a widely-shared article on The Intercept, Sam Biddle made the point that, “Trump’s anti-civil liberty agenda, half-baked and vague as it is, would largely be an engineering project, one that would almost certainly rely on some help from the private sector.” The center of his article, that of the six major tech companies he requested comments from only Twitter gave him an unequivocal statement that they would not help build a Muslim database, was chilling even though most of the companies just never responded. The role of engineers and designers in carrying out political ends often relegated to business’s policies. That is, engineers themselves are seen as completely beholden to whatever their bosses decide their job should be. I want to look at this from a different angle: why are engineers so willing to defer responsibility for their actions and why are they so often in positions to do so?

Simply put, border security doesn’t happen without engineers willing to build the walls or design the drones that make up that border. If, as the oft repeated Bruno Latour quote goes, technology is society made durable, we should be paying attention to (and putting a lot more pressure on) who is choosing which parts of social life persist without direct, constant human intervention. Making sure that companies behave ethically is one strategy but we should also look at how engineers themselves are trained to deal with morally dubious projects. Many of the academics who study engineering pedagogy and the accreditation bodies that oversee engineering programs have come to the conclusion that not only are engineers not given the necessary skills to navigate social and political conundrums, they are primed to follow orders regardless of their moral outcome.

Gambetta and Hertog’s reasoning for this phenomenon is based in political psychology: both engineers and right-wing extremists put considerable emphasis on hierarchy, order, clear boundaries between categories, and unchanging conditions. The personalities that choose right-wing extremism and engineering overlap considerably. Of course, every engineer is not a nazi, but we should never lose site of the numerical fact that engineers were over-represented in nearly every right-wing revolution of the past century: from 1970s Iran to 1920s Germany. It is unclear from their book whether their discovery is due to self-selection into engineering and fundamentalist groups or if engineering pedagogy primes people to accept right-wing extremism. In other words, the jury is still out as to whether this is a matter of correlation or causation, but there is some evidence to support the latter.

Embedded not just in our existing gadgetry but in the very methods and processes that design and build new ones, are very specific ideological valences. This goes as far back as Newton’s Principia where the very foundations of calculus were laid out in such a way to be directly beneficial to engineers building warships. Engineering, as social scientists Dean Nieusma and Ethan Blue like to say, has always been a war-built discipline. From the sorts of organizations engineers are trained to work in (very hierarchical ones) to their professional ethics (the customer/employer/contractor is always right), they are taught unquestioning deference to authority and unremitting neutrality towards issues of political consequence.

Some who study engineering pedagogy and professional development make strong arguments for including peace and justice in college curriculums. Some have gone so far as to build an alternative “shadow code” for engineering departments willing to build social justice into their lessons. Education scholar Michael Lachney and I, in our contribution to this shadow code, have suggested that engineers become fluent in the differences between violence and property destruction.

Imagine if medical doctors, instead of taking the Hippocratic Oath that says, in part, “do no harm”, instead took an oath to never knowingly expose their employer to malpractice suits? No one, patients included, wants to be involved in malpractice but the change in allegiance should be clear: we want doctors to be first and foremost concerned with their patients’ well-being and their hosting institutions should be directed toward supporting that concern. Why should engineers be any different? Why are there no oaths to build things that cause harm to fellow humans? Why are there no licenses to be revoked if an engineer knowingly and consistently builds things that do great harm? These seem like common sense requests until you look at the major employers of engineering graduates: military contractors, resource extraction companies, and the governments that own those militaries and resources.

A new society needs a new kind of engineer. One who would recognize that designing a prison is not unlike designing a building with no foundation. Both are a kind of malpractice: building something that has been shown time and time again to produce bad outcomes. Engineers must understand their impact on society as well as they know Java or the tensile strength of concrete. That way, when they are told to build that wall or compile that database, they at least have a professional set of standards they can hold up as antithetical to their assigned project.

Just wanted to point out there are licenses that can be revoked if an engineer knowingly builds a dangerous structure. Granted the licensing focuses on public use structures, buildings, bridges, etc. It still exists. Look into Professional Engineering or PE licences, they are typically self imposed at the state level but if I recall from my engineering ethics class there is some national level requirements as well. Other than that caveat, great article!