The Normalization of Dissent, or: Mr. Pence goes to Hamilton

On Friday night, VP-elect Mike Pence went to see Hamilton. He was loudly booed. The cast delivered a respectful message asking him to “work on behalf of all of us”. President-elect and noted internet troll Donald Trump accused the cast of harassment, because the truth is whatever he says it is. By Saturday morning, it was – going by my feed – most of what Twitter was talking about.

So far I’m sure I’m not delivering any information that anyone reading this doesn’t already know. What was especially noteworthy about what happened – aside from the fact that it happened at all – was the timing. Specifically, it happened almost immediately after Trump settled a fraud lawsuit for $25 million, after trying to delay it until after the Inauguration. People had been talking about that, but suddenly it was largely submerged under Hamilton tweets. Which didn’t go unnoticed. 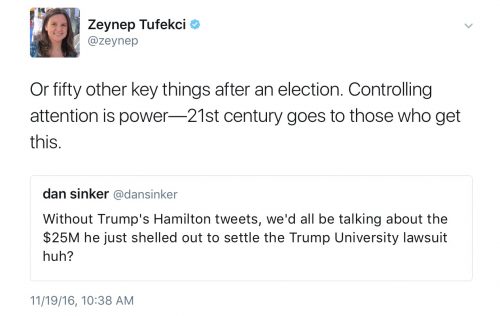 The point is impossible to argue. That’s exactly what happened. And it’s definitely disturbing; Pence getting booed at Hamilton is arguably both a more spectacular event and an event with significantly less legal and ethical importance. In fact, since then – and I’m sure I’m not alone in considering this – I’ve wondered if it wasn’t calculated. It seems like something tailored specifically for social media: take a despised political figure (also a virulent misogynist and dangerous homophobe, among many other things), put him in the audience of a massively popular musical where 90% of the audience plus the cast is pretty much guaranteed to dislike him, add smartphones, and hit purée.

Meanwhile, the President-elect’s generally unambiguous criminal activity – and his avoidance of a court appearance – slides under the radar.

Regardless of exactly how this happened, like I said, I’m disturbed by it and by its implications. Because if there’s one thing these people do understand, it’s how to manage a news cycle. I think we need to be watching for exactly this kind of thing, because I don’t think we’ve seen the last of it. This is a President-elect who genuinely appears to be under the impression that this is in fact all a reality show (is he even wrong? experts disagree), and he’s being advised by at least one man who knows how to leverage spectacle and manipulate an audience. This is a tactic that is likely to be effective as a distraction measure. It’s dangerous.

Does that mean we shouldn’t have been talking about it?

No. We should. What happened on Friday night should be talked about – only not because it’s fun to be clever on the internet (it is) or because these men are easy to mock (they are). It deserves our attention because it’s yet another way to emphasize and underline the fact that this is not normal. 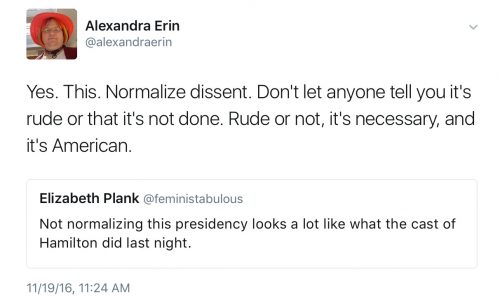 Those of us who want to fight what’s happening, those of us who want to dissent, we need to do it with every single tool we can get our hands on, and the normalization of this entire situation is one of the biggest dangers right now. Normalization paves the way for much, much worse. A normal VP-elect goes to a Broadway show, and maybe a few people heckle, but hey, that’s normal. What happened on Friday night was not normal, and everyone saw it, or heard about it, and everyone knew.

Regardless of how much Trump wants to lie about how it really went down.

This is going to be one of the major sites of contention over the course of the next four years, and it’s not new but it’s going to be of unprecedented importance: not the details of what happens, but how they’re used. Not that a spectacle occurs, but what it ends up meaning. Because that’s one of the fights we’re looking at in a post-truth environment. Not what happened, but instead: What does this mean?

It’s abstract. It’s also not. It’s about as meaningful as you can get.

This is the machine, in a courtroom (or not) and in the audience of a Broadway musical. It’s not here or there; it’s everywhere. We can’t afford to focus too much of our attention in any one place, on any one front; we also can’t afford to ignore any of the tools we can use.

This is the machine. Grab every wrench you can, and throw.