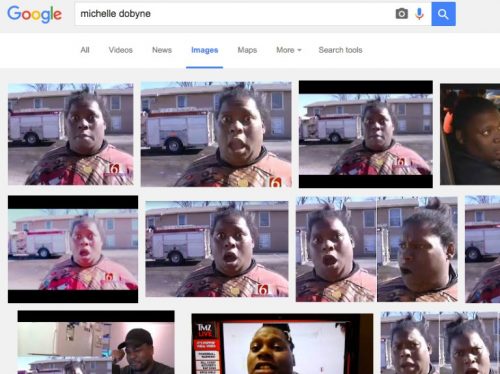 Some time ago, I spoke with a reporter regarding the Internet virality of Michelle Dobyne of “ain’t nobody got time for that” fame. They intended to run a ‘where are they now’ follow-up piece on Dobyne’s life post ’15 minutes of fame’. In the end, the TV clip and its companion article condensed our 8-minute interview into these anonymous soundbites:

“We asked a noted social media expert what makes a video viral worthy. She said catch phrases and exoticism, something that takes us away from our routine lives.”

“Our expert said what Dobyne and other viral video stars are able to do long term with their 15 minutes of fame is anyone’s guess.”

Since much of what I had to say about eyewitness virality, racism, and journalistic responsibility did not make the final cut, I later transcribed my conversation with the reporter and wrote it up.

In January 2016, Michelle Dobyne gave an eyewitness account after her apartment complex caught fire. In the original interview, her catchphrase “Nuh-uh, we ain’t gon be in no fire. Not today.” and her overall decorum caught the attention of the television crew, who then put the clip up on Facebook. And well, you know the formula. The clip went viral. Dobyne became a meme. Romantic and commercial offers were rumoured. Semi-officious merchandise became available.

Three months later, the news network decided to run a follow-up piece on Dobyne. As it turns out, not much of her material circumstances have changed despite her transient internet fame. Rinse and repeat. The saving grace? Kind strangers started a gofundme page for Dobyne. The backlash? Her neighbours feel “overshadowed” by her fame and are still struggling post-fire.

I am going to call this phenomenon “eyewitness virality”: The proliferation of television news interviewees, many of whom are themselves victims of the unfortunate event being covered, who attain overnight but transient fame through the news networks who curate and disseminate their eyewitness accounts on social media as humour and clickbait.

But Dobyne is just the latest addition to a string of eyewitness viral stars:

April 2012: Kimberly “ain’t nobody got time for that” Wilkins aka Sweet Brown, who gave an eyewitness account after her building complex caught fire. (Dental care advertorial here, movie cameo here).

These eyewitness viral stars are all Black. However, I also recall this eyewitness account from a Portland woman who went off tangent and told reporters a “vacuum cleaner guy” has “seen my tits”. Unfortunately, the original video has been taken down and I was unable to locate any news reports from official sources.

The reporter I spoke to asked about the ‘formula’ for internet virality.

“Tell me a bit about the whole viral video and social media.. what is it in a video that makes it go viral? What does society want to see that makes it get all these clicks?”

1) Unexpected responses. Viewers usually do not expect these eyewitness accounts to be so casual, light-hearted, humorous, or to some extent, flippant. Their body language, tone, and vocabulary may seem peculiar when juxtaposed against the severity of the situation, because viewers may not feel the interviewees are expressing grief in “normative” ways (i.e. crying). But this is not to say we should discount their grief.

2) Catchphrases. With eyewitness virality, catchphrases that gain traction and circulate as memes have been those based on stereotypes of how we perceive people who look a certain way to say certain things (i.e. race and parlance, class and street talk, sexuality and flamboyance).

3) Exoticism. Viewers tend to exercising a sense of distance from the eyewitnesses they see on screen. Perhaps we do not share in their plight, their poverty, their general precarity, or their demographic and associated identity markers (i.e. vocabulary, accents, posture). It is easy to meme the exotic when we project our partial understandings/misconceptions onto caricatures.

The follow-up clip/article for which I was interviewed seemed to pitch a feel-good tone that highlighted four things:

1) The reporters did not expect the clip to go viral.

2) Dobyne’s reactions in the original news clip were authentic.

3) Dobyne and her family have experienced positive (fun, merchandising, marriage proposals, potential career in comedy) and negative (failed managerial relationship) consequences as a result of her viral fame.

4) Nevertheless, Dobyne wishes to use her fame for positive ends (raise awareness for domestic violence and homelessness).

This is despite the racist overtones of such virality. A handful of op-eds have alluded to this:

The Guardian calls such incidents “lowbrow entertainment trenches” that “trade on stereotypes”, that cost some “dignity” in the vein of “Poor People Say the Darndest Things”.

The Huffington Post asks if viewers are laughing with Dobyne, or at Dobyne as “a separate, autonomous entity or as a stereotype — the archetypal loud, ratchet, uneducated black woman”.

This Blogher writer appeals to readers with her own demographic (she is a White woman married to a Black man) and tells them Dobyne “does not represent the Black people I know”. She also seems to think Dobyne was intentionally capitalizing on racial stereotypes for fame, and expresses her disdain.

Salon calls these formulaic routines the “memeification and autotuning of news interviews with poor and working-class people”, and denounces “society’s collective urge to gawk at the poor and working class”.

The reporter I spoke to asked about the ‘authenticity’ of Dobyne’s reactions.

“What do you think it was about Michelle exactly that caught so many peoples’ attention? A lot of people thought she was faking it, but I met her afterwards and she’s just got a personality like that. Within the first fifteen minutes it was already blowing up on our Facebook page.”

Dobyne was obviously responding to a moment of grief in a manner that was very lighthearted, but we also know that people tend to deal with grief in different ways. A lot of times, for the people who are steeped in poverty or who are used to living a life of precarity where unfortunate incidents happen often, humour is a coping mechanism to cope with their circumstances. We viewers who are safe behind the screens, who are not experiencing poverty or troubles firsthand, may not understand that. We may not understand humour as a coping mechanism or as daily parlance.

Worst still, some of us may mistake this humour as an intentional act to play up one’s ‘five seconds of fame’ on TV. I saw this a lot on the YouTube comments on several incarnations of Dobyne’s interview. Almost every video had dozens of people commenting to the effect of “She’s obviously copying from Sweet Brown”, “She’s following a trope”, “She’s playing up herself to gain some type of fandom or celebrity”. This is quite worrying. Just because we are familiar with one eyewitness viral star being memoralized in a particular light (i.e. Sweet Brown), we assess all other Black people or Black women who are in the same predicament, and make judgements on whether they can or cannot express themselves in a similar manner. And then we attach this to moral values of authenticity.

Dobyne’s interview clip was originally shared on Facebook by a reporter on 11 January 2016, with the caption (as of 5 April 2016):

“You never know who you will run into covering the news of the day. News On 6 photojournalist Ethan Pierce met a lady named Michelle Dobyne this morning. Her description of a fire at the Casa Linda Apartments…is incredible.”

The clip was than reposted on another reporter’s Facebook page on the same day, with the caption (as of 5 April 2016, emphasis mine):

“Everyone, meet Michelle Dobyne, who is my new favorite person in the entire world. She and her family have to find a place to live for the next few days after an apartment fire hit their complex, but she still found humor in the situation and she is SO FUNNY. Charlie Hannema News On 6 and I can’t stop laughing at her interview with News On 6 Photojournalist Ethan Pierce. Thanks Michelle, you are an awesome woman!”

I find these initial Facebook shares and captions to be a contradiction to the follow-up clip/article’s claim that the reporters did not expect the clip to go viral, since:

1) The caption clearly framed the clip as humour bait, and Dobyne as a larger-than-life personality.

3) Other news networks have previously pioneered such known formulaic curations of eyewitness virality.

The first reporter’s follow-up Facebook post on 12 January 2016 was perhaps the saving grace, informing viewers than Dobyne was “sleeping in her car” and calling for “cards, clothes for the kids or cash/checks” donations for Dobyne and her family. He ends off: “Hopefully, Michelle’s spirit during the struggles can be a message to people around the world.”

The reporter I spoke to asked about the backlash to such instant virality.

“Michelle says that this ‘fifteen minutes of fame’, if you will… some people came out of the woodwork good and bad. So what comes with this quick rise to fame for somebody who may not be ready for it or who may not expect it?”

The eyewitness viral stars themselves might have ideas about how they want to manage this sudden fame and commerce, and the opportunity to perhaps better their life standing. Many op-eds I’ve read suggest we are giving these viral stars a ‘lifeline’ by helping them to cash in on their fame.

But once the glitz and glamour wears out, once all these press interviews die down, once Dobyne stops being a meme, once she’s no longer the star of a viral news item, what’s there to make of her livelihood and state after this? We seldom know how such viral stars are doing once you’ve capitalized on their instant fame for clicks on your news articles or for internet laughs.

“Very interesting. Well anything else stood out to you about Michelle? She does say that she wants us to use it as a platform to talk about things she’s gone through, such as domestic violence and homelessness, but is there anything else the public should take away from this ‘becoming famous with just one Facebook post’ trend? What else do you want to say?”

I see a lot of commentary about how we have discomfort speaking about Dobyne and racism – is it alright to laugh at her, is it not? – but when I first saw her video I was immediately reminded of a clip in ‘Dude, Where’s My Car‘, where two hungover, high (?) White men were speaking to each other and repeatedly saying “Dude”, “Sweet”, “Dude”, “Sweet”. But when viewers see this caricature on cinema screens, we probably don’t believe there are actuallypeople ‘in real life’ who speak like this, like what my students would call ‘White girl trash talk’. We don’t see ‘real life examples’ of these folks on screen.

I was also concerned about how this video was made public. In the news interviews, it was stated that the TV crew themselves had a really good laugh and then decided to put the clip on the internet. Here, we need to consider journalistic responsibility. These eyewitness viral stars, they don’t become memes all by themselves. A lot of the gatekeeping happens in your press room, and I think the journalists have the responsibility to help such viral stars negotiate their instant visibility and celebrity, and manage things such as consent.

Dr Crystal Abidin is an anthropologist and an ethnographer. Reach her at wishcrys.com and @wishcrys. This post was first published here.