Getting Inside the Apparatus at XOXO Fest 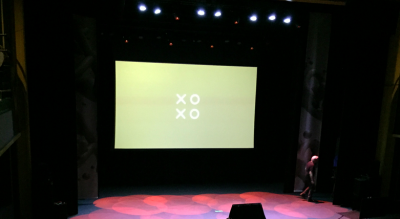 Vilem Flusser’s work is still rather obscure in English language academic circles. Only a handful of major works from the media philosopher have been translated from his native German or adopted Portugese, and even that was only in the past two decades, well after his death in a car accident in 1991. While teaching MFA students, I found Flusser’s The Shape of Things, a collection of essays on design, to be extremely helpful when seeking to define some basic terms (for instance, the word “design” itself). But in my own work considering our technologically mediated world, I found 1983’s Towards of Philosophy of Photography a critical read.

In the book (at 94 pages, it feels more like a long essay), Flusser uses his familiar footnote- and citation-less conversational prose to present “an attempt to sum up the essential quality of photography” (76). Of most use to us here is the theorist’s apparatus, a conceptualization of the power programmed into a consumer device (e.g., a camera) by the individuals who design, build, sell, and distribute the technology. Of those who program the apparatus, Flusser writes that “their intention is not to change the world but to change the meaning of the world” (25). Photographers, under the impression that they are controlling the camera through its various settings and functions, are actually falling in line to the predetermined routines determined by the apparatus’s programmers. As an artist and educator, I’m always looking for ways to best elucidate Flusser’s apparatus concept, especially through “real world” examples. Earlier this month, I had the privilege of visiting a conference in which the apparatus and its programmers were an ever-present theme.

Started in 2012 as a Kickstarter project, XOXO Festival is billed as “an experimental festival celebrating independent artists who work on the internet.” Each year, festival co-founder and speaker-curator, Andy Baio, invites an eclectic group of  YouTubers, podcasters, game designers, comedians, and more to speak to a crowd that, this year, reached over 1,000 strong. The conference, which takes place in Portland, Oregon, can feel almost too zeitgeisty at times (the food truck featuring pajama-laden servers dispensing cereal was, to its credit, quite popular), but the conspicuous lack of corporate logos and startup slinging pitch-men makes it harder to admit I was ever jealous of those who attended SXSW when I was stuck at home.

That’s not to say that those who spoke at the most recent festival are not busy thinking about money, intellectual property, contracts, freelance rates, and all of the other financially-focused stresses that “internet creators” face. On the contrary, some of the most powerful presentations were from artists like Gaby Dunn, comedian and YouTuber, whose project, “Just Between Us”, may lose all ad revenue going forward due to a subject-matter which YouTube might deem “non-advertising-friendly content”—this, after Dunn is already dealing with her previous employer, BuzzFeed, continuing to use her likeness in promotional and site material after she left because her contract stated she could not do any non-BuzzFeed-related work. Later in the day, cartoonist David Rees showed slide after slide detailing his freelance revenue sources over the past decade. The next morning, we heard from Esra’a Al Shafei, Bahraini civil rights advocate building platforms for voices of the underrepresented.

In recent years, it has percolated into popular culture that the devices and services we depend on daily may not be nearly as mystical as the marketing and hype surrounding them would have us believe. See, for example, the “there is no cloud, just someone else’s computer” trope, or the decidedly more somber tales of suicide out of the factories in which human beings assemble our phones under inhumane conditions. These are, in effect, evidence of the apparatus at work, changing the meaning of our world through the programming of our tools.

XOXO stood as a rare opportunity for those inside the apparatus to share their experiences. At this conference, you were constantly reminded that “the internet” is not just a bunch of “someone else’s computers” or even just rows of cabinets in a warehouse in North Carolina or Washington State. The internet apparatus, at the risk of sounding like a Stanley Greenberg screenplay, is people. Even as someone who has developed plenty of work for the web, hearing from those who have engaged in meaningful relationship-building, power struggles, self-exploration, and even just a bunch of tomfoolery online felt like blinders were being removed and I could see the power relationships that had been present all along.

Flusser—as oversimplified as the apparatus may seem—provides an accessible and apt introduction to power dynamics in our technologically mediated world. The apparatus speaks to a programming, but doesn’t force us to consider a top or bottom, an above or below. This is extremely helpful when the entropic nature of forces of influence within the creative industries (and the rhetoric therein) confuse us to the point of believing we are the ones in charge of our “user generated content”, our “online selves”, our “personal brands”, etc.

The founders and organizers of XOXO have already promised a hiatus in 2017 and are unsure if the event will ever return, so I feel fortunate to have attended even one of the conferences. For now, I hope “online creators” can use the community built around the festival and its inevitable off-shoots to keep reminding one another that the apparatus is a heavily programmed force. At the end of Towards A Philosophy, Flusser argues that the apparatus might be counter-programmed—that we might be able to figure out ways to use it that break the prescriptions of the programmer. I can’t say I see that as a distinct possibility, at least not within our current landscape. But five years’ worth of healthy audiences and insightful presenters, all working in spite of the apparatus, is perhaps a glimmer of hope.

Gabi Schaffzin is a PhD student in Visual Arts at the University of California, San Diego. He is rarely this optimistic, made evident by his Twitter timeline or website.