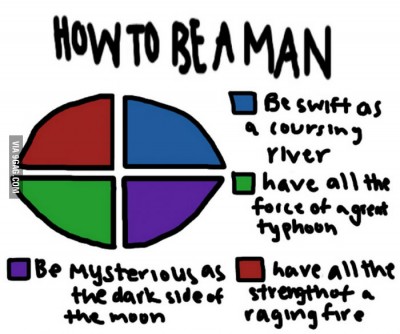 “How did people learn to do anything before the internet?” I say to myself as I peer over a recipe for cheddar zucchini muffins on my iPad. The fact that those muffins turned out terribly doesn’t negate the point though: The internet is the biggest training manual in history, and we use it to muddle through everything from broken door knobs to wine-stained pants to tough break ups. We also use it to learn how to be a particular type of person: successful, organized, sexy, friendly, assertive, and the list goes on. But one of the biggest demographics for the online-training manual market is men learning how to be men. A specific kind of man. The kind who can talk to a woman wearing headphones.

It’s impossible to find a “beginning” to the contemporary landscape of training guides on manliness; even in the 16th century texts like The Book of the Courtier and The Book of the Governor were laying the groundwork for today’s self-help discourse. At the turn of the 20th century, ideals of masculinity were become more firmly rooted in a muscular physique, and figures like Eugene Sandow, the father of modern body building, published training manuals that taught both physical exercises and a moralizing notion of man-as-body.

By the 1960s and 70s, literature on “being a man” was exploding, both as a part of and a response to feminist movement. Writers in the men’s liberation movement were arguing that patriarchal relations and “traditional masculinity” harmed men, and called on a new type of manhood that sought internal satisfaction through experiencing a fuller range of emotions. Raewyn Connell documents these early beginnings of masculinity politics over the last 50 years, noting that the “masculinity therapy” movement “was at first close to feminism” but by the 1980s became more oriented toward restoring “a masculinity thought to have been lost or damaged by recent social change” [see Connell’s Masculinities 2nd ed, 204-220].

The 1980s saw the rise of the mythopoetic men’s movement, which sought to find a means of “returning” to an essential masculism that had been lost in the modern era. Factors like workplace competition, rather than masculine bonding; excessive time at home with women; the “muting” of men’s voices by feminism; the emotional damage incurred by lack of fatherly bonding; and men’s inability to freely express their feelings were tackled by the mythopoetic men’s movement. Books, workshops, gatherings, rituals, and storytelling all became devices for the expression of a new kind of man, or really the rediscovery of some presumed “deep man” who had been lost.

All of these historical elements of men’s movements and their accompanying training guides continue to influence the contemporary landscape of men’s self-help, but by the 2000s a relatively novel factor was introduced. Pick up artistry was now a booming industry, with Neil Strauss’ The Game becoming a best seller, and subsequent publications laying out in great detail the tools and tactics for getting laid. Today, the internet is flush with blogs, YouTube channels, and forums where young men turn to learn how to be a man. A particular type of man. A man who gets laid.

The flurry over the recent how-to guide on talking to women wearing headphones is an opportunity to historicize this phenomenon and take stock of how influential it is on the contemporary gender order. All across the internet men are seeking each other out to learn how to talk to women in all sorts of environments and under any and all conditions: in bars, on the train, in the office, at church…

These outlets take two predominant forms: profit generating and community-based. The first characterizes Modern Man, the site that published the headphone-conquering how-to guide. Pay-based models for training promise results through membership and access to videos, books, and other guides, and Modern Man even includes a testimonial page to demonstrate to customers that they too can reap the rewards of purchasing access to guides. There are also ad-based models on blogs and YouTube channels, wherein practitioners can support themselves without directly selling the product to customers.

Others are simply labors of love: free communities where the majority of the content is generated and managed by people working for free. Pick-up artistry community boards and various subreddits devoted to dating and marriage advice vary widely in terms of what tactics men might use to be successful with women. Some are fairly straightforward and applicable in all arenas of social engagement: stand up straight, dress in a way that flatters your body type, make eye contact, etc. Others are more complex, often based in popular conceptions of biological essentialism.

Why people form communities online that are often incredibly time-intensive and unpaid is an important question for contemporary internet scholarship. In Personal Connections in the Digital Age, Nancy Baym lays out a number of reasons why people find community online so satisfying and, as such, worth investing in. People find belonging online by developing shared practices, sharing resources and support, and developing common identities that, in many cases, can be difficult to cultivate in offline environments. All of these factors play an important role in the origin and development of masculist online communities, whether they be feminist-oriented man’s liberation groups or non- and anti-feminist movements that seek to subvert or, at least, take account of women’s sexual liberation and develop new strategies for convincing women to have sex with them.

One thing that all of these entities—whether communities or business enterprises—have in common is the how-to guide format. Self-help is a $10 billion industry, and has so infiltrated identity formation in neoliberal capitalist societies that its presence often goes unremarked in everyday examples like the headphone essay. At the heart of self-help is cultivating and projecting self-confidence, and this is doubly true for outlets training men to pick up women. A central tenet of contemporary masculist pedagogy is confidence.

Which begs the question: where did this come from?

Confidence is more central to today’s masculist discourse than at any point in the history given above. This suggests that confidence is understood as the key to successful romantic interactions, but also that men have lost confidence somehow, and that it must be rebuilt.

The problem of confidence isn’t limited to masculist discourse. Companies hire self-help gurus to workshop with employees to create more efficient and profitable businesses. People pay thousands of dollars to attend week-long seminars to learn how to unlock their potential by cultivating a powerful sense of self. But the forces that have led to this loss of confidence and the need to regain it are manifold.

I propose two, though countless others likely exist. The first is precarity. Author Susan Faludi has documented extensively how upheavals in the industrial workforce and the loss of traditionally “manly” jobs have led countless men to lose their sense of self and their belief that they can contribute anything of value to society. Key symbols of status and stability such as home ownership and lifelong employment at a company have greatly diminished in the last few decades. Tracing a predictable life trajectory is increasingly difficult in the new economy.

Second, the advertising industry depends on a consumer base that feels the need to purchase products that will make them more attractive, more successful, and more whole. From deodorant to whiskey to floor cleaners, advertisers promise their products will make us better mothers, better business executives, and of course, better men.

Learning to do something that, frankly, you just shouldn’t do, with the aim of getting laid is a massive element in the internet-as-self-help reality that characterizes so much of daily life. This key aspect of the internet intersects with the changing gender regime, the prominence of “confidence” discourse, community building, affective labor, and for-profit models of content generation. This short, pretty annoying essay about ignoring whether or not a woman wants to talk to you and “being confident” that you can change her mind is part of a much bigger system of discourses that needs to be peeled apart, historicized, and contextualized.

Also, maybe we need new headphones that come with big blinking signs that say “leave me alone, I’m listening to a podcast and drinking coffee and I’m not here to validate you.” Or something like that.