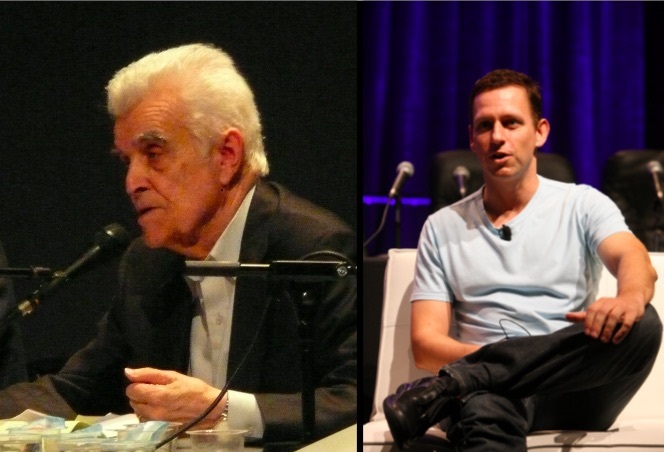 During the week of July 12, 2004, a group of scholars gathered at Stanford University, as one participant reported, “to discuss current affairs in a leisurely way with [Stanford emeritus professor] René Girard.” The proceedings were later published as the book Politics and Apocalypse. At first glance, the symposium resembled many others held at American universities in the early 2000s: the talks proceeded from the premise that “the events of Sept. 11, 2001 demand a reexamination of the foundations of modern politics.” The speakers enlisted various theoretical perspectives to facilitate that reexamination, with a focus on how the religious concept of apocalypse might illuminate the secular crisis of the post-9/11 world.

As one examines the list of participants, one name stands out: Peter Thiel, not, like the rest, a university professor, but (at the time) the President of Clarium Capital. In 2011, the New Yorker called Thiel “the world’s most successful technology investor”; he has also been described, admiringly, as a “philosopher-CEO.” More recently, Thiel has been at the center of a media firestorm for his role in bankrolling Hulk Hogan’s lawsuit against Gawker, which outed Thiel as gay in 2007 and whose journalists he has described as “terrorists.” He has also garnered some headlines for standing as a delegate for Donald Trump, whose strongman populism seems an odd fit for Thiel’s highbrow libertarianism; he recently reinforced his support for Trump with a speech at the Republican National Convention. Both episodes reflect Thiel’s longstanding conviction that Silicon Valley entrepreneurs should use their wealth to exercise power and reshape society. But to what ends? Thiel’s participation in the 2004 Stanford symposium offers some clues.

Thiel’s connection to the late René Girard, his former teacher at Stanford, is well known but poorly understood. Most accounts of the Girard-Thiel connection have described the common ground between them as “conservatism,” but this oversimplifies the matter. Girard, a French Catholic pacifist, would have likely found little common ground with most Trump delegates. While aspects of his thinking could be described as conservative, he also described himself as an advocate of “a more reasonable, renewed ideology of liberalism and progress.” Nevertheless, as the Politics and Apocalypse symposium reveals, Thiel and Girard both believe that “Western political philosophy can no longer cope with our world of global violence.” “The Straussian Moment,” Thiel’s contribution to the conference, seeks common ground between Girard’s mimetic theory of human social life – to which I will return shortly – and the work of two right-wing, anti-democratic political philosophers who were in vogue in the years following 9/11: Leo Strauss, a cult figure in some conservative circles, and a guru to some members of the Bush administration; and Carl Schmitt, a onetime Nazi who has nevertheless been influential among academics of both the right and the left. Thiel notes that Girard, Strauss, and Schmitt, despite various differences, share a conviction that “the whole issue of human violence has been whitewashed away by the Enlightenment.” His dense and wide-ranging essay draws from their writings an analysis of the failure of modern secular politics to contend with the foundational role of violence in the social order.

Thiel’s intellectual debt to Girard’s theories has a surprising relevance to some of his most prominent investments. For anyone who has followed Thiel’s career, the summer of 2004 – the summer when the “Politics and Apocalypse” symposium at Stanford took place – should be a familiar period. About a month afterward, in August, Thiel made his crucial $500,000 angel investment in Facebook, the first outside funding for what was then a little-known startup. In most accounts of Facebook’s breakthrough from dormroom project to social media empire (including that offered by the film The Social Network), Thiel plays a decisive role: a well-connected tech industry figure, he provided Zuckerberg et al, then Silicon Valley newcomers, with credibility as well as cash at a key juncture. What made Thiel see the potential of Facebook before anyone else? We find his answer in an obituary for René Girard (who died in November 2015), which reports that Thiel “credits Girard with inspiring him to switch careers and become an early, and well-rewarded, investor in Facebook.” It was the French academic’s mimetic theory, he claims, that allowed him to foresee the company’s success: “[Thiel] gave Facebook its first $500,000 investment, he said, because he saw Professor Girard’s theories being validated in the concept of social media. ‘Facebook first spread by word of mouth, and it’s about word of mouth, so it’s doubly mimetic,’ he said. ‘Social media proved to be more important than it looked, because it’s about our natures.'” On the basis of such statements, business analyst and Thiel admirer Arnaud Auger has gone so far as to call Girard “the godfather of the ‘like’ button.”

In order to make sense of how Girard informed Thiel’s investment in Facebook, but also how he has shaped Thiel’s ideas about violence, we need to examine the basic tenets of Girard’s thought. Mimetic theory has not been widely applied in social analyses of the internet, perhaps in part because Girard himself had essentially nothing to say about technology in his published oeuvre. Yet the omission is surprising given mimetic theory’s superficial resemblance to the more often discussed “meme theory,” which similarly posits imitation as the basis of culture. Meme theory began with Richard Dawkins’s The Selfish Gene, was codified in Susan Blackmore’s The Meme Machine, and has been applied broadly, in popular and scholarly contexts, to varied internet phenomena. Indeed, the traction achieved by the term “meme” has made most of us witting or unwitting adopters of meme theory. Yet as Matthew Taylor has argued, Girard’s account of mimeticism has significant theoretical advantages over Dawkins-derived meme theory, at least for anyone interested in making sense of the socio-political dimensions of technology. Meme theory tends to reify memes, separating them from the social contexts in which their circulation is embedded. Girard, in contrast, situates imitative behaviors within a general social theory of desire.

Girard’s theory of mimetic desire is simple in its basic framework but has permitted complex, detailed analyses of a wide range of cultural and social phenomena. For Girard, what distinguishes desire from instinct is its mediated form: put simply, we desire things because others desire them. There is some continuity with familiar strands of psychoanalytic theory here. I quote, for example, from Slavoj Žižek: “The problem is, how do we know what we desire? There is nothing spontaneous, nothing natural, about human desires. Our desires are artificial. We have to be taught to desire.” Compare this with Girard’s statement: “Man is the creature who does not know what to desire, and who turns to others in order to make up his mind. We desire what others desire because we imitate their desires.” For Girard (and here he differs from psychoanalysis), mimesis is the process by which we learn how and what to desire. Any subject’s desire, he argues, is based on that of another subject who functions as a model, or “mediator.” Hence, as he first asserted in his book Deceit, Desire, and the Novel, the structure of desire is triangular, incorporating not only a subject and an object, but also, and more crucially, another subject who models any subject’s desire. Moreover, for Girard, the relation to the object of desire is secondary to the relation between the two desiring subjects – which can eclipse the object, reducing it to the status of a prop or pretext.

The possible applications of this thinking to social media in particular should be relatively obvious. The structures of social platforms mediate the presentation of objects: that is, all “objects” appear embedded in, and placed in relation to, visible signals of the other’s desire (likes, up-votes, reblogs, retweets, comments, etc.). The accumulation of such signals, in turn, renders objects more visible: the more mediated through the other’s desire (that is, the more liked, retweeted, reblogged, etc.), the more prominent a post or tweet becomes on one’s feed, and hence the more desirable. Desire begets desire, much in the manner that Girard describes. Moreover, social media platforms perpetually enjoin users, through various means, to enter the iterative chain of mimesis: to signal their desires to other users, eliciting further desires in the process. The algorithms driving social media, as it turns out, are programmed on mimetic principles.

Yet it is not simply that the signaling of desire (for example, by liking a post) happens to produce relations with others, but that the true aim of the signaling of desire through posting, liking, commenting, etc. is to produce relations with others. This is what meme theory obscures and mimetic theory makes clear: memes, far from being autonomous replicators, as meme theory would have it, function entirely as mediators of social relations; their replication relies entirely on those relations. Recall that for Girard, the desire for any object is always enmeshed in social linkages, insofar as the desire only comes about in the first place through the mediation of the other. A reading of Girard’s analyses of nineteenth-century fiction or of ancient myth suggests that none of this is at all new. Social media have not, as the popular hype sometimes implies, altered the structures that underlie social relations. They merely render certain aspects of them more obvious. According to Girard, what stands in the way of the discovery of mimetic desire is not its obscurity or complexity, but the seeming triviality of the behaviors that reveal it: envy, jealousy, snobbery, copycat behavior. All are too embarrassing to seem socially, much less politically, significant. For similar reasons, to revisit Thiel’s remark, “social media proved to be more important than it looked.”

But so far, I have been expanding on what Thiel himself has said, which others have echoed. However, what accounts of Girard’s role in Thiel’s Facebook investment never mention is the other half of Girard’s theory, the half that Thiel was at Stanford to discuss in 2004: mimetic violence, which, for Girard, is the necessary corollary of mimetic desire. A follow-up post will explore this dimension of Girard’s thought, and reveal its relevance to Thiel’s agenda as an investor and “influencer.”