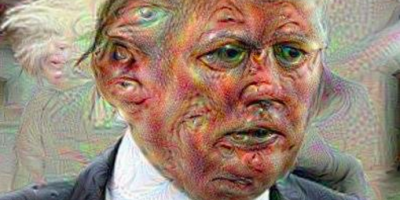 One of the most interesting and unimagineable ideas about the nature of reality in the 21st century is that we are living in a computer simulation. Philosopher Nick Bostrum posed the question in Philosophical Quarterly (2003) this way: given the enormous computing power of any posthuman civilization, and the likelihood that they would run simulations to better understand their evolutionary history, it is entirely possible that we are living in a simulation created by a higher intelligence. Since Bostrum’s essay was published, many theorists have laid out reasons for entertaining the hypothesis, which are typically grounded in the mathematic nature of our current understanding of the universe. But I think we’re overlooking the most compelling argument in favor of the simulation hypothesis to date: the meteoric rise of Republican presidential candidate Donald J. Trump.

To understand why I think Trump is all the proof we need that we are living in a simulation, we have to begin with one of the most fundamental questions of religious thought, theodicy; if there is a god, why does it allow evil and suffering to exist? Why not create a world of perfect harmony and happiness? Why would god subject its most faithful and righteous of servants, as in The Book of Job, to immense anguish? In Job’s tale, it is essentially to settle a bet with Satan—to prove that Job’s faith does not come from the blessings and wealth bestowed upon him, and will remain strong in the face of loss and sorrow.

The explanations for theodicy range throughout history. Polytheistic peoples saw human suffering as the result of squabbles and power grabs among the gods. The Abrahamic traditions cite original sin and the folly of Adam and Eve. Later religious scholars argued that, in order for humans to be made in the image of god, they must be granted free will, which opened the door to sin. Even the deists explained the problem of theodicy by arguing that god had merely created the universe and then left it to its own devices, thus never intervening on behalf of “the good.”

The simulation argument offers a much more straightforward answer: we’re an experiment. Or, an investigation of sorts, a mode of trying to understand causality and the factors that give certain civilizations some characteristics over others. Some simulations may strive to create the happiest civilization possible, others the most efficient, and still others the most self-destructive. Maybe we just got unlucky. Maybe, in some other file folder on some other hard drive, there is a happy little simulation where everyone gets a free puppy that never grows up and there’s orange soda in all the water fountains.

But we didn’t get the puppy-orange-soda universe. Nope, we got Trump.

Why does Trump prove the simulation hypothesis? First is the naked fact that his campaign is stranger than fiction. Trump operates outside all the bounds of politics-as-physics. He breaks every law that we know of, and yet continues to exist. And, as with the wave-particle duality of light or the hypothetical existence of dark matter, we must alter our explanatory models of the world to understand new phenomena.

Commentators have come up with hundreds of explanations for Trump’s popularity: white working-class discontent, rising xenophobia and persistent racism, distrust in the political class and other institutions, and even the power of name recognition in electoral politics. All fine analyses. But how do you explain this?

Or, perhaps the most bizarre entrance in nominating-convention history, this?

How do you caption this I don’t even know

Doesn’t it all seem a bit over the top? 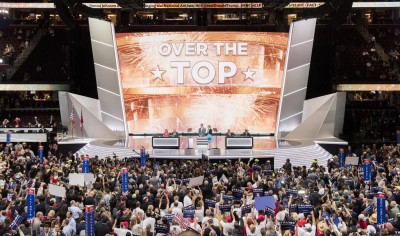 Actual screen when Trump won the requisite number of delegate votes. For real.

Anyone who has been paying attention to our long history of racism, sexism, xenophobia, and free market ideology should not be surprised that we are witnessing the rise of a political figure who embodies the ugliest characteristics of our society. But who could have predicted that it would look so utterly ridiculous? How can one of the gravest threats to the country in recent memory come in the form of this buffoon?

If we take the computer simulation hypothesis as a possible explanation, Trump is either an experiment or a glitch.

Perhaps Trump was introduced into the simulation to see how the current conditions would interact with this phenomenon. Perhaps our coding overlords took the experiment to the extreme, making the intervention as ridiculous as possible to see the effects. Maybe they’re having a bit of sadistic fun, blissfully ignorant to the fact that it is all too real to us. Or, perhaps, something further back—mass media or reality TV—was introduced, and Trump is a (il)logical conclusion of that earlier experiment.

I, however, lean toward the glitch hypothesis. One of the most basic existential questions in the history of human thought is what is real? Am I real? Is anything outside of me real? During the Enlightenment, we came up with complex models to deal with this question: empiricism, rationalism, scientific method and objectivity. More recently, other subjective, affective questions come to mind, specifically authenticity. From clothing and music to food and drink, the question of authenticity is ever-present. The mere fact that “authenticity” exists as a concept reveals our fear of the unreal, our distain for the seemingly artificial, or, at the very least, our need to value and hold on to something that confirms that we stand on solid, real ground.

This question of reality may be the kernel of the glitch—a tiny voice inside our consciousness that suspects that we aren’t real, a thought born of the unspoken realization that we are simulated.

But rather than an on-off switch, or a spectrum from real to not real, what if it is a circle? What if Trump is the point at which the circle meets, the unreal-real that solves the paradox of simulated reality? Reality TV was an answer to celebrity culture, to viewers wanting to see people like them on screen. As media studies scholars like June Deery have argued, reality TV reveals the fragility of “reality” as a construct, and “that it represents a longing for the real in the age of the virtual and digital” (See Deery’s Reality TV, 2015). Or, if you want to get really heady, see Jean Baudrillard’s work on simulation and hyper-reality. Tl;dr: reality is weird and complicated, especially with the proliferation of media.

Trump is an iteration of the feedback loop of reality that is the true original sin of our simulated humanity. Adam and Eve didn’t eat an apple—they asked if they were real. Like a song that gets stuck in your head, we haven’t stopped asking the question ever since. And while some of us look on horrified, asking “Is this really happening?” others cheer for the billionaire every-man who will save our country with unabashed “real talk,” who won’t kowtow to PC culture.

You may remember Magnasanti, the terrifying dystopian SimCity that used mathematical principles to create maximum population efficiency. Sims in Magnasanti lived bleak lives of high unemployment, no social services, and death at the age of fifty under a totalitarian police state. Or maybe you’ve trolled your Sims at some point by filling their house with fireworks, removing the doors, and making them set off the explosives. Or deleting the bathroom until they pee their pants. Or taking them for a swim and removing the ladder until they drown to death. Sure, it’s disturbing that lots of people actively look for ways to torture and kill their Sims, but it’s far more disturbing to consider that we are made in the image of our own “gods,” programmed to create chaos and destruction for a few laughs.

Maybe I’m grasping at straws, trying to explain away the sadness we all feel at the tragedies posted to our daily news feeds. I hope we aren’t living in a simulation. I hope the horrors of this world aren’t some experiment of a higher intelligence trying to figure out how to maximize their own potential. I hope we have some modicum of control over our own reality. I hope that, even if we are in a simulation, we aren’t deterministically coded, and can creatively alter our computerized universe. I hope we can undo this historical moment, before President Trump gets to “restore law and order,” as he ominously promised in his acceptance speech, remotely delivered on a giant screen at the RNC on Tuesday. I hope we can stop it.

I hope nobody pulled up our ladder.