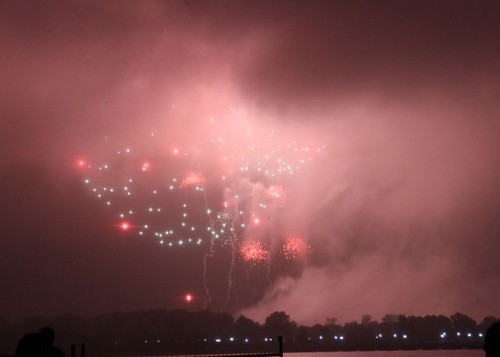 This July 4th, PBS viewers in the DC metro area were outraged to be reminded of the fact that they were watching television.

It’s actually not quite that simple, though it’s fun to phrase it that way. Here’s what happened: this past Monday was an extremely muggy and cloudy one in our neck of the woods; in other words, not at all the idea climatic conditions for a fireworks display. PBS, in something of a bind regarding how to maximize the spectacle for its live broadcast of the Independence Day celebration in front of the White House, elected to include archival footage of past fireworks displays with its live broadcast of the currently-happening fireworks.

Specifically, people who took issue with the decision claimed that it was an act of fakery, that it was a cheap move and made the broadcast less “authentic”. That it was almost somehow a lie. PBS responded on Twitter with: “We showed a combination of the best fireworks from this year and previous years. It was the patriotic thing to do.”

I’m going to leave aside the interesting fact that PBS is characterizing this move as “patriotic” and instead focus on the two other things that I find interesting.

First, these viewers forgot the Baudrillardian truth about TV and indeed about all media and really kind of everything ever: it’s basically “fake” by definition. What a viewer is shown is almost always carefully edited and packaged, or at the very least presented with a specific intent in mind. Even when it comes to live TV, there is no such thing as a fully objective and solely factual depiction of what’s actually going on. This frequently has little to do with a political agenda (the vitally important patriotism of this particular decision aside) and far more to do with spectacle, and PBS’s intent in showing the fireworks was to provide exactly that.

I think the people who were offended by what PBS did believed that PBS’s primary goal was to show something as it truly was. And I’m not saying that PBS didn’t have that goal at all. But I doubt that – consciously or unconsciously – it was at the top of their list.

People like to believe that in cases like this, what they’re seeing is “real” and “true”. It’s jarring and even disturbing to be reminded that they can’t be sure of that, and that indeed they should assume that what they’re seeing is never real or true. That by definition it basically can’t be. People want to buy into an illusion – an illusion that PBS is selling, which it is obviously not alone in – and they become uncomfortable and upset when the illusion is destroyed.

Which leads me to the second thing that strikes me about this: the fact that it was PBS.

As a long-time PBS viewer, I get the distinct sense that someone watching the channel might expect the exact opposite of a focus on spectacle and selling a constructed package of imagery, and far more of a focus on soberly presenting things with a commitment to authenticity. Given the culture of PBS and the probable cultural affiliation of many PBS viewers, I think it’s reasonable to believe that whether or not PBS intends it, there’s a kind of implicit contract between the network and the people watching it, as well as a desire for authenticity in particular on the part of those people.

So I think what we have here is in some respects a twofold destruction of illusion and a perceived twofold betrayal: What people prefer to believe they’re seeing in this kind of broadcast, and what a specific cultural product promises the people consuming it. When I found out about this, I almost immediately wondered how someone watching CNN, MSNBC, or Fox News (oh my lord Fox News) would be likely to feel if the same editorial decision was made.

And I’d still like to ask PBS what exactly they meant by “the patriotic thing to do”. Maybe thick, low clouds are un-American.