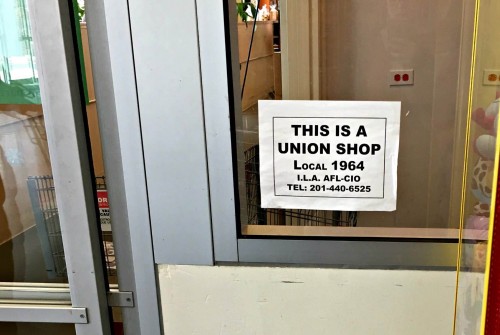 As I walk in, I glance at the sign that says “Local 1964 AFL-CIO” and smile at the greeter who stands by the front door. Walking down the aisle I peruse the household cleaners. All natural, $4; organic, $9; wood-safe, $3.Taken slightly aback by the cost, I pull out my phone and bring up the same products in the Amazon app: $1.50 difference. I pause to think about that $1.50 and spiral into an internal dialogue about capitalism and my place within it.  Not only do these chemicals eventually go down my drain back into a water source that I share with my neighbors, but the money I spent represents my values. $1.50 is less than the price of a small ice cream, and also, apparently, the margin necessary to pay the local grocery workers a living wage.  I pick up the product off the shelf— the $4 natural multi-surface cleaner—and continue down my list.

The presence and use of Amazon’s apps on my phone are part of a larger socioeconomic process. As gentrification runs rampant in my small city, the local use of Amazon and other delivery apps increases and local union grocery stores have closed one after another, resulting in many unemployed people. One of the many insidious aspects of late capitalism is its ability to force a competition between time-saving and wage-saving.  The convenience of technology necessitates further trust in and reliance on the rest of society. Or, as PJ Rey puts it: “There is no such thing as a lone cyborg.” What we often ignore, however, is how our choice of convenience simultaneously necessitates that our local community also become more reliant on large infrastructures and less self-sustaining. As Christian Fuchs explains in Labor in Informational Capitalism and on the Internet, the unemployed class is an inevitable byproduct of technological progress in a capitalist society that must be continuously deprived of wage labor and capital.

It is difficult to connect Amazon saving us $1.50 on surface cleaner to rising unemployment numbers. Throughout my life in capitalist cultures, capitalism has taught me, us, to think that saving $1.50 every time we shop is savvy. Bargain hunting has even been elevated to televised sport: Design on a Dime or Extreme Couponing come to mind. If we know anything about a commodity it is how much it costs and speculations on how much we can underpay are seen as responsible financial planning. What is not under consideration is which product does a better job of preserving people’s opportunities to work with dignity. I and everyone else have little information about which soap helps retain collective bargaining power or which brand of toilet paper supports union-busting political action committees. The social life of things prior to their arrival on shelves is purposefully obscured by a veil of individual consumerism.

Corporations like Amazon have reinforced this individualism by investing in technology that emphasizes the convenience for the individual consumer who shops online. Inherent to their designs is the hope that Amazon will make our purchases thoughtless and instant. The less time we spend making a decision, the fewer opportunities there are to second-guess the implications of our actions. Let me be clear, this convenience is what we love about Amazon. I forget things a lot, and when I do remember to buy something, it is seldom while I am at the store; the Amazon app and Free Prime Shipping have almost always had my back in those times. In the end, “Free Prime Shipping,” Amazon Pantry, and Dash Buttons cost something to someone, and we are all affected by the price we pay for the convenience of “free.”

If you are anything like me (graduate student, part-time jobs) you have probably felt like you have “benefited” from Amazon’s low (i.e. not profitable) prices at some point. I admit to buying books, board games, and other random items from Amazon pretty regularly. In moments of price comparison, Amazon beats my other options in its quest for my money more often than I would like to admit so publicly (but I know the data is out there somewhere). But do we really benefit from Amazon’s convenience? There are a couple of ways to look at this. One way is the old Econ 101 fairy tale of every individual maximizing utility and seeking out the lowest price for the best product. On the other hand, we can take a Marxist perspective and examine how the capitalist class is actually exploiting all of us—not just those laborers who are out of work when the grocery stores close—through its promotion of individual convenience.

So how does Amazon not just exploit those whose jobs are threatened by the convenience market that Amazon provides, but exploit those of us who use the service, too? Well, for one, these two groups—those who use Amazon and those who Amazon puts out of work—are not mutually exclusive. Those in positions of economic precariousness may well rely on the discount goods and cheap/free delivery that Amazon provides—just like the local shopkeeper may have to patronize the Walmart that threatens hir livelihood.

Second, free and cheap delivery is not free or cheap, but paid for with the currency of personal data. Amazon does not just know what I buy, it knows what I want, how much of it I want, and when I think about purchasing what I want. Amazon knows my birthday and my relatives’ birthdays. And with Charmin’s dash button, Amazon can know an uncomfortable amount about a household’s bathroom habits. Economic value, Christian Fuchs notes, is produced by the commodification of users and audiences. Capital is (re)produced for Amazon through reviews, purchase history, and other personal information; they are not making a profit from the majority of their sales. Rather, they are trading short-term profits for the the long term advantage of being indispensable to our buying and spending habits. Therefore, Fuchs argues that even yuppie consumers are included in this exploited (non-capitalist) class. Amazon customers don’t just buy goods, but freely give the capitalist their data. Each purchase is therefore an act of uncompensated labor.

This relationship between conveniences, data, and wages are complex but getting out of the problem is fairly simple. “None of this is a problem” writes David A. Banks, “if we decouple work from individuals’ means of subsistence. If extended unemployment were not tantamount to a slowly unfurling death sentence, then the rise of robot deliveries would be very desirable save for those that gleam some sort of emotional reward for delivering the mail.”

How would we ever go about disconnecting the means of subsistence from the modes of production? If we are actually members of the multitude and Amazon actually profits from our mere potential as consumers, what can we really do but submit to the corporate overlords? According to Fuchs, exploitation of prosumers, “has the potential to be channeled into political demands, such as the demand for a wage for all unpaid knowledge workers, which is equivalent to the demand for the introduction of a universal basic income guarantee.” Fuchs argues that, united, we can reassert our collective economic power by resisting our own exploitation. Unlike Fuchs, I’m not ready to say that Twitter and Facebook need to start paying users for their content production. I believe this would probably entrench us all much more fully in our own oppression by transforming leisure time into paid participation in yet another market designed to further capitalist interests. Nevertheless, I agree with Fuchs that a Marxist outlook can help us to reflect on the fact that our online leisure and shopping activities are, in fact, forms of labor. When given the chance to think about concrete ways we as tech-users could leverage this labor in acts of resistance, the opportunities are vast.

As content creators, users of Facebook, Twitter, and even Amazon are uncompensated workers. Imagine one day, even one hour, where the internet goes silent and content is not produced. What if bloggers protested google ads for higher wages by striking?  With 700,000 weekly tweets, Scandal is certainly not paying everyone for their buzz on Twitter. If that’s not collective economic power, I don’t know what is. But even if we are not a member of a blogger’s union and don’t often find ourselves in hugely popular hashtag conversations on Twitter, we have plenty of moments when we can question the status quo.

Despite convenience and low cost being tantalizing and often, necessary for my own functioning in everyday life, the moments when I open the Amazon app are as much opportunities for reflection as they are for impulse purchases. The reality of a shared car, too long of a distance to walk home with laundry detergent, and limited time, let alone money, have all played a role in my Amazon Prime membership quickly “paying for itself.” But the person I really want to be is the thoughtful, neighborly cyborg who smiles to a greeter at a grocery store who can pay rent and feed his kids. I want to be a person who opens the Amazon app in moments of resistance—to see how much I am willing to sacrifice for my values—rather than temptation. If the price of becoming who I want to be is the price of a living wage, I will pay my $1.50 willingly.

Nora Devlin is too multifarious to describe herself in only two sentences. Tweet her @NoraAnneDevlin and read her occasional ramblings at noradev.tumblr.com.